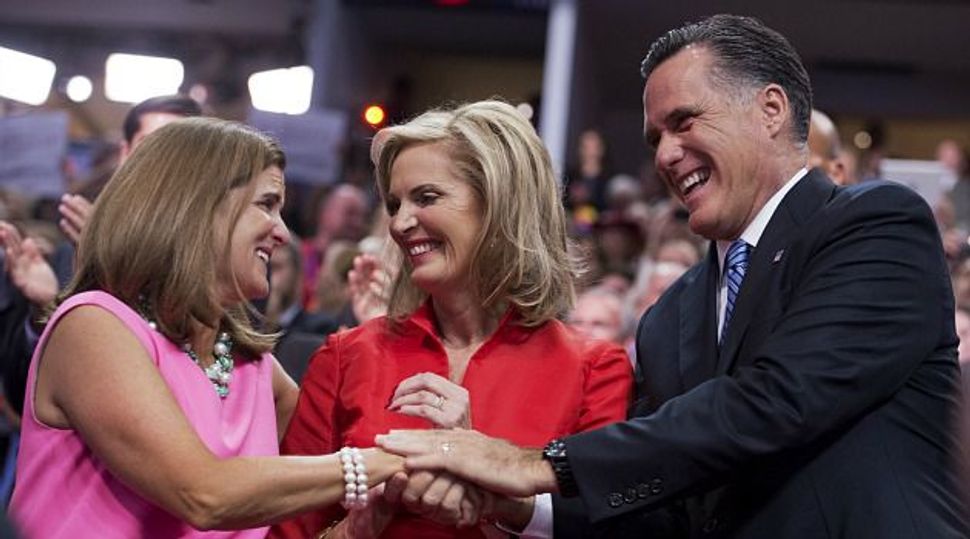 Women?s World: Mitt Romney is hoping to chip away at Barack Obama?s dominant support among Jewish women. The GOP hopes to shift the discussion from reproductive rights and other ?women?s issues,? to broader topics like the economy and Israel. Image by getty images

The supposed Republican “war on women” has put Jewish GOP women in the party in the crossfire: They are Republicans in a Jewish community that is largely Democratic, and social moderates in an increasingly conservative GOP.

Republican leaders gathered here for their national convention believe they have found a way to win over the hearts of Jewish women. Their solution? Talk about the economy or Israel or health care. Talk about everything except women’s rights.

“I don’t think we elect the president of the United States based on these social issues,” said Arlene Herson, an enthusiastic supporter of Mitt Romney from Boca Raton, Fla. “The economy is way more important than any social issue.”

Mary Anne Carter, a Republican activist from Knoxville, Tenn., called it “condescending” to focus on social issues when Jewish women are far more deeply affected by the state of the economy and by issues of war and peace.

Jewish women may be among the most problematic constituencies for the Romney campaign. Polls show that in the general population, the gender gap works in favor of Barack Obama, who has a 10% lead over Romney among women voters overall. And Jewish women, according to data collected throughout the years, are overwhelmingly aligned with Democrats. Analysis of the 2008 elections, prepared by nonpartisan The Solomon Project, found that more than 80% of Jewish women voted for Obama, a support level higher than that of Jewish men and of women in general.

Research conducted in the past decade in several communities was consistent with this finding, showing that at least three out of four Jewish women identified with the Democratic Party.

“To a big extent, it’s because of the social issues, because of women’s rights,” said Ira Sheskin, director of the Jewish Demography Project at the University of Miami.

Recent news events have made a challenging situation harder for the GOP.

Controversial remarks made by Missouri U.S. Senate candidate Todd Akin on rape and abortion, and Republican lawmakers’ opposition to including birth control funding in health insurance, have brought women’s rights front and center in this election cycle once again.

The GOP platform, adopted by the convention on August 28, states that the party will oppose funding or subsidizing health care that includes abortion coverage. It also declares that “the unborn child has a fundamental individual right to life which cannot be infringed.”

These views, argued Nancy Kaufman, chief executive officer of the National Council of Jewish Women, run contrary to the consensus within the Jewish community.

“This is as clear as day,” Kaufman said. She was scheduled to speak on a Republican panel debating the party’s platform on women’s issues. The discussion was canceled, leaving unchallenged the platform with strong anti-abortion language. “What I would have said is that we see religious freedom and reproductive rights as inter twined,” Kaufman said.

Steven Windmueller, a professor at Hebrew Union College-Jewish Institute of Religion, agreed that this approach represents the view of all Jewish women’s organizations. “They all hold consistent liberal values on these issues,” he said.

But Republicans still believe they can chip away at Obama’s lead among Jewish women.

The struggle may have gotten just a little bit easier with the recruitment of some powerful and deep-pocketed Jewish women to lead it.

In a pedestrian strip across the road from the Tampa Bay Times Forum, which hosted the convention, a sign directed delegates to the Dr. Miriam Adelson “Woman Up!” Pavilion, which was set up by the conservative group YG Network. The carefully designed retreat was intended to provide conservative women attending the convention with a place to discuss politics from a woman’s perspective.

It was named in honor of Miriam Adelson, wife of Jewish casino billionaire Sheldon Adelson, who, through his multimillion-dollar super-PAC donations, is responsible for many of the Republican attack ads against President Obama. Miriam Adelson is a full partner in the spending spree, which made the couple the top ranking donors from outside groups to the Romney campaign. As such, she is perhaps the most powerful nonelected woman in the party.

“She puts her money where her mouth is,” Carter, policy director of the YG Network, told CNN.

“Don’t talk to women only about contraceptives,” Carter told the Forward, ticking off a list of GOP talking points, like an economic downturn that, in many cases, has a greater impact on women than on men, energy and fuel prices, and a defense policy that affects thousands of women serving in the military. “We want to fight this false war on women,” she said.

Stereotypes, however, apparently die hard. GOP women seeking empowerment could also indulge in a beauty salon set up for their use at the YG’s women’s pavilion and in a fashion show reception thrown for Jewish Republicans during the convention’s opening day.

To this list of women priorities, Herson added the issue of Israel, which she believes is a concern for all Jewish voters, female and male. She believes that Romney’s support for Israel is stronger than that of Obama, and that this issue will resonate with Jewish women voters come November.

Still, in debates with fellow Jewish women, Herson, a lifelong activist with the Republican Jewish Coalition and a former appointee to the U.S. Holocaust Memorial Museum committee, finds herself having to respond to arguments against Republicans’ positions on reproductive rights and birth control.

Organizers carefully crafted a similar message throughout the convention, as speakers directed their addresses to women voters, speaking to them about the economy, foreign policy and health care, not about social value issues.

Ann Romney, who has rarely spoken in public before the convention, made a personal appeal to women in her August 28 speech. The possible future first lady stressed the toll the recession has had on women. “Everything has become harder,” she said. “We’re too smart, and know that there are no easy answers, but we’re not dumb enough to accept that there are not better answers.”

Lynn Lechter, a board member of the RJC’s women’s committee, said Ann Romney “stole the show,” especially with her engaging account of balancing work, faith and family life.

Lechter, who is from suburban Philadelphia, conceded she has an uphill battle winning over moderate Jewish women. “I try to talk to Jewish women and say, ‘What about the economy, what about Israel?’ They say, ‘I don’t care, I care about abortion,’” Lechter said.

She tells them to focus on bigger issues and set aside reproductive rights for now.

With Obama, “you’ll have a women’s right to choose with no country, or God forbid, with no Israel,” she said.