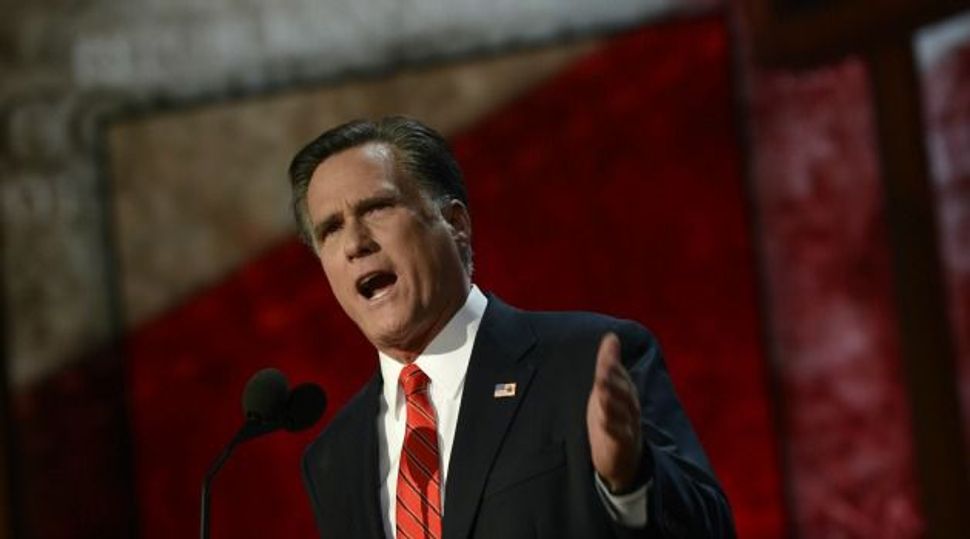 Mitt?s Message: The GOP convention ended with a rousing cry: We can do better. Does Mitt Romney?s message have a chance with Jewish voters? Image by getty images

Republicans spent three evenings at their convention hammering home their message: After four years of leadership failures, Mitt Romney will restore America to a position of strength, confidence and unity – at home and abroad.

He said that the “Obama economy has crushed the middle class.”

On foreign affairs, Romney warned that the president’s approach to the Iranian nuclear issue had left Americans “less secure.” He accused Obama of having “thrown allies like Israel under the bus.”

Romney repeatedly invoked imagery of Americans and their children sleeping peacefully. But none of Romney’s invocations of peaceful slumbers were in the present tense.

Romney waxed elegiac about Americans who went to bed after Neil Armstrong’s 1968 moon landing “knowing we lived in the greatest country in the history of the world.” He recalled memories of waking up to his young sons scattered asleep throughout the parental bedroom. And he expressed a conditional hope: “If every child could drift to sleep feeling wrapped in the love of their family – and God’s love — this world would be a far more gentle and better place.”

After telegraphing those images, Romney pivoted to issues that could lead to nightmares.

“Every American was relieved the day President Obama gave the order, and Seal Team Six took out Osama bin Laden,” he said. “But on another front, every American is less secure today because he has failed to slow Iran’s nuclear threat. In his first TV interview as president, he said we should talk to Iran. We’re still talking, and Iran’s centrifuges are still spinning.”

Romney warned that Obama had let down American allies and been timid in dealing with foreign adversaries.

“President Obama has thrown allies like Israel under the bus, even as he has relaxed sanctions on Castro’s Cuba,” he said.

Romney’s commitment to Israel and criticisms of Obama’s record on this issue were recurring themes in Tampa. On Wednesday evening, the convention played a one-and-half minute video focused on Romney’s July trip to Israel. That night, Sen. John McCain (R-Ariz.), the 2008 Republican presidential nominee, and former Secretary of State Condoleezza Rice both cited Israel in discussing allies that they said needed to be able to count on American leadership.

But foreign policy came only at the end of a speech that was, like the convention itself, largely focused on introducing the former Massachusetts governor to voters and assailing Obama’s record on the economy and the president’s past comments on what the creators of businesses owe to society.

Social issues, meanwhile, got short shrift at the convention. Staunch social conservatives, such as former Arkansas Gov. Mike Huckabee and Romney primary rival Rick Santorum, alluded to abortion and same-sex marriage only briefly in their addresses.

In his own speech, Romney – who supported abortion rights as governor of Massachusetts before later switching his position – included only a passing two-sentence reference telegraphing his opposition to abortion and to same-sex marriage, as well as his support of religious institutions resisting the Obama administration’s mandate guaranteeing birth control coverage for employees.

“As president, I will protect the sanctity of life,” he said. “I will honor the institution of marriage. And I will guarantee America’s first liberty: the freedom of religion.”

The birth control coverage mandate and the religious freedom concerns of the policy’s opponents was alluded to by several speakers.

The convention was also book-ended by prayers delivered by public critics of the Obama administration’s policy. On Tuesday, the hurricane-delayed convention’s first full day, the invocation was offered by Rabbi Meir Soloveichik, a rising Modern Orthodox star from a distinguished rabbinic family who testified before Congress against the policy. On Thursday evening, the convention concluded with a benediction from New York’s Cardinal Timothy Dolan, who as president of the U.S. Conference of Catholic Bishops has been in the forefront of the opposition to the policy.

While social issues were not the main focus at the convention podium, Democrats have made the issue of abortion rights a signal element in their pitch to Jewish voters. The Republican Party’s platform opposed abortion, without mentioning exceptions for rape and incest.

The Republican Jewish Coalition’s executive director, Matt Brooks, said that Democrats’ emphasis on abortion amounted to “scare tactics,” claiming that past Republican presidents have not changed the fact that abortion remains legal and that this reality was not going to change. “Being pro-choice does not mean that is the single most important issue you are going to vote for,” Brooks said.

In Tampa, Jewish Republicans, who tend to trend moderate on social issues, were sticking with their party despite its opposition to abortion and same-sex marriage.

“We are more and more an integral part of the party,” said Rich Weissman, 58, who was attending both as a member of the RJC and the Log Cabin Republicans, a gay Republican group. “Over time, things like gay marriage will evolve,“ said Weissman, the owner of a data analytics business in Portland, Ore.

But Romney’s main emphasis, in any case, was on American families and their bottom lines. “President Obama promised to begin to slow the rise of the oceans,” he said, and paused with a smirk, inspiring a rumble of laughter throughout the Tampa Bay Times Forum. He continued: “And heal the planet. My promise is to help you and your family.”

Romney outlined a five-point plan that projected energy independence by 2020; promised education reforms to give parents choice in which schools their children attend; pledged new trade agreements with other counties, but warned of “unmistakable consequences” for those that cheat; vowed to reduce the deficit; and called for helping small businesses by reducing their taxes, simplifying regulations and repealing Obama‘s signature health care plan.

National security was a preeminent issue the 2004 and 2008 elections; in each, war heroes who made their biographies central to their pitch lost to candidates who successfully made the case that their national security policies, if not their experience, were likelier to secure the nation. Romney’s pitch has been to first emphasize personal and financial security, and then to underscore his argument that such security is a predicate for a safer America.

“That America, that united America, can unleash an economy that will put Americans back to work, that will once again lead the world with innovation and productivity, and that will restore every father and mother’s confidence that their children’s future is brighter even than the past,” he said, wrapping up his speech to burgeoning cheers. “That America, that united America, will preserve a military that is so strong, no nation would ever dare to test it.”

The single convention speech that was dedicated purely to foreign policy, by Rice, the former secretary of state, also had an economic emphasis.

“There is no country, no, not even a rising China, that can do more harm to us than we can do to ourselves if we fail to accomplish the tasks before us at home,” she said.

At least as far back as his first bid for the 2008 GOP presidential nod, Romney has taken a beating from detractors who deride him as colorless. The convention sought to make a strength of that perceived weakness: Drop the risky guy with the lofty visions. The boring, safe guy is the one to address your immediate concerns – jobs and the economy.

Romney’s speech synthesized the two overwhelming themes of the convention: The need to turn the economy around, which underpinned the keynote speech of the vice presidential nominee, Rep. Paul Ryan (R-Wis.) Wednesday night, and that Romney is the safe and likeable choice to make that happen, underscored in the keynote speech in which his wife, Ann, introduced him on Tuesday night.

Brooks of the RJC said the party was confident that the convention’s rollout of Romney, the family man, would help put him over the top come Election Day.

Voters “understand and get what’s at stake, they understand and get, they’re a lot more sophisticated than pundits give them credit for,” Brooks said at a press conference for Jewish media. “This well be a referendum on the job that the president is doing.”