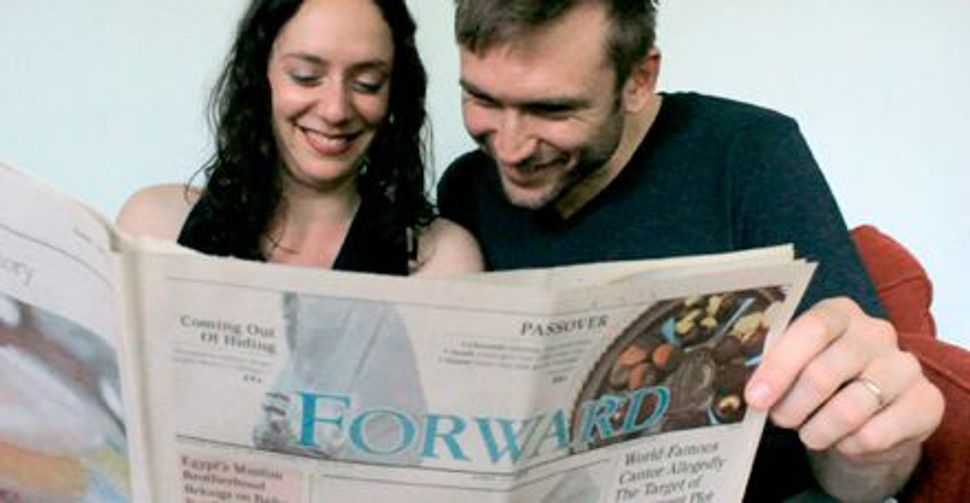 When New York freelance writer Abigail Rasminsky published a piece in the Forward about a nontraditional Passover Seder that she had hosted with a group of non-Jewish friends, she never expected she’d get a pen pal. Certainly not one who lived on a different continent. Least of all, one that she’d end up meeting at a bus stop, surviving a hurricane with and, eventually, marrying.

And all that from a newspaper article.

Her admirer was one David Michael Goldstein, an American graduate student of linguistics living in Germany, where, he says, “I didn’t know anyone.” With plenty of free time on his hands, he was able to do something he’d long wanted to do: attend synagogue. Despite his name, Goldstein was not raised Jewish. But Judaism was beginning to intrigue him, so when a mutual friend saw Rasminsky’s Forward article about gathering together different backgrounds for a Seder, she sent it to Goldstein — and unwittingly played matchmaker.

Goldstein was moved by Rasminsky’s writing and knew that he wanted to get in touch with her. So, through their friend he sent her a quick email — or maybe not so quick.

“It was too long,” he admitted, smiling. But Rasminsky, though surprised, was unfazed.

“I didn’t really know what was going on, but I wrote him back anyway,” she said.

One email turned into several, and eventually blossomed into a whole online, transcontinental correspondence.

Finally they decided to meet, and chose a weekend for Goldstein to fly to New York. Unfortunately, that same weekend, Hurricane Irene chose to visit. In a fateful phone call late Friday night, the two decided that Goldstein should take the 7 a.m. bus up to the Catskills, where Rasminsky was staying with her family — her entire family.

“He met my parents, my sister, her husband, my niece and nephew — he met everybody within an hour. And then everyone left,” Rasminsky recalled. “We were alone in this house, on a hill, preparing for a hurricane together, and we had never met.”

Goldstein was nervous about making the right impression. “I know I’m not an ax murderer, so I just have to convince her of that,” he recalled thinking. “And if she’s an ax murderer, well, thankfully I’m bigger.”

After the storm and the Rasminsky clan had been successfully navigated, the couple returned to the city for a few weeks to get to know each other. He visited again in October, she went to Munich in November, and step by step the online relationship was becoming the real thing — entirely free of ax murders. To show that their relationship was the real (offline) thing, Goldstein even gave Rasminsky a symbolic birthday present: a journal of all their emails, which he’d written out by hand.

From there, it was only a matter of time before they were ready to tie the knot. “We were both at the point where we were looking for real partners,” Rasminsky remembered. “We were very straightforward from the very beginning. It was almost like an arranged marriage, but we arranged it ourselves.”

But for Rasminsky to be married in time to move to Germany with Goldstein, the planning had to be quick. Her father suggested the logical location: the mountain house where they’d been stranded.

“We were sort of shocked that we didn’t think of it ourselves,” Rasminsky said.

After marrying on July 22, the couple is already working on plans for a second wedding for friends who couldn’t make the first ceremony. A story about their nuptuals appeared in the New York Times weddings section.

After finding their future spouses through the Forward, David and Abigail Goldstein can now look forward to a future — together.