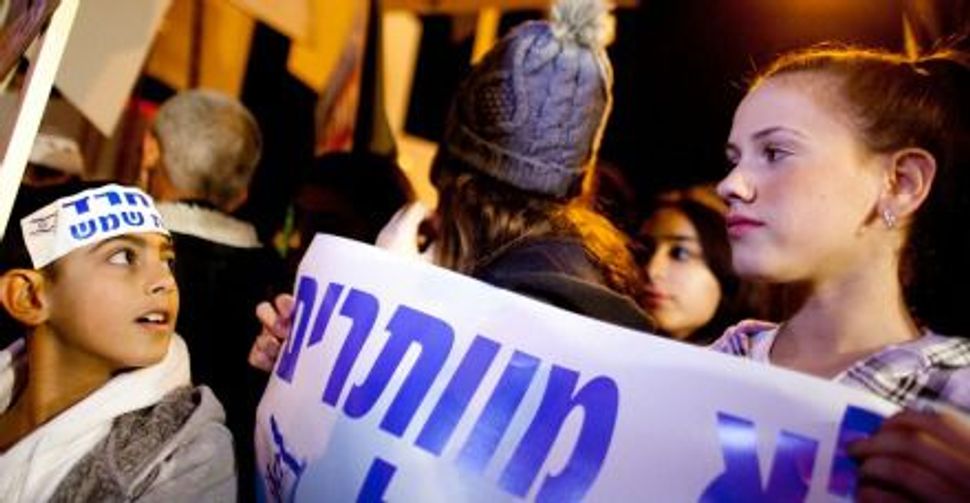 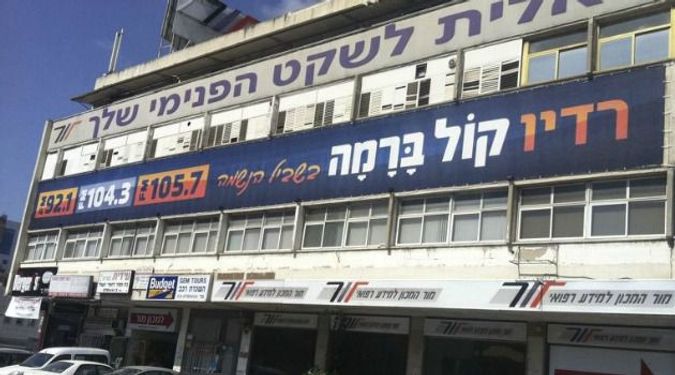 No Women Allowed: The offices of Israel?s ultra-Orthodox Radio Kol Barama look pretty ordinary. But there?s one thing that?s striking about its programming: the lack of women on the air. Image by nathan jeffay

As on talk radio everywhere, the announcers on Israel’s Radio Kol Barama are constantly urging listeners to call in — so long as they’re the correct gender.

The most popular religious radio station in Israel, Kol Barama, a biblical phrase that in colloquial Hebrew today means “quality voice,” took to the airwaves three years ago with a clear policy: Unlike its competitors, it would broadcast only male voices. This meant not just callers; there were no female presenters, studio guests or interviewees. Even newscasters using snippets of public speeches were to choose from only men’s speeches.

The station’s policy remains intact, with the exception of two concessions that Kol Barama made to the state regulator this past April. Of its 144 hours of programming a week, it has designated five hours for phone-ins during which women may talk. A small number of female public figures are also now featured through recorded material or interviews — on average one every 13 hours, according to figures supplied to the Forward by the regulator.

On August 28, an Orthodox women’s rights group, Kolech, filed a $26 million class action suit against the station, demanding damages for female listeners. The group hopes its suit will lead to full gender equality in the station’s output. “This is just a way to push women aside and silence them in public, and it’s unacceptable legally and morally,” Kolech’s legal adviser, Riki Shapira, told the Forward.

Israel is a nation of radio junkies. On buses, at the stroke of the hour, passengers hush and drivers crank up the volume for everyone to hear the news. With the rise of the Internet, radio has become a somewhat less important source of news and information. But it remains central to the Haredi, or ultra-Orthodox, community, which frowns on the Web yet still thirsts for instant information and nonstop entertainment.

Kol Barama tapped into this market with its 2009 launch, offering Sephardic Haredim everything that its supervisory three-rabbi panel decided they need and want to know. There are news reports, political updates, informative programs on practical topics from economics to household maintenance, general discussions, music segments (featuring songs sung by men) and a lot of religious lessons.

The station, broadcasting from Bnei Brak on FM to about half of Israel and all the main Haredi population centers, is both a commercial and an ideological success. Large Israeli companies advertise, eager earn the Haredi shekel from the 200,000 listeners a month — one in 40 Israelis. And while it is not officially tied to the Sephardic Haredi political party Shas, its management is keen to promulgate the worldview of the party’s spiritual mentor, Rabbi Ovadia Yosef.

The station’s lawyer, Chaim Yashar, stated in an interview with the Forward that forcing the station to institute full gender equality “will take away the characteristic of the station as a Haredi station because it would not be following what the rabbis instruct.”

He argued that Kol Barama acquired its broadcast license as an openly Haredi station, making it clear that it would follow rabbis’ dictates. Haredi rabbis approved the concessions in April, but they take the view that Halacha does not permit complete equality; indeed full female integration would constitute a demand for the station to break its religious principles, Yashar said. In his view, the principles of “freedom of the press and freedom of expression” should empower a broadcaster using the public airwaves in a multicultural society to program according to its religious convictions.

Shapira rejected this logic. “We say that there isn’t any religious prohibition against hearing women talking on radio. The whole thing is just trying to be more extreme in how you keep Torah and Halacha.”

Yashar said that the prohibition against women talking on radio stems from a verse in Psalms: “The honor of the king’s daughter is within.” This is interpreted to mean that Jewish women should not be given public exposure. He acknowledged that not all rabbis interpret the verse in this way, but claimed that the station must follow its own rabbis’ interpretation.

He also argued, “By forcing [the station] to change, people will stop listening.” Listeners from this part of Israeli society want a predominantly men-only output, he explained, and would mistrust the overall integrity of the station and the suitability of its programming if the station were to defy its rabbis on gender.

But Kolech claims to have identified opposition to the men-only practice among listeners. After commissioning the Sarid Institute for Research Services to survey attitudes of female listeners, it found that 32% are opposed to the policy, to varying degrees. In fact, it based its claim for damages on this poll, demanding 1,000 to 2,000 shekels for each female listener who is opposed, depending on the strength of her opposition. Kolech rejects the idea that dissatisfied listeners should simply change stations. Doing so, the group argues, is actually not an option, because Kol Barama is the only broadcaster approved by the top rabbis of the Sephardic Haredi community. For Sephardi Haredim, it is the only kosher listening option, Kolech says.

Kol Barama rejects the polling data, saying that many female listeners have expressed support for the policy.

Kolech also accuses the state regulator of complicity in the inequality on Kol Barama. The concessions that the station made to the regulator in April were part of a deal that allowed women to remain excluded in all other parts of programming. According to Kolech, the regulator — the Second Authority for Television and Radio — has thereby rubberstamped the violation of a 2000 law prohibiting discrimination in goods and services. “Their role is to guarantee radio stations are keeping the law, and they cannot give permission to break the law,” Shapira said.

Meytal Segev, spokeswoman for the broadcast authority, responded that “The women’s organizations don’t see the whole picture that we see; they don’t see the place that Kol Barama comes from.” She said that the concessions in April were significant in view of the culture of the station. “This is not the end of the way,” Segev said. “We still expect more to happen. But it’s a long process, because you are talking about a closed society.” She declined to say what the regulator’s final target is.