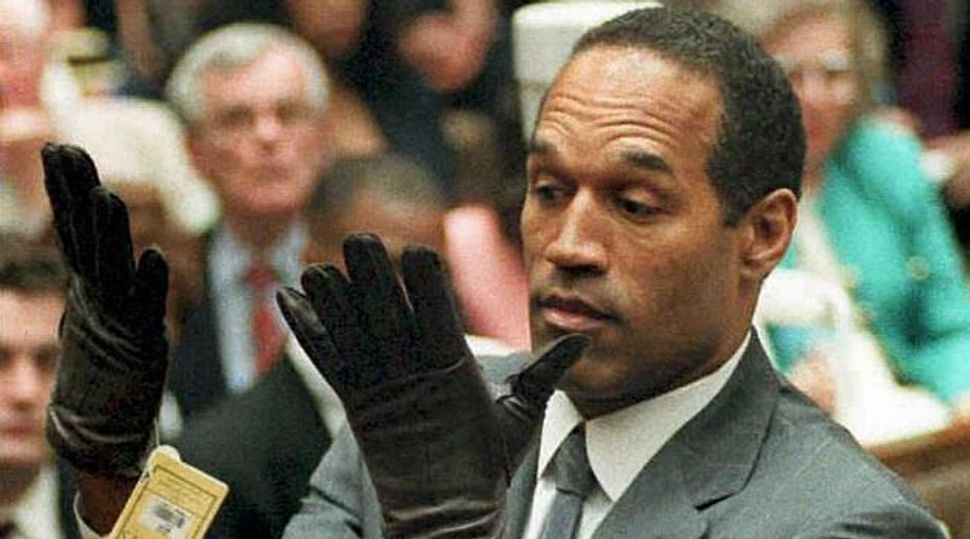 You Must Acquit: O.J. Simpson struggles to put on glove in famed episode of 1995 murder trial. Image by getty images

Nearly 17 years after the “if it doesn’t fit, you must acquit” episode, ex-prosecutor Chris Darden claimed late defense attorney Johnnie Cochran tampered with the glove, helping the ex-football star walk away from a murder charge.

Dershowitz called the claim that the defense had an opportunity to tamper with the gloves “a total fabrication” and said “the defense doesn’t get access to evidence except under controlled circumstances.”

“Having made the greatest legal blunder of the 20th Century,” Dershowitz said of Darden, “he’s trying to blame it on the dead man.”

Former Los Angeles deputy district attorney Christopher Darden has accused Simpson defense lawyer, the late Johnnie Cochran, of “manipulating” one of the infamous gloves that the prosecution said linked Simpson to the grisly double murder of his ex-wife Nicole Brown Simpson and her friend Ronald Goldman.

After Simpson struggled to fit the gloves on his hands – in one of the defining moments of the racially charged trial that captivated the nation – Cochran famously admonished the jury, “If it doesn’t fit, you must acquit.”

On Thursday, during a panel discussion about the trial at Pace Law School in New York City, Darden, a member of the prosecution team, declared: “I think Johnnie tore the lining. There were some additional tears in the lining so that O.J.’s fingers couldn’t go all the way up into the glove.”

Darden said in a follow-up interview on Friday that he noticed that when Simpson was trying on a glove for the jury its structure appeared to have changed. “A bailiff told me the defense had it during the lunch hour.”

He said he wasn’t specifically accusing anyone, adding: “It’s been my suspicion for a long time that the lining has been manipulated.”

He said he had previously voiced similar concerns in TV interviews, but could not recall the details.

Darden’s incendiary charge surprised key participants in the trial and related legal action. Harvard Law Professor Alan Dershowitz, who was a member of Simpson’s defense team, and Paul Callan, who represented Nicole Brown Simpson’s estate in a successful civil trial against Simpson, said it was the first time they had ever heard the allegation.

Darden’s remarks came after Dershowitz, a fellow panelist, called Darden’s decision to have Simpson try on the glove for the first time before the jury “the most stupid thing” a prosecutor could have done.

Dershowitz said that if Darden had evidence that there had been tampering, he would have had an ethical obligation to report the alleged misconduct. He also questioned why Darden hadn’t filed a grievance with the state bar association.

Darden responded by saying that this would have been a “whiny-little-snitch approach to life” and that was not what he believed in because it didn’t change anything.

The event was part of a “Trials and Errors” series, co-sponsored by Pace Law School and the Forum on Law, Culture & Society at Fordham Law, that examines America’s most controversial cases. Also on the panel were Goldman’s father, Fred Goldman, and his sister, Kim Goldman.

Derek Sells, the managing partner of Cochran’s old law firm, The Cochran Firm, did not respond to requests for comment.

A call to Cochran’s daughter, Tiffany Cochran Edwards, who is a communications director for the firm, was not immediately returned. Cochran died in 2005 from a brain tumor at age 67.

Simpson was acquitted in the double murder case despite what prosecutors described as a “mountain of evidence” against him. The evidence included a blood-soaked glove found on Simpson’s estate and a matching one found at the scene of the murder.

Questions about the lining of the gloves emerged during the 1995 trial, but they did not involve allegations of tampering by defense lawyers.

A civil jury in 1997 found Simpson liable for the deaths and ordered him to pay $33.5 million in damages to the murder victims’ families.