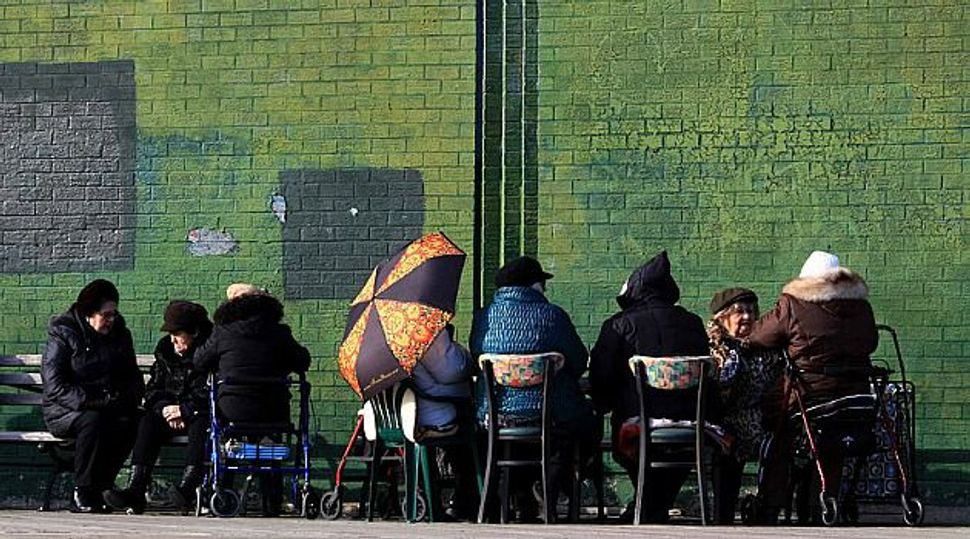 New Faces: Once known as a predominantly Jewish enclave, Brooklyn?s Brighton Beach is now home to a large number of Central Asians. The newcomers fit in well because they also speak Russian, a vestige of their shared Soviet past. Image by anna kordunsky

Covering the event was a video crew from Uz TV and radio Uzbegim, two new media outlets targeting local Central Asian audiences. The director of both, wearing a black-and-gold-striped vest at the party, was Ilkhom Kenjabaev 42, the Uz TV director who moved to the United States 12 years ago from Uzbekistan.

The crowd represents the changing face of Brighton Beach. Once known primarily as a Russian-Jewish enclave, the neighborhood over the past two decades has taken on a more diverse mien as a new wave of Russian-speaking immigrants has chosen to call the area home. These newcomers are drawn by the gravitational pull of the common Russian language, which is itself a legacy of the Soviet education system.

“In school, we were educated in two languages,” Kenjabaev said, referring to Uzbek and Russian. “Our second language was Russian. What I like most about Brighton Beach is that everybody speaks it.”

Many of the newest arrivals, like Kenjabaev, are from the “stans,” the former Soviet republics in Central Asia. Motivated to emigrate by the lack of economic opportunity and the civil clashes that erupted in the aftermath of the Soviet Union’s collapse, they found in Brighton Beach a community that, though different from what they left behind, still offered some sense of linguistic and cultural familiarity.

“In Soviet times, as you know, there was no separation among the peoples,” Kenjabaev said. “They were all Soviet citizens: the Ukrainians, the Belarusians, the Uzbeks, the Tajiks. Russian language was their connection. The reason they come here, to Brighton Beach, is that Russian still ties them together.”

It is their knowledge of Russian that allows these newcomers to quickly acquire a support network and to find work, even for those who speak no English. For Kenjabaev, the unifying pull of Russian is what keeps him financially afloat through his work as a wedding photographer, which is the main source of income for both himself and his fledgling TV station. Most of his clients are from the former Soviet republics. So are his suppliers, advertisers and film crew.

Yet while the Central Asians who are arriving today find a Russian-speaking community already in place, it was not always this way.

Brighton Beach acquired its current Russian character beginning in the 1970s, when the Soviet Union relaxed emigration policies for ethnically Jewish citizens. Spurred by the desire to escape ethnic discrimination, hundreds of thousands of Soviet Jews left in search of a better life, and many settled on Brooklyn’s southern oceanfront.

What they found, though, was a neighborhood that had fallen into deep decline. Although the beach remained a popular attraction, the adjoining streets in the 1950s and ’60s were replete with abandoned houses, and youth gangs sowed fear in the elderly population.

“There was nothing here when we came,” said Yana Veksler, 46, who arrived with her family in 1979 and still lives in the area, working for the Brighton Beach Neighborhood Association. “There were burned buildings, writing on the trains. These buildings were all empty, so we filled them.”

The influx of Soviet Jewish refugees arrested the neighborhood’s decline and turned Brighton Beach into the area with the largest population of Russian immigrants in the United States. Almost half (47%) of immigrants in Brighton Beach and Coney Island come from Russia and Ukraine, state figures show. The newcomers hailed from across the former USSR, bringing with them the accents, customs and food that have come to define the area. So many moved from Odessa, the Ukrainian city on the Black Sea, that “Little Odessa” stuck as the neighborhood’s sentimental label.

As the years have gone by, the demographics have changed. Many of the children of the first and second wave of immigrants chose to leave Brighton Beach for other locales, leaving behind their aging parents and grandparents. One need only stroll along the boardwalk to notice the disproportionate number of gray-haired babushkas and jowled older men lounging on its benches.

In 2009, the median age in the area was 48 years old, 14 years higher than greater Brooklyn’s median age, and senior citizens (those 65 and older) accounted for 25% of the population, according to a state demographic study.

The young people have not disappeared; many just happen to come from the Asian fringes of the old Soviet empire. These new immigrants have incorporated their own culture into the neighborhood. Lagman and manty, Central Asian-style soup and dumplings, have joined borscht and bliniy on local restaurant menus, and holidays like Nowruz are celebrated with flair. Uzbek entertainers are brought in to perform alongside celebrities from Russia and Ukraine. And among themselves, many young men and women from Central Asia converse in their own languages.

Despite the cultural divide between earlier immigrants and younger men and women from Central Asia, the gap is still narrower than what separates them from other residents of their new country, thanks to the common tongue. They interact freely and frequently with the neighborhood’s other Russian-speaking residents.

A large number have also found work caring for the area’s aging Russian-Jewish residents. More than 30% of the neighborhood’s working population is employed in the booming elderly health care and social assistance industry. Tatyana Lebedinskaya, a home health care trainer says that nearly 80% of her students are of Central Asian origin. For home care providers and elderly residents who speak little English, that fact that they can communicate in Russian is invaluable.

For Uz TV director Kenjabaev, adding Russian-language shows to his program offering helped to extend his daily airing time, a couple of hours at launch in 2009, to the current round-the-clock schedule. He credits his diverse audiences for the accomplishment, “not only Uzbeks, but also Russians, Ukrainians and all different audiences that support us.” Kenjabaev plans to stay in the neighborhood at least until his station achieves financial sustainability.

“Not only people from Odessa live on Brighton Beach anymore,” he said. “There are now Uzbeks, Kyrgyz, Kazakhs and Tajiks. They all come here, united by the Russian language. Brighton Beach — one could say it’s like a small Soviet Union.”