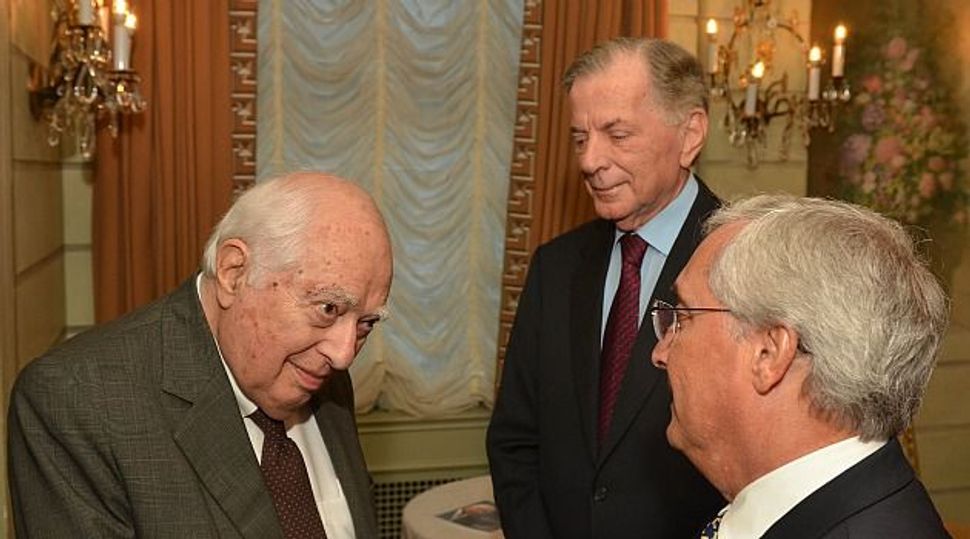 Neocon Bash: Bernard Lewis, considered an ideological godfather of the neoconservative movement, greets well-wishers at a gala in his honor. Image by josh nathan-kazis

At Bernard Lewis’s neocon gala, the talk was of war, peace, democracy and Muslims.

But in a room full of onetime advocates of the second Iraq War, no one much wanted to talk about a possible military strike on Iran.

Paul Wolfowitz, the Bush administration Pentagon official who pushed hard for an invasion of Iraq in 2003, chatted during cocktail hour with Judith Miller, the former New York Times reporter whose discredited reports on weapons of mass destruction in Iraq whipped up support for that invasion. At dinner, Henry Kissinger and billionaire conservative donor Bruce Kovner shared a table.

An Israeli consul general and the publisher of the New York Daily News were there, as was Itamar Rabinovich, the former Israeli ambassador and prominent academic. Israeli Prime Minister Benjamin Netanyahu sent a letter of congratulations.

The September 12 party was a celebration of the long and storied career of Lewis, the erudite 96-year-old Arab studies scholar and Princeton University professor now widely known for his close ties to the Bush White House. The venue was The Pierre, the kind of Fifth Avenue hotel where everyone wears suits, and where the limousines that drop you off at the party wait outside to take you home afterward.

Though the front-page news that week was about the possibility of an attack on Iran, the issue wasn’t much mentioned. In an interview with the Forward, Lewis himself said he opposed a military strike.

The old guard hawks were more interested in talking about the fallout of the Arab Spring, and in hypothesizing on the unfeasibility of rapid transitions to democracy in the Arab world.

“A dash towards Western-style elections, far from representing a solution of the region’s difficulties, constitutes a dangerous aggravation of the problem,” Kissinger read from the event’s podium, quoting Lewis, to a loud smattering of applause. “When Bernard writes about this, it is not an attack on democracy — it is a call for the creation of institutions and procedures by which democracy can be brought into a region…” he went on to assert.

Tickets to the event, which was also a fundraiser for the American Friends of Tel Aviv University, cost $550. The entrée was chicken. A dinnertime slideshow presentation neatly summarized the attitude of the evening: photos of Lewis as an elderly man with George W. Bush and Dick Cheney; photos of him as a young man with King Hussein of Jordan and Iran’s former shah, and a picture of him and Oprah Winfrey.

The British-born Jewish academic is thought by some to have provided key intellectual ammunition in the Bush administration’s push toward the 2003 invasion of Iraq by the United States. Lewis now says that he opposed the invasion at the time.

The toasts to Lewis were full of quotes from the eminently quotable professor. Daily News publisher Mort Zuckerman managed to pay tribute to himself while honoring Lewis with a five-minute speech comprised entirely of passages that Zuckerman had written and published over the past decade in which he had quoted Lewis.

Earlier in the evening, the mood was lighter. In a long hall with a full sushi spread and a couple of well-stocked bars, Israeli Consul General Ido Aharoni hugged his way through the crowd, trailed by a security detail. Wolfowitz and Kovner conferred in the center of the room. Miller, who now writes about theater for Tablet magazine, circulated nearby.

Lewis sat at a small table with a few younger men. A bit of something amber sat in a glass in front of him. Hunched but sharp, the old professor was kept company, but the guests seemed to be affording him a respectful distance.

Lewis’s disciple, Fouad Ajami, a Lebanese-born professor at Stanford, took on the reception duties usually performed by the honoree. Later, during his lengthy toast to Lewis, Ajami offered advice on how to address his distinguished mentor. “Don’t call him Bernie,” he said. “That is completely out.”

Whatever kept the crowd of hundreds at bay from Lewis didn’t deter Kovner, who strode directly to his table. Once called “George Soros’s right-wing twin” in a New York magazine headline, Kovner is also a major Jewish donor to Mitt Romney’s super PAC. The elegant woman on Kovner’s arm bent to kiss the old don.

Kissinger and Zuckerman gathered for a photo op with Lewis directly before the meal. Kissinger, now 89, hid his cane behind his back as a battery of photographers let loose on the group.

During the photo availability, two young journalists from what they said was an “independent” outlet asked Kissinger about a study he directed in the 1970s on Third World population growth. Kissinger told them to “go to hell,” the reporters later told the Forward.

Kissinger was only a bit more receptive to a question from the Forward later in the evening about a recent clash between Netanyahu and the Obama administration over the U.S. attitude toward a military strike on Iran.

“I think Israel and the United States should come to an agreement about the direction they’re going,” Kissinger said. “They don’t have to announce it, but they should have an agreement.” He then seemed to pause, but in fact was done speaking.

Wolfowitz, intercepted on his way to dinner, was similarly monosyllabic, saying that he “thinks” that there is “logic” to the notion of setting so-called red lines that would trigger a military strike if Iran were to cross them.

Lewis was far more forthcoming. “I don’t think it’s the right answer,” he said when asked about a military strike on Iran. “We should do what we can to help the Iranian opposition. We could do a lot to help them and we’re not doing a damn thing, as far as I know.

“Iran is a great nation with a long and glorious history,” Lewis said. “When we say things like, ‘Iran must not have nuclear weapons,’ imagine how an Iranian patriot would react to that. What we mean is the gang of genocidal maniacs who are now dishonoring the name of Iran must not have nuclear weapons. I think we should make it quite clear that our hostility is not against Iran but against, as I said, this gang who are dishonoring their name.”

Still, though a military strike on Iran wasn’t the right answer in his view, Lewis conceded: “It may come to that.”