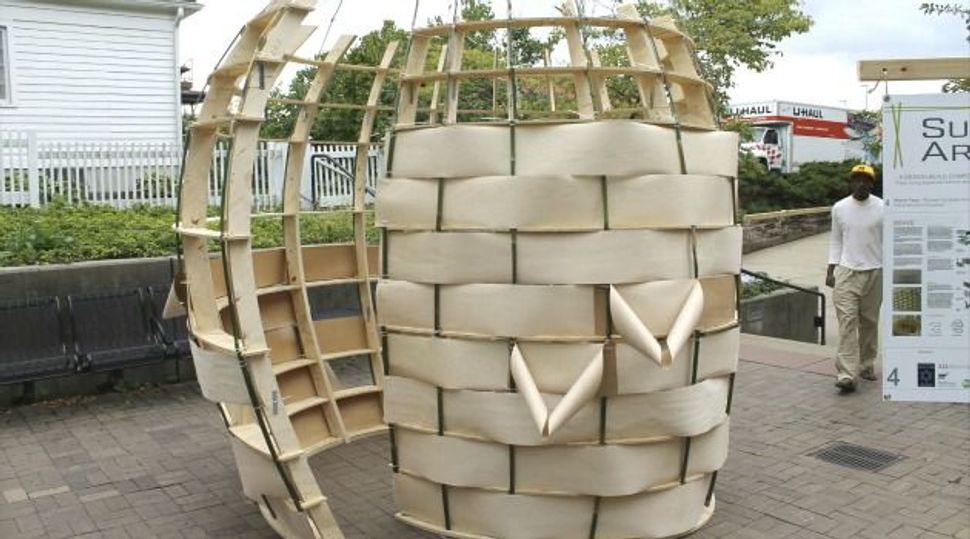 Sukkah-A-Rama: Off-beat designs for sukkahs are the order of the day in Ann Arbor, Mich., where environmentally conscious designers vied for the greenest sukkah honor. Image by paul vachon

Six highly untraditional sukkahs — imagine black ash, recycled wood, inflatable inner tubes and grass — took over Liberty Park in this city’s downtown section in late September, inaugurating a locally sponsored national competition for environmental sukkah design. The sprawling scene was the work of a project known as Sukkah Arbor. The project is one of the first recipients of the Jewish Federation of Greater Ann Arbor’s Community Impact Fund, which offers grants to groups and projects with the potential to enrich local Jewish life and involve the greater community.

Founded by local architects Josh Bloom and Gary Rochman, Sukkah Arbor used the funds to launch a competition to “re-envision the sukkah.” The goal is to celebrate the ancient tradition of Sukkot by bringing 21st-century design and construction techniques to the sukkah, the temporary outdoor structure, open on one side, in which Jews traditionally take their meals and even sleep under the stars during the eight-day festival. The project, which partnered with the Shelter Association of Washtenaw County, a local facility serving the homeless, also aimed to draw attention to the issues of homelessness and hunger.

David Shtulman, the federation’s executive director, praised Sukkah Arbor as an “innovative” way to “enhance Jewish life and to further educate all people in the Ann Arbor area.”

The competition, which was announced last spring, attracted national interest. Each entry had to follow specific rules on height, length, number of walls and square footage, all stated in the biblical units of measure, handbreadths and cubits. Manmade materials could be used for the walls, but each roof had to be made from a natural product of the earth to form a s’chach or covering. The roofs also had to provide more shade than sunshine during the day, and allow stars to be visible at night, as per rabbinical prescription. Six finalists were chosen from 38 entries submitted from around the country. A panel of six judges, comprising professional architects, academics, designers and rabbis, chose the winners. Entries were judged on sustainability, portability and reusability, beauty, inspiration and innovation.

It was the sukkahs of the six finalists that went up in Liberty Park on September 23. From among these, local residents attending the event voted via simple paper ballots and chose a sukkah entitled “Hay Bales,” by Harold Remlinger, Ralph Nunez and Shari Stein of Warren, Mich, as the winner. The sukkah, a construction made up of 69 straw bales and recycled wood, stressed the value of reusability, according to its creators, who will receive a $2,000 cash prize.

The other finalist entries on display were nothing if not avant-garde. They included “Slippery Sukkah” by Kelly Bair of Chicago’s Central Standard Office of Design — an unconventional structure made from seven stacks of inflatable inner tubes tied together and topped with molinia arundinacea, or tall Moor grass, a species with very long, arching blades, and “Coastal Harvest” by Gregory Marinic of the Houston architectural design firm Arquipelago, constructed from phragmites australis, a species of reeds invasive to Michigan, to draw attention to the ecological threat posed by this non-native plant.

At the end of the one-day exhibit in the park, all six sukkahs were dismantled and reassembled at the Jewish Community Center of Greater Ann Arbor, where, they will be displayed for the duration of the Sukkot holiday, which ends on October 7.

Harold Remlinger, one of the designers of the winning sukkah, said, “The competition gave me and my associates a chance to ‘give back.’ Our design reflects our deeply held values by taking a green and sustainable approach to the current needs of the community.”