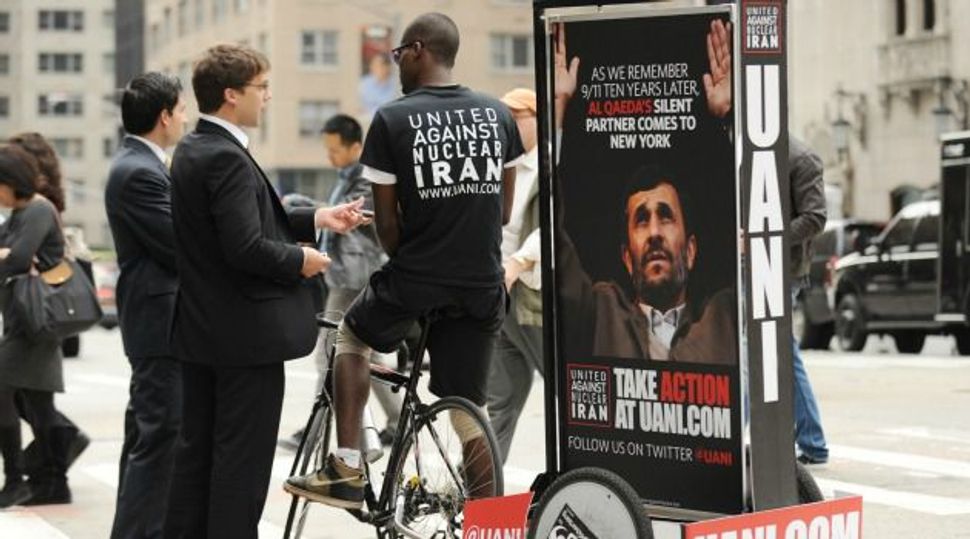 No to Iran: Activists take to streets of New York to call for stepped-up action to block Iran from obtaining a nuclear weapon. Image by getty images

A group of activists are leading a drive to ban Iranian companies involved in the country’s nuclear program from accessing the Internet — a move that would essentially cut them off from the global information network.

The activists, from a bipartisan group called United Against Nuclear Iran, have appealed to the international providers of Internet domains to deny sanctioned individuals and organizations the right to connect to the Web. Thus far, the companies have not been responsive.

But these attempts could prove superfluous, as Tehran itself has embarked on a move to shut off Internet access and revert to an internal Web that can be accessed only in Iran.

UANI has strong ties to the Jewish community and is supported by the Conference of Presidents of Major American Jewish Organizations. The anti-Iran group’s co-founders include Dennis Ross, the former presidential Middle East adviser who is now co-chair of a think tank in Jerusalem sponsored by the Jewish Agency for Israel.

In two separate letters, dated September 7, UANI demanded that the two major suppliers of Internet domain names in the United States and in Europe immediately stop providing services to Iranian entities subject to sanctions by the U.S. Departments of State and Treasury, or by the European Union. The appeals were addressed to the Netherlands-based Réseaux IP Européens Network Coordination Centre, known as RIPE NCC, and to Internet Corporation for Assigned Names and Numbers, known as ICANN/IANA and based in Los Angeles.

Mark Wallace, UANI’s CEO and a former United States ambassador to the United Nations, argued in the letters that the services provided by these companies “are misused by the sanction-designated Iranian entities and persons to facilitate their illicit operations, activities and communications, including support for Iran’s rogue nuclear weapons program, Iran’s sponsorship of terrorism around the world and the Iranian regime’s brutal crackdown against its own people.” Copies of the letters were sent to the State Department and the Treasury, the two government agencies in charge of sanctions against Iran. The letters also noted that Iran has used its power to block Internet access to others in order to prevent opposition rallies and to monitor the activities of dissidents.

The move would target dozens of Iranian entities that currently have an Internet presence through the country and use the suffix of .ir. These include not just companies owned and operated directly by the Iranian government, but also entities such as Iranian banks now under sanctions as part of an international effort to block Tehran’s access to international trade.

Other websites that would be affected by the move include the [Malek Ashtar University]( http://www.mut.ac.ir/), which has been identified in the West as a leading source for training and educating experts for Iran’s nuclear and missile programs, and Khatam al-Anbiya, a construction company sanctioned by the Treasury Department for serving as an engineering arm for the Iranian Revolutionary Guard Corps.

“We believe that if these entities lose their access to the Internet, it will be harder for them to do business,” said Nathan Carleton, UANI’s communications director. He pointed to the group’s successful campaign to force the international money transfer communication network Swift to stop doing business with Iran as the model for the current effort aimed at Internet domain providers. Swift’s willingness to stop serving Iranian financial institutions was cited by experts as one of the reasons for the collapse of the Iranian currency and for the difficulties Iran’s economy is now facing.

Some critics fear that limiting Iran’s Internet access, if done in broad brush strokes, could infringe on the Iranian people’s Internet freedom. UANI has made clear it is not seeking to prevent Iranians from reaching out to the world through the Web. “We fully support Internet freedoms and access to all parties,” Wallace wrote in his letter. The group stressed that it was seeking to enforce the law that prevents companies in the United States and the EU from doing business with Iranian entities that are on the sanctions lists, and that it does not intend to go after any other Internet users in Iran.

But even this modest goal has yet to bare fruit.

RIPE NCC issued a statement saying that the group did not believe it was violating any law by providing domain registration for the Iranian entities and that it promised to further examine the issue. ICANN has yet to respond.

UANI, Carleton said, is prepared to reach out to members of these companies’ governing boards, if needed, and even to take legal action. The group believes that public pressure can play an important role in convincing businesses to comply with Iran sanction laws.

But blocking Iranian-sanctioned entities from the Web could come at a cost to Western intelligence efforts.

“Hidden from the public are the efforts that Western intelligence agencies are making to keep abreast of everything the Iranians are doing, especially in the nuclear field,” said Dan Raviv, co-author of “Spies Against Armageddon: Inside Israel’s Secret Wars,” a recent book that looks into clandestine operations led by Israel’s Mossad. Raviv, a veteran CBS news correspondent, said that a lot of spying and infiltration activity is done from afar, including some of the successful efforts to sabotage Iran’s nuclear program by inserting computer viruses. “Keeping Iran on the World Wide Web would, on balance, be useful to the CIA, the Mossad and other spies trying to slow down the Iranian program,” Raviv said.

In fact, the regime in Tehran, aware of these considerations, has embarked on its own move to disconnect the Islamic Republic from the World Wide Web. On September 22, the Iranian government announced its intention to create an intranet service that would bypass the global Internet and isolate Iran from Internet spying and also from access to content coming from outside the country. As a first step, the government said it would cut off access to Google and to Gmail, and that government agencies will be put on the internal national net within days. Iranian citizens are to be connected to the intranet in the second phase of the program.

Iran already has tough limits on Internet access and has been filtering content for years. A recent report by an international commission on Internet availability found that only 21% of Iranians have any kind of access to the Internet.