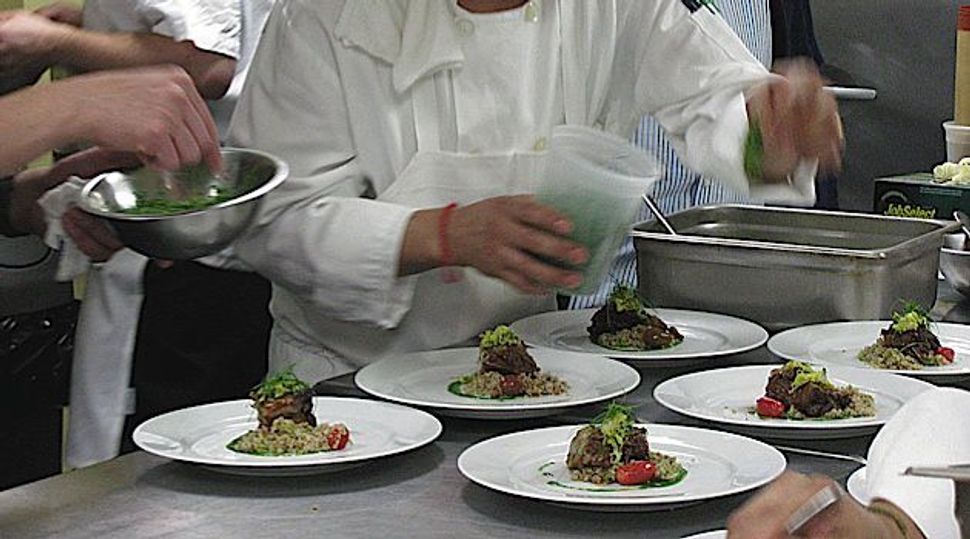 It’s a Friday night in Lower Manhattan, on the first Shabbath that truly feels like fall. 38 Prince Street looks as if it must have been a townhouse in a previous life. Now, with scant light shining through the foggy windows, and a locked, unmarked door, it looks almost haunted. I wonder if I have the right address.

Soon the door opens, and the group of a dozen or so people that have congregated outside on this dark street is invited into City Grit, vintage shop by day and pop-up restaurant space by night. We are seated at long, dark wooden tables surrounded by the detritus of the store: old medical posters, worn wooden boxes and mason jars full of wild flowers, all given a warm hue by candles and soft low-wattage light bulbs.

Over the next half-hour, 60 people trickle in. The Shabbath dinner is off to a late start, but no one seems to mind as we greet our dining companions, some of whom have traveled from as far as Canada and California to fress on nine courses of Jewish fare prepared by chefs from some of the country’s foremost Jewish restaurants: Mile End Deli, Russ and Daughters and Kutsher’s Tribeca, in New York; Kenny and Zuke’s, in Portland, Ore.; Saul’s in Berkeley, Calif.; and Wise Sons in San Francisco.

The first dinner of its kind, which is part of the New York City Wine and Food Festival, kicks off a weekend of events centered on Jewish food, organized by Noah Bernamoff, owner of nouveau deli Mile End.

The driving force behind the meal, Bernamoff told me a few days before the dinner, is to answer the question, “Is there some direction and future for Jewish food that’s not just nostalgia?” He and the other chefs respond through culinary discourse in the form of a series of sophisticated plates that challenge diners to reconcile their conceptions of Jewish fare with what appears before them. “[The] flavors represent a broader scope of ideas,” he added.

That evening, the room is hushed as Bernamoff marches in wearing a long black apron, grinning and carrying a beautifully braided challah. His excitement is palpable.

“This [evening] isn’t a religious ceremony but a cultural one; it’s the reason we all do this every day; it’s about the entire movement of new Jewish food,” he says as he introduces the other chefs. 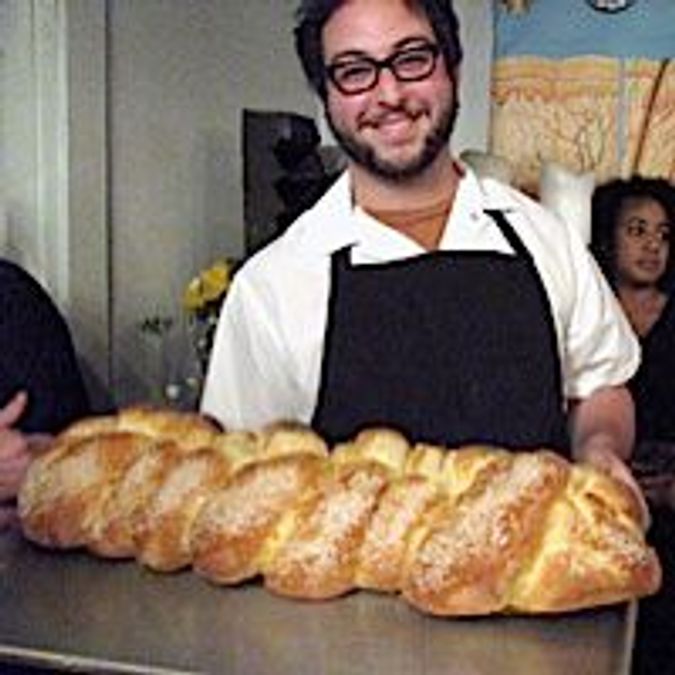 After a quick Hamotzi and Kiddush, a steady stream of dishes and wine seemed to march into the dining room for the next three hours, creating a Shabbath dinner like no other. To begin, small individual baking sheets of appetizers by Russ and Daughters appear before us, featuring a delicate but flavorful roll of buckwheat blini, stuffed with a lightly smoked trout mousse topped with an exquisite pile of orange-orbed French trout roe.

Next, a reinterpretation of gefilte fish in a course dubbed “Gefilte Fish for the Ages,” for which a small sardine has been stuffed with herbed gefilte fish and served warm with a delicate pickled beet. “This is a gefilte fish my grandmother would’ve sent back,” jokes the James Beard Foundation’s vice president, Mitchell Davis, who is sitting across from me. After tasting it, he adds that gefilte fish, in its original form, was ground fish stuffed into a fish skin, different — but not entirely so — from what we are eating. The plate captures one of the evening’s themes: Despite the haute presentation, many of the dishes are an homage to recipes that date back generations.

A deli board of five different bite-sized dishes prepared by Wise Sons arrives, including a selection of nearly forgotten classics like p’tcha, a pickled calf’s hoof reinterpreted as a colorful tri-layered terrine; an incredibly rich and earthy helzel, which is chicken gizzard, heart and liver stuffed into fried chicken neck, and kishke, served as a schmaltz and matzo meal dumpling topped with a spicy green onion. The plate’s creative presentation thrusts the food into the center of conversation as everyone tries to match up hints of Old World flavors with modern ingredients and presentation.

Midmeal, I sneak down to the kitchen, where chefs from various restaurants are working together around a large metal table on one side of the kitchen, assembling bowls of deep mahogany beef broth with light but rich bone marrow infused matzo balls and fall greens. 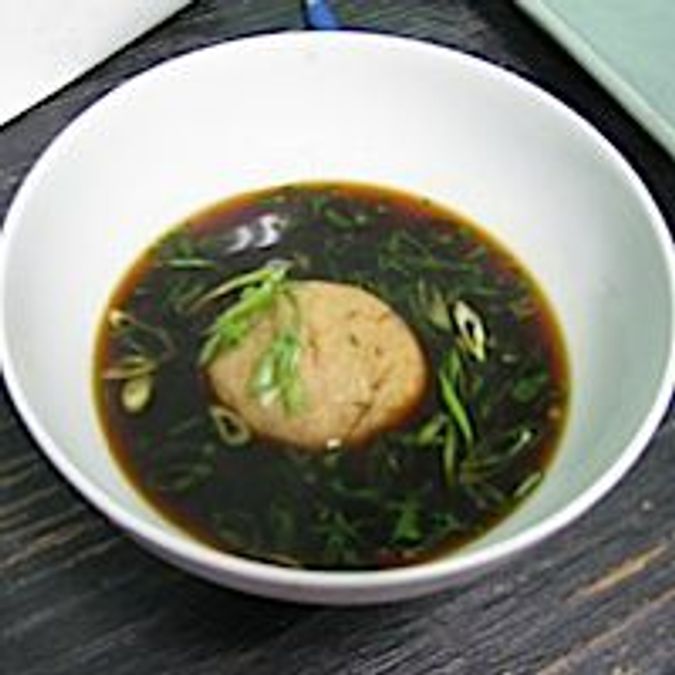 The chefs who aren’t needed congregate on the opposite side of the kitchen, drinking whiskey from disposable Tupperware containers, chatting and snacking on gribenes, or fried chicken skin, that the team from Wise Sons carried in their backpacks on the plane ride from San Francisco for the helzel.

Upstairs in the dining room, diners float between tables, saying hello to friends and discussing the meal. As the poultry and meat courses approach, I yearn to be less full than I already am. Ken Gordon of Kenny & Zuke’s prepared a duck confit in Portland, which he shipped to New York and stuffed into cabbage rolls at Mile End’s commissary. The result, which is topped with duck cracklings and red pepper sauce, is like many of the evening’s dishes — simultaneously familiar and foreign. 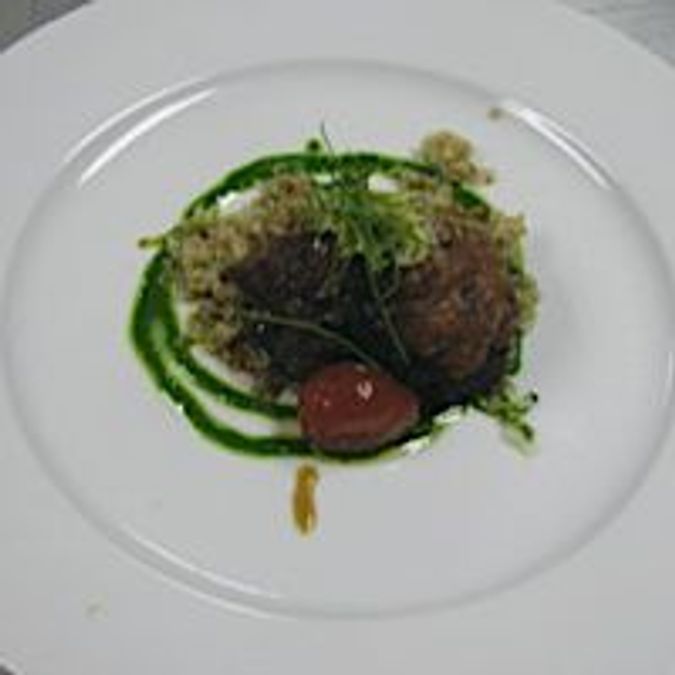 The final savory course, by Kutsher’s Tribeca, is a superbly supple and flavorful lamb neck braised like brisket in a rice wine vinegar and served over a bed of kasha. The meat falls apart in my mouth, leaving a rich and slightly sweet finish, which is carried through to dessert. Bernamoff ends the meal with a deconstructed babka: pulled pieces of his stupendous challah on top of a lightly smoked streusel and topped with a citrus drizzle in a bowl whose sides are brushed with a thick chocolate mousse.

While not every dish throughout the evening sang — the p’tcha lacked flavor, the beautiful salad of bitter lettuces needed texture, a matzo ball packed too much salt and an amuse bouche of parsnip flan felt out of place — the chefs provided a resounding answer to Bernamoff’s question.

The next day, as I nibbled on a small bag of assorted traditional cookies handed out at the end of the night, I worried that the meal was an inimitable experience. Still, the conversations it had already started to provoke among chefs and Jewish food enthusiasts left me hopeful that they would carry on rippling out, taking the cuisine beyond the realm of nostalgia.