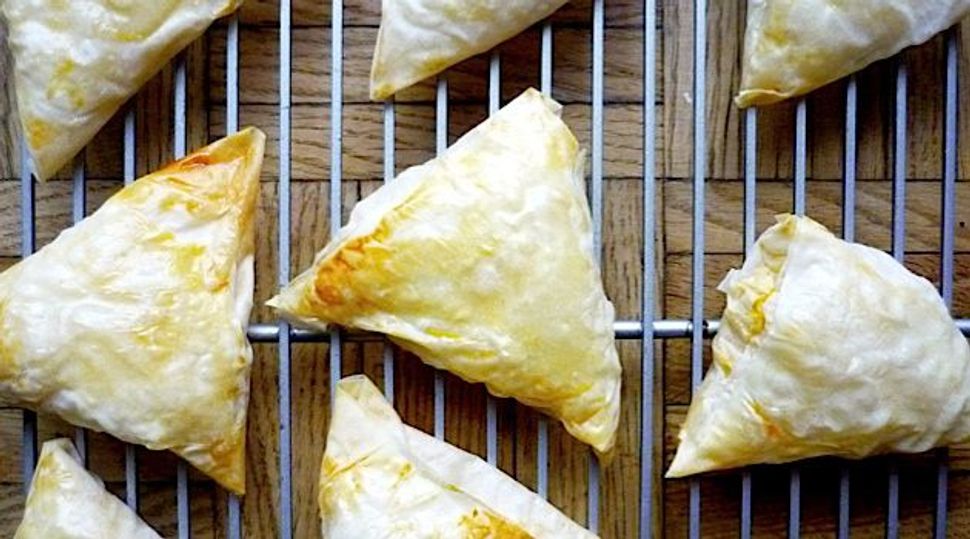 Tasty Pockets: These pumpkin-and-feta stuffed phyllo pockets are based on a recipe for filikas de balabak, a dish traditionally enjoyed by Turkish Jews. Image by Leah Koenig

In America, late October through November might as well be renamed “pumpkin season.” Across the country, people stock up on cans of pumpkin puree to stir into pies, pancakes and quick breads. They head to U-Pick pumpkin patches, as if on a pilgrimage, to pluck the plump orange gourds (which are native to this continent) directly from the vine and haul them home. And they queue up at Starbucks to order pumpkin spice lattes, a drink whose seasonal arrival the cafe chain has successfully marketed as “the beginning of fall.”

But on the Jewish calendar, pumpkin season begins earlier and extends longer. America’s most pumpkin-centric holidays — Halloween (with its roasted, salted pumpkin seeds, the byproduct of jack-o’-lantern carving) and Thanksgiving (with its pumpkin pies crowned with whipped cream) — have culinary mirrors in Jewish holidays, starting with Rosh Hashanah and stretching all the way through Hanukkah, particularly within Sephardi and other non-Ashkenazi Jewish cuisines.

“My mom made pumpkin bichak for the holidays” Queens resident Dalia Avezbadalov recalled, referring to the pumpkin-filled, yeast-dough dumplings popular in Bukharian-Jewish cuisine. In Morocco, potakhe de potiron, or split pea and pumpkin soup flavored with cinnamon and saffron, was a common Rosh Hashanah dish. And according to Claudia Roden’s “The Book of Jewish Food: An Odyssey From Samarkand to New York,” pumpkin jam is widespread throughout Sephardi communities on Rosh Hashanah. “Its ritual significance on the New Year has to do with its golden color, which represents happiness and abundance for the year ahead,” she writes.

Outside of the holidays themselves, roasted seeds called bizr (which can refer to pumpkin, sunflower or watermelon seeds) are a common autumn snack within Syrian Jewish communities. “A table festooned with empty shells is usually evidence of a well-attended party or sebbit (Shabbat lunch),” Poopa Dweck writes in “Aromas of Aleppo: The Legendary Cuisine of Syrian Jews.”

So how did this New World gourd, so beloved and revered in its native land, find its way into so many dishes in far-flung Jewish communities? Along with potatoes, tomatoes and other produce, pumpkins migrated to Europe with the 15th- and 16th-century explorers. According to “A History of Food” by Maguelonne Toussaint-Samat, the first record of pumpkins being grown in Europe appeared in 1550. From there, pumpkins slowly became incorporated into trade routes. “The Jews were actively involved in commerce, so they were among the first to try the vegetables from the New World,” Joyce Goldstein writes in “Saffron Shores: Jewish Cooking of the Southern Mediterranean.”

As with other ingredients, like eggplants and artichokes, Jews were typically also more accepting than their neighbors of these new and unfamiliar foods — in part out of financial necessity. In Italy, Roden writes, pumpkin “was once reviled [by most people] as a poor food… but the Jews always liked it.” The pumpkin’s large size and ample flesh meant that a single gourd could feed several people. And its dense, meaty texture added important bulk to dishes. As Goldstein writes in “Cucina Ebraica: Flavors of the Italian Jewish Kitchen,” when cooked [pumpkin] has so much body that [Italian Jews] likened it to liver.” The Jews’ early adoption of pumpkin, and the delicious dishes they created with it, helped to ease it into wider use. When the Jews were expelled from Spain during the Inquisition, they brought their pumpkin recipes with them to their new homes, helping to spread the gourd even further.

Today, some Sephardic and Middle Eastern restaurants continue to offer pumpkin dishes. In Queens, for example, the Tandoori Bukharian Bakery and Grill includes pumpkin chebureki, fried dough pockets filled with pumpkin puree, on its menu. And in Jerusalem, the upscale Moroccan restaurant Darna serves couscous Marrakech, which comes studded with chunks of pumpkin and other vegetables. But pumpkin, which, perhaps more than any other autumn fruit, has come to symbolize home and hearth, tastes best when made in one’s own kitchen. So take advantage of this country’s annual obsession with pumpkin to explore the tastes — like the Turkish pumpkin feta triangles here — of Jewish communities worldwide.

Leah Koenig writes a monthly column on food and culinary trends. Contact her at ingredients@forward.com

These pumpkin-and-feta stuffed phyllo pockets are based on a recipe for filikas de balabak, a dish traditionally enjoyed by Turkish Jews.

1) Heat the olive oil in a medium-size pan set over a medium flame. Add onion and cook, stirring occasionally, until lightly browned, 5–7 minutes. Remove from heat, and let cool slightly.

2) Meanwhile, stir together the pumpkin, ricotta, 1 egg and feta until combined. Fold in the cooked onions, then stir in the pepper flakes, salt and black pepper.

3) Grease the bottom of 2 baking sheets with butter or cooking spray.

4) Place the thawed phyllo dough sheets on a flat surface, and cover them with a damp dishtowel to keep them from drying out when not in use.

5) Carefully remove one sheet of dough, and place it on a flat surface. Cut it lengthwise into 4 long strips. Working quickly, brush the dough strips with melted butter. Fold over one side of the strip lengthwise to meet the other (like closing a book), and brush again, with more butter.

6) Spoon 1 rounded teaspoon of filling at the bottom end of each buttered strip. Fold the bottom right corner of the strip upward toward the left edge to make a triangle. Then fold over the triangle to the opposite side. Continue folding upward in this manner until you are left with a triangle with the filling tucked inside.

7) Place the filled triangle on the prepared baking sheet. Repeat with additional pieces of phyllo until all the filling is used up. Just before baking, lightly beat the second egg in a small bowl, and brush it on top of the filled triangles.