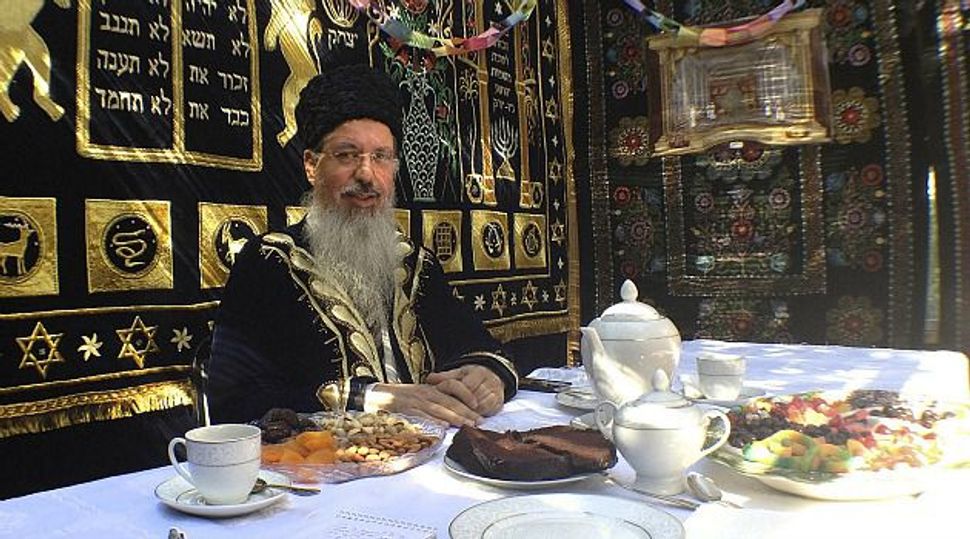 Sukkah Star: Itzhak Yehoshua refuses to step down as Bukharian chief rabbi, despite being accused of a dizzying string of misdeeds. Image by paul berger

For 25 years, Itzhak Yehoshua has been the spiritual face of Bukharian Jewry, fêted by politicians and foreign dignitaries as the Bukharian chief rabbi.

Yehoshua continues to receive greetings and awards from elected officials. But among Bukharians today, in their diaspora capital of Queens in New York City, he is better known as an embarrassment — a great man felled by allegations of lax conversion and kashrut standards, bribery and forgery, and of making false claims in the name of Shlomo Amar, the Sephardic chief rabbi of Israel.

Last April, the community’s Bet Efraim Central Synagogue informed Yehoshua his contract would not be renewed and he was subsequently ousted from the Bukharian Jewish Congress.

A ruling by five Ashkenazi rabbis of the Queens Beit Din, or rabbinical court, a few months earlier found that Yehoshua had violated laws related to conversions. This July, the same beit din issued a second ruling, distributed among the Bukharian community in a 12-page booklet printed in English and in Russian, cataloging the “tremendous lies and fabrications” Yehoshua is alleged to have committed in what the rabbis portrayed as an elaborate and “cunning” attempt to clear his name.

The second ruling, which took up six pages in the July 27 edition of The Bukharian Times, a community newspaper, included allegations that Yehoshua’s accomplices forged a letter from leading Bukharian rabbis to discredit the Queens Beit Din. The beit din also said that Yehoshua falsely claimed the support of Amar, and to prove it, the beit din printed an excerpt of a letter from Amar, calling Yehoshua’s actions “extremely unfortunate.”

The beit din rabbis concluded by warning that if Yehoshua does not cease practicing as a rabbi in Queens, it will “pronounce an official cherem,” excommunicating him from the very community that he helped build.

One recent Friday morning during Sukkot, Yehoshua seemed unruffled by the tumult of the past two years, calmly answering calls on his iPhone from followers with domestic and spiritual quandaries while guiding his Lexus past the well-manicured lawns of Forest Hills.

Yehoshua parked outside his home and stepped out of his car, dressed in a royal blue kaftan, or joma, thickly embroidered in gold, and a black lambs wool hat, or telpak. He strode across the road and retreated to the sun-dappled quiet of a richly decorated sukkah draped in Central Asian rugs depicting Sephardic chief rabbis and scenes from the First Temple in Jerusalem.

Yehoshua, who still claims the mantle of Bukharian chief rabbi, shrugged off the recent tumult as the result of a flourishing community that, as it grows larger and stronger, inevitably bubbles with friction and power struggles.

“I don’t think we are any different than any [other] Jewish community,” Yehoshua said.

When Yehoshua arrived in Queens from Israel in 1987, at the age of 26, the majority of Bukharians still resided in Central Asia, where they had lived for at least 1,000 years, in cities such as Samarkand, Bukhara and Tashkent, all then part of the Soviet Union.

According to their own account, the Bukharian Jews’ arrival in the region goes back much further. Their earliest presence is said to date to the destruction of the First Temple in Jerusalem in the 6th Century BCE. Over time, the Bukharians traveled east, settling in major trading hubs along the Silk Road, and developing their own richly distinctive culture. For much of their history they remained connected to other Persian-speaking Jews of the region, such as the Jews of Iran, Iraq and Afghanistan.

Following the collapse of communism in the 1990s, almost the entire community emigrated. Most went to Israel, but thousands streamed into North America. Queens became their new center here, but smaller communities also developed in cities such as Phoenix, Ariz., and Toronto.

Yehoshua estimates that the Bukharian population of North American boomed from about 700 families before 1991, to about 12,500 families today, most of them coming through Queens. “We used to call our family center [in Queens] the Bukharian Ellis Island,” Yehoshua said.

At the beginning of the 1990s, Yehoshua, the Israel-born son of Bukharian immigrants, was one of the few rabbis in America who could speak Bukhori, an amalgam of Farsi, Russian and Hebrew, and relate to Bukharian culture and tradition.

They may not have reached the stringent standards Orthodox Jews in America require, Yehoshua said, but they had “sincerity” and a “certain fear of God.”

“These were the seeds of a future political power struggle which we are facing today,” he said.

Yehoshua blamed three groups for his recent travails: a younger generation of Bukharian rabbis who reject the notion of a chief rabbi; another rabbinic group, educated at American yeshivas, who want the Bukharian rabbinate to move in a more strict, Ashkenazi-style Orthodox direction, and a power struggle at the Bukharian Jewish Community Center, a new building that almost went bankrupt in 2006 before it was bailed out by billionaire diamond dealer Lev Leviev and Queens real estate developer Simcha Alishaev.

Several Bukharian rabbis declined to comment on Yehoshua’s removal. One insider described the episode as a “black eye” for the community.

Even those who believe the allegations against Yehoshua say — with a sigh — that he is a talented rabbi who, by guiding its initial establishment and growth, achieved great things for the community. One person said he “cried tears” over Yehoshua’s downfall.

“He’s a very great guy,” said Yehoshua supporter Arthur Shakarov, managing partner of King David, a kosher Bukharian restaurant. “I don’t know why people are telling about him so much bad stories.”

Rumors in the community circulate that Yehoshua accepted money for easy conversions. But people are vague on details.

When asked about the beit din rulings, Yehoshua would say only that he was accused of allowing a ritual slaughterer to continue practicing after he ought to have retired.

Rabbi Peretz Steinberg, one of the five rabbis from the Queens Beit Din that ruled in the matter, initially declined to give any details. Later, he said that Yehoshua performed a number of conversions that “were not proper.”

There were “other things, as well,” Steinberg added, but “we didn’t get involved in the thievery and the dishonesty.”

Instead, he went to Israel, where he persuaded former Sephardic chief rabbi Eliyahu Bakshi-Doron to investigate the Queens Beit Din ruling. In a ruling, posted on Yehoshua’s website in January Bakshi-Doron declared the Queens beit din judgment “completely illegal.”

Yehoshua “is a respectful and peaceful man and not the bloodthirsty savage whom he was wrongfully claimed to be,” Bakshi-Doron wrote.

The Bukharian community will mark its 40th anniversary in the United States with a day-long conference in Forest Hills on October 21.

That, after four decades in America, a Sephardic community had to turn to an Ashkenazi beit din to resolve its dispute could be a sign that the Bukharian community is still not self-sufficient, said Alanna Cooper, a cultural anthropologist at Boston University.

Cooper, whose book, “Bukharan Jews and the Dynamics of Global Judaism,” will be published later this year, said the community also appears to have failed to cultivate a strong and cohesive leadership comprised of both rabbis and community leaders.

“I get the sense that although there were factions within the community and not everyone was behind the chief rabbi… there was a semblance that they were a united community,” Cooper said. “That’s now been totally fractured and de-centered.”

Cynthia Zalisky, executive director of Queens Jewish Community Council, has noticed something similar. With Yehoshua as chief rabbi the community was “under one banner,” she said, “and now there’s not one rabbi who has come and taken his place in that leadership role.”

Despite the Queens Beit Din’s demand that he leave, Yehoshua is adamant that he is still the community’s chief rabbi.

His son Michael Yehoshua has launched a new, English-language Bukharian newspaper, The Tribune, full of positive stories about his father.

In September, Bakshi-Doron cut the ceremonial ribbon on Yehoshua’s latest venture: a new $2 million synagogue and community center to be based out of a palatial Forest Hills home financed by Yehoshua’s supporters.

Yehoshua said on October 5 that the new center would open for services by Hanukkah. On October 11 he was more vague, saying the building had not yet been purchased and that a second property could become his new headquarters.

For now, he said, he is leading services out of the first floor of his home.