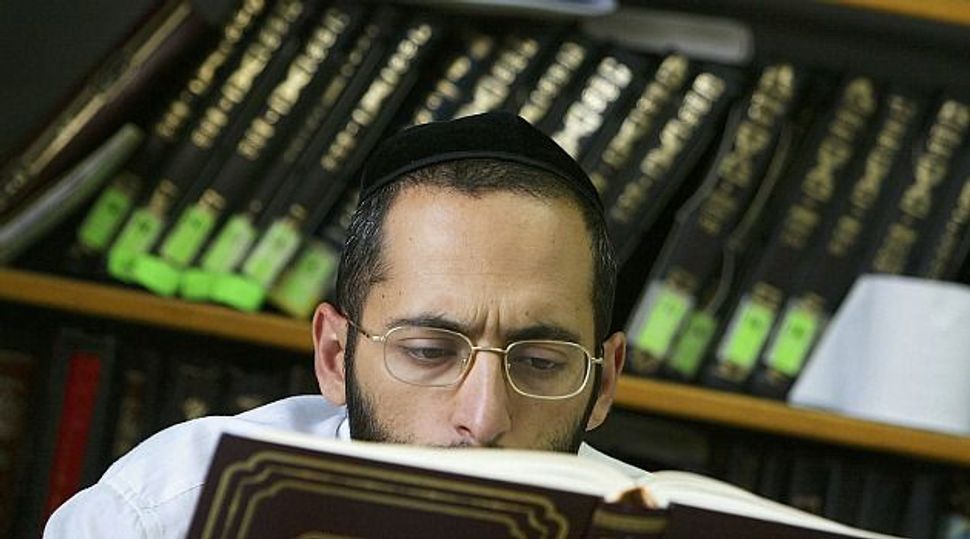 Each year, tens of millions of dollars in federal Pell grants go to yeshivas, many of which focus primarily on Talmud study, a Forward review of U.S. Department of Education data reveals.

The Jewish colleges take their place among many other religion-oriented schools that receive Pell grant funds. But they punch far above their weight, according to the department’s statistics. Sixty-three of the 152 religious institutions that receive Pell grants are Jewish, the data shows. And these Jewish schools collectively received 53% of the $84.5 million in Pell grant money that went to religious schools in 2010, the most recent year for which final figures are available. Of the top 10 Pell grant recipients in dollar terms that year, six were yeshivas.

Jewish institutions were even more dominant when considered in terms of the percentage of students in each school receiving Pell grant aid; nine of the top 10 colleges in America, according to this criterion, are Jewish.

Pell grants, the government’s largest tuition aid program for low-income students, totaled $35 billion in 2011, making the sum going to religious schools a virtual drop in the bucket. About 9.5 million students received a Pell grant that year, with $5,550 being the maximum available for students to apply to their tuitions, depending on need.

Despite the program’s focus on aiding low-income students and the hope that it will improve their career prospects, there appears to be little oversight of yeshiva degree programs and few questions about whether the yeshivas are helping to haul low-income Jewish students out of dire economic straits. A recent study by UJA-Federation of New York found that Orthodox families were a rising demographic in the New York Jewish community, the nation’s largest, but suffered significantly higher poverty rates than non-Orthodox Jews.

Mark Schneider, a visiting scholar in education policy at the American Enterprise Institute, said that if graduates of black colleges appeared to be trapped in the same cycle of poverty, “people would tear their hair out.”

Schneider, a former U.S. Commissioner of Education Statistics at the Department of Education, added that for this reason, it is important to find out the income and job placement figures to see how students are benefiting.

In fact, such figures are hard to come by. Jewish schools and the Jewish accrediting agency that certifies their eligibility for Pell grants declined to speak to the Forward. And the Department of Education said it did not have any of the data on job placement, graduation rates and other important measurements that these schools produce for the accrediting agency as part of their self-evaluation process.

For its review, the Forward used data from the Education Department’s National Center for Education Statistics. Religiously affiliated schools were selected via a classification system developed by the Carnegie Commission on Higher Education for “theological seminaries, bible colleges and other faith-related institutions.” The definition excludes schools such as Brandeis, Notre Dame, Georgetown and Yeshiva University, which are religiously sponsored but offer a mostly secular curriculum.

In 2010, according to figures from the NCES’s Integrated Postsecondary Education Data System, 76% of undergraduate students at Beth Medrash Govoha, in Lakewood, N.J. — 2,000 students — were on Pell grant aid. That same year, the average percentage of undergraduates at the country’s 152 religiously affiliated schools who received Pell grants was 47%; however, at eight yeshivas and Jewish seminaries, between 91% and 100% of students qualified for Pell grants.

When Rabbi Aharon Kotler opened BMG in 1943, he did so with the goal of realizing his dream of Torah lishmo — study for the sake of study — rather than study for the sake of a career, according to Ali Botein-Furrevig, an Ocean County College professor who has written a book about the Lakewood Jewish community.

There are no legal requirements that Pell-funded study should lead to work: The Department of Education says the Pell program was founded simply “to promote access to postsecondary education.” Still, some advocates say Pell ought to be a stepping-stone for low-income students to better jobs and opportunity.

“It’s not just about creating the access to higher education,” said Heather Valentine, vice president of public policy at the Council for Opportunity in Education, which represents first-generation and low-income students.“It’s about making sure that students are… graduating and getting placed in jobs.”

It is hard to know what Senator Claiborne Pell of Rhode Island and the other lawmakers who sponsored the Basic Educational Opportunity Grant program 40 years ago — a program that became known as the Federal Pell Grant program — would make of federal funding going to support degrees in talmudic studies at Jewish religious institutions or Bible studies at Christian theological schools. But proponents of yeshiva education point out that critical thinking and argumentative skills that develop while poring over Talmud — not to mention grueling day-long study sessions broken only for prayer and meals — serve students well for careers in many professions, particularly business and law.

In her book, “Heart of the Stranger: A Portrait of Lakewood’s Orthodox Community,” Botein-Furrevig said the current CEO of BMG, Kotler’s grandson Aaron Kotler, told her that BMG has “a successful job placement service” for graduates and that many students go on to careers in “business, the rabbinate, academia, medicine, finance, law or technology.”

The refusal of BMG and its accrediting agency, the Association of Advanced Rabbinical and Talmudic Schools, to speak with the Forward makes it impossible to evaluate this claim.

A spokesman for the Department of Education said that the Forward would have to submit a formal request under the Freedom of Information Act in order to see any copies of self-evaluation reports that the yeshivas submit to AARTS, the accrediting agency. But the spokesman added that a brief review of documents in the department’s electronic system did not reveal any self-studies submitted by AARTS.

The issue of waste, fraud and abuse in the Pell grant program has come to the fore in recent years, in particular when it comes to huge for-profit schools that swallow billions of dollars in Pell grants each year. These schools were criticized in a recent Senate inquiry that highlighted their poor retention and graduation rates.

Making the most of Pell grants is particularly relevant at the moment. The program has grown dramatically under the Obama administration, to $35.7 billion this year from $18.3 billion in 2008. President Obama and Gov. Mitt Romney, have vowed to maintain levels of Pell spending. Yet neither has explained how he will plug a looming $7 billion shortfall in the Pell program in 2014.

Stephen Burd, a senior policy analyst with the New America Foundation’s education policy program, said the Obama administration has tried to curb abuse by introducing regulations that assess whether colleges provide “gainful employment” to their students. But these regulations, which were struck down by a federal judge last summer, apply only to for-profit colleges. Even if they were re-enacted, they would not apply to religious, not-for-profit schools.

The Forward called the top five Jewish institutions, which received a total of $27 million in Pell grants in 2010, to ask about their graduation and job placement figures.

Representatives of United Talmudical Seminary and Uta Mesivta of Kiryas Joel did not return calls for comment. Representatives of BMG and of Yeshivath Viznitz declined to speak to the Forward because, they said, the news organization has a bias against the ultra-Orthodox.

Rabbi Moshe Gluckowsky, financial aid director at Central Yeshiva Tomchei Tmimim Lubavitz, said he could see nothing “constructive” in discussing the school. “Whatever you see in the surveys is what you see,” Gluckowsky said.

But federal data collection can appear haphazard. Although the NCES shows retention and graduation data for the Lubavitz yeshiva, it does not have similar data for BMG.

Besides, focusing on such data may be missing the point.

“There are a lot of numeric proxies, such as graduation rates [and] retention rates” said Mark Kantrowitz, an author of three books on student financial aid. “But nothing… really cuts to the heart of the issue, which is that some of these institutions are taking federal student aid funding for religious instruction instead of secular instruction.”

Kantrowitz, who publishes websites focused on planning and paying for college, Fastweb and FinAid, said that Pell-funded credit cannot be given for religious instruction. But yeshivas find wiggle room in the space between Jewish philosophy and Jewish prayer. “Talmud is in a gray area because it’s like studying the law,” Kantrowitz said. Similarly, Hebrew may be used for religious purposes, but it is also a living language.

To qualify for federal funding, schools must be accredited by an organization recognized by the Department of Education. The Jewish institutions named in this article are a handful of the 82 schools accredited by AARTS.

A copy of AARTS’s accreditation manual, however, submitted in 2007 as part of its petition for renewal of its recognition by the Education Department, reflects some of the idiosyncrasies of the yeshiva system.

The manual, a 90-page-long series of questions, is designed to help yeshivas produce a self-study document as part of their accreditation procedure. Along with standard questions about organizational structure, budgets and alumni, AARTS asks questions that would not normally be directed at more conventional institutions, such as:

“Is your Bais Medrash large enough to serve your student body?”

“Some people feel that an excessive use of a library results in a superficial knowledge of the textual material rather than in an in-depth understanding. Do you agree?”

“Do you seek to have a student body homogeneous in its attitudes and backgrounds, or do you look for diversity?”

Above all, the manual underlines the difficulty of evaluating such religious institutions according to secular standards. “There is no state licensing test which can be used to validate success, and our faculties have been challenged to describe what it is [yeshivas] do in a way that we, the accrediting body, can present to the outside world,” Fryshman writes in his introduction to the manual.