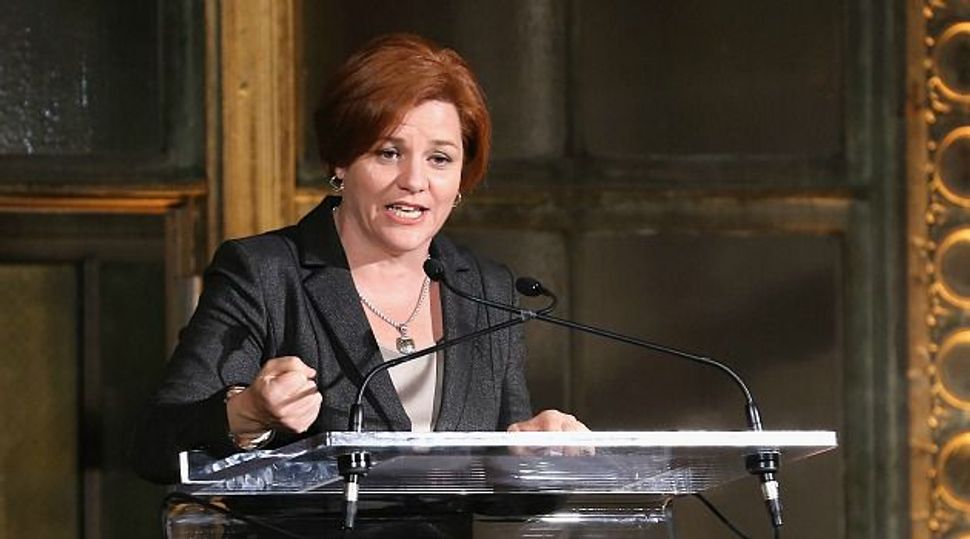 Mayoral Wannabe: In what could be early jockeying for the 2013 New York mayoral race, liberal rabbis are pushing Christine Quinn to back a bill that would force most businesses to provide paid sick leave to employees. Image by getty images

Members of the City Council overwhelmingly support the bill, as do a handful of other potential mayoral candidates. Quinn, however, the speaker of the City Council, opposes the legislation, and has so far blocked it from coming to a vote.

The Democratic mayoral primary is nine months away, and the city’s well-heeled liberal Jewish constituency is still without an obvious candidate. According to some observers, Quinn’s next move on paid sick leave could play a role in determining whether or not they wind up backing her.

“The progressive Jewish community, with its deep, longtime narrative of social justice and aggressive fairness, is in no way cemented to Speaker Quinn,” said Michael Tobman, a New York City-based political consultant.

The letter, signed by forty rabbis, asks Quinn to pass a bill called the Paid Sick Time Act, Intro 97. That bill is still being revised, but would require most New York City businesses to provide a handful of paid sick days each year.

Mayor Michael Bloomberg also opposes the measure. Supporters believe they have enough support in the City Council to override a potential mayoral veto.

Similar legislation has passed in recent years in Connecticut and San Francisco. The New York City bill was first introduced in the City Council in 2010.

The rabbis are looking for a mayor who is “sensitive to the issues of the vulnerable, of the workers who support the city,” said Rabbi Rolando Matalon, spiritual leader of Congregation B’nai Jeshurun on Manhattan’s Upper West Side and a co-sponsor of the rabbis’ letter. “If [Quinn] can support this bill, this act, it will send a message, a clear message, that she has these concerns in mind.”

While Quinn has opposed the New York City bill, Public Advocate Bill de Blasio, another presumptive mayoral contender, has offered vocal support of the proposal. Until 2010, he represented the liberal, heavily Jewish Brooklyn neighborhood of Park Slope and the Orthodox Brooklyn neighborhood of Boro Park in the City Council. “They could absolutely, easily vote for Bill de Blasio,” Tobman said of the city’s liberal Jews.

In a statement emailed to the Forward, Quinn restated her opposition to the paid sick leave law. “I believe providing paid sick leave to hard working families is a worthy and admirable goal,” Quinn wrote. “However, with the current state of the economy and so many businesses struggling to stay alive, I do not believe it would be wise to implement this policy, in this way, at this time.”

Some political observers thought the paid sick day issue and rabbis’ position wouldn’t carry much weight with city Jews. “Anytime a respected member of the clergy speaks out, public officials will always pay attention,” said Evan Stavisky, a partner at New York political consultancy The Parkside Group. “But does this mean that the congregants from these synagogues will vote specifically on this issue? That’s probably still an open question.”

Even some of the rabbinical signatories weren’t sure that the issue would impact the votes of their constituents. “The truth is it’s probably not a central issue on the agenda of most congregants,” said Rabbi Yitz Greenberg, former president of the Jewish Life Network and a signatory to the letter. Still, he added, “I personally felt it was morally a very significant one.”

Other signatories said that they hadn’t had the mayoral race in mind when signgin the letter. “This is a crucial labor right,” said Rabbi Jill Jacobs, executive director of Rabbbis for Human Rights – North America. “I want to know that people who are working hard are able to take care of themselves, health-wise, I want to know that if I go to a restaurant the people who are serving me don’t have the flu.”