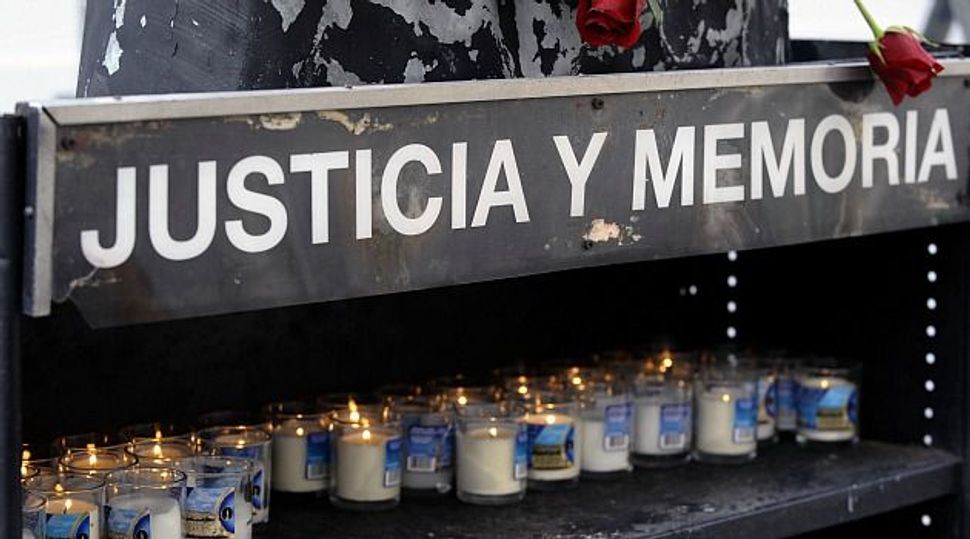 Justice and Memory: Candles burn at a memorial to the 85 victims of the 1994 terror bombing of a Jewish center in Buenos Aires, Argentina.

Three days of negotiations between Argentina and Iran over the bombing of a Buenos Aires Jewish center have been “very positive,” Argentina’s Foreign Minister Hector Timerman announced.

The statement came Wednesday at the Government House after three days of meetings between authorities of both nations at the United Nations’ headquarters in Geneva, Switzerland. “

“The only commitment is to the right of the victims and their families to find the truth and justice,” Timerman, who is Jewish, said. Timerman also announced new negotiations with Iran scheduled for November

“We condemn terrorism and reject the accusations against our citizens,” the Iranian spokesperson for the county’s Foreign Relations Ministry said Wednesday. “Negotiations with Argentina are on due course and will continue until a clear conclusion is reached,” he told reporters. The Tehran representative affirmed that Iran is “willing to undertake a detailed revision process to help determine who the perpetrators were.”

After the Iranian statement, AMIA Jewish Center President Guillermo Borger said that the opportunity for dialogue had “come and gone” when the “Iranian Foreign Ministry upheld that its citizens have no connection to the attack.” The AMIA president’s opposition to the current dialogue was featured Wednesday on the cover of the best selling newspapers in Argentina today.

Prior the meeting, Israel, the United States and the Argentinean Jewish community spoke out against the meetings. Relatives of AMIA victims and Jewish leaders also have urged their government not to negotiate with Iran.

On Monday, after the first day of negotiations, B’nai Brith International stated that “such a political negotiation could violate Argentina’s own constitution, which calls for the extradition of those accused in the attack. Accordingly, no political negotiation can be done while there is a judicial investigation.” The statement released from Washington also said that “Iran has steadily infiltrated Latin America, creating strong and dangerous ties with Venezuela, Bolivia, Nicaragua, Cuba and Ecuador These meetings Argentina is holding give undue legitimacy to a terror-sponsoring regime.”

The 1994 attack on the Jewish community’s main complex in Buenos Aires killed 85 and wounded hundreds. Iran is accused of directing the bombing that allegedly was carried out by the Lebanon-based terror group Hezbollah.