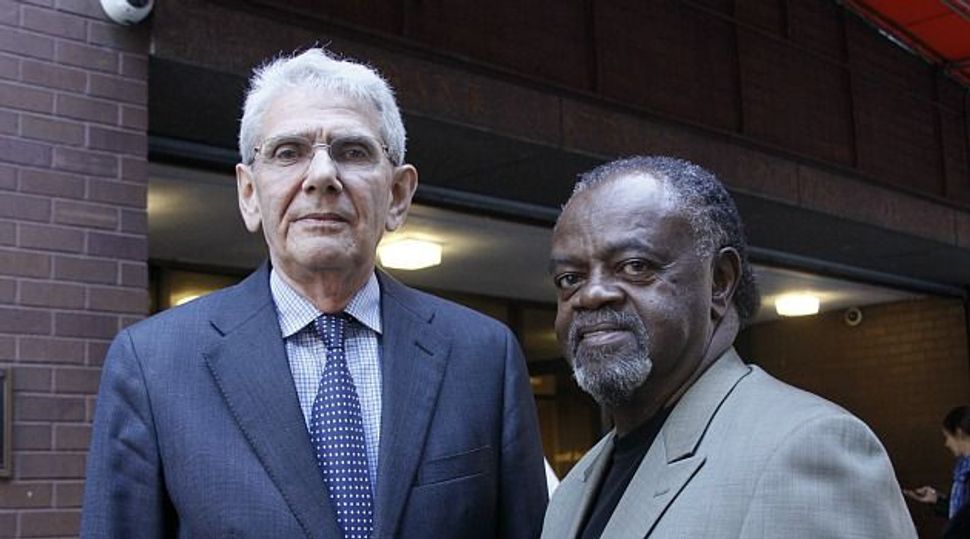 Fight the Power: Activist Oscar Cohen and the NAACP are fighting the Orthodox-dominated school board in upstate East Ramapo, N.Y. Image by Shulamit Seidler-Feller

After a decade of fighting a public school board dominated by Orthodox Jews in suburban New York, Oscar Cohen, a soft-spoken 71-year-old with a reputation for composure, is starting to get angry.

“You have eight school districts in Rockland County,” the retired school administrator told the Forward recently. “One is cutting every nonmandated service to the bone. Seven are not. Ninety percent of the kids going to the one are children of color. Is something wrong with that picture?”

Today, Cohen, is an activist with the NAACP, which is warning that racial tensions are boiling over in the East Ramapo school district. The school board, the group charges, is stripping services from public school children and channeling resources to benefit the Orthodox parochial schools attended by the school board members’ own children.

The school board disputes the NAACP’s allegations.

When the historic civil rights group’s New York State division called on the governor to intervene at an education reform hearing recently, one of the NAACP’s representatives was African American. The other was Cohen, a Jew from the Bronx.

Cohen and the NAACP’s latest push is to convince New York State Governor Andrew Cuomo to convene a task force that would fundamentally change how public education is funded and governed in East Ramapo and similar districts.

Cohen said these drastic steps come after Orthodox members of the East Ramapo school board rebuffed efforts by him and his NAACP colleagues to engage in a dialogue directly.

Daniel Schwartz, president of the school board, told the Forward that the 2011 effort to begin a dialogue ended after a single meeting, because of “broad issues concerning the nature and the tenor of how the conversations would take place.” He would not be more specific.

The effort to reform the board drew little attention for years outside the pages of the Forward and The Journal News, an upstate New York paper. But this past summer, that changed when a not-for-profit law firm, with Cohen’s encouragement, filed a lawsuit and an administrative complaint against the school board.

Cohen isn’t a party in the suit. But his slow, methodical work in East Ramapo has made him one of the most influential figures in the diverse group of activists striving to reform the troubled district.

“The local schmuck like me just knows I’m pissed off about something,” said Steven White, an East Ramapo parent who has run unsuccessfully for a seat on the school board. “I explain to Oscar, and Oscar hears me and understands on a deeper level, about exactly in what way is this something that is not just another parent complaint; it… represents a pattern of discrimination.”

Cohen grew up in the Mosholu Parkway neighborhood of the Bronx and spent most of his professional life at the Lexington School for the Deaf, a leading residential and day school for the deaf and hard of hearing in Queens. He lived in the Bronx with his three children, who are now grown, and with his wife, who died last year, and led the school as its superintendent for two decades. Cohen’s parents were deaf, though he is hearing.

“The deaf community was my life,” he said. In 2001 Cohen left the school, ready to move on. He went to work for Ralph Lauren, a childhood friend from the old neighborhood. The two had grown up playing ball together, and Lauren hired Cohen to run his charitable foundation, which he did until 2008, funding cancer care and education initiatives, and running a volunteer program.

Cohen retired for real in 2008. He lives today in Chestnut Ridge, a suburban town in the East Ramapo district and stays in touch with his children — one a teacher, one a data manager and one a novelist.

After retirement, Cohen began to devote his attention to the problems in the East Ramapo district. It wasn’t his first effort at addressing what he saw as racial inequity in public schools. Years earlier, while living in Nyack, N.Y., he worked to force the local school district to address what Cohen characterized as unequal treatment of nonwhite students in the Nyack system.

“It became clear, even though Nyack was integrated, there were two [public school] systems,” Cohen recalled. “There was a system for children of color and a system for white kids.”

His own children, one of them an adopted African-American boy, were students in the Nyack system. Cohen became chair of the education committee of the Nyack NAACP and embarked on a campaign that eventually drew the attention of the state education department. His campaign eventually forced the district to bring in experts to evaluate how to change the culture of the district’s schools.

The East Ramapo effort has so far eluded any such clear-cut solution. Cohen’s chief ally in his current struggle is Willie Trotman, president of the Spring Valley chapter of the NAACP. The two first met in 2002.

“Every once in a while, someone might say something that angers him, but it’s very, very rare,” Trotman said of Cohen. “He’s always composed, always ready.”

The East Ramapo district includes large Hispanic and Haitian communities. It also covers the Hasidic enclave of New Square and the largely Orthodox town of Monsey. Orthodox Jews don’t send their children to public schools, but they do pay taxes into the public school system, and they do vote — in large numbers — in the local school board elections.

Seven of the nine school board members are Orthodox. While 9,000 students attend public schools in the district, another 20,000 attend private schools — many of them religious Jewish schools. Those schools are eligible for some public funding.

Meanwhile, only 7% of public school students in the East Ramapo district are white. None of the seven other districts is less than 40% white.

Lately, long simmering tensions over the board’s management of the public schools have come to a boil.

Over the summer, Arthur Schwartz, an attorney with the not-for-profit law firm Advocates for Justice, filed an administrative complaint with the state education department and a class action lawsuit against the board. Schwartz said that his involvement in the case came about after Cohen reached out to him.

As the lawsuit moves forward, Cohen is pursuing a different track. Cohen and Trotman presented the East Ramapo situation to the governor’s New New York Education Reform at a meeting in Manhattan on October 16. The NAACP asked Cuomo to put together a task force charged with entirely rethinking how the district is run.

If accepted, the proposal could have an impact far beyond East Ramapo, in other New York districts like the one in Lawrence on Long Island that have large Orthodox populations.

“We’re not trying to demonize the Orthodox and ultra-Orthodox community; we’re saying there’s a problem here. They have their needs, and we respect those. But the secular community has its needs,” Cohen said. “What I would like — and what Willie [Trotman] and the NAACP would like –– is for the Hasidic community and the NAACP together to go to the legislature and go to the governor and say together we’re asking for this issue to be addressed and for there to be a rethinking to try to come up with a solution, because it’s not going to go away.”