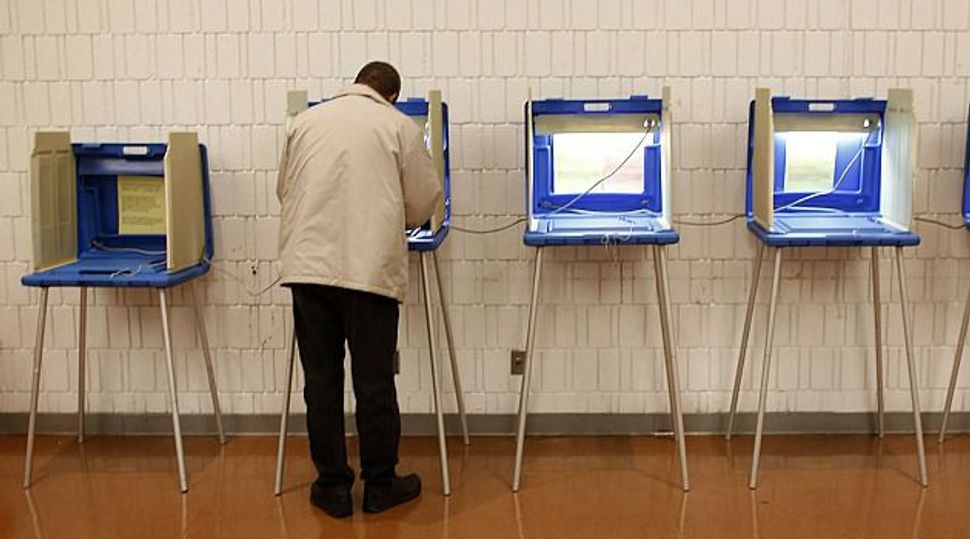 In 2012, Jews were supposed to vote on Israel and Medicare.They didn’t.

Jewish political groups spent millions making the case that Mitt Romney would be tougher on Iran or that that Obama would protect Florida seniors from Paul Ryan.

Their efforts didn’t have much of an impact. Obama won re-election with 69% of the Jewish vote, only a few percentage points fewer than he won in 2008.

In Florida, where seniors are increasingly destitute, voters said they don’t think that any outcome in the presidential election will help. In Ohio, where formerly middle-class Jewish families are struggling to get by, Jews told the Forward that they had tuned the race out.

“I do not think the election will fix the economic situation in our community,” wrote Barry Silver, 55, a Reform rabbi at a congregation in Lake Worth, Fla., and a vocal Obama supporter, in an email sent days before the vote. “If Obama is elected, the situation will be similar to how it was before unless some outside forces make it better.”

In places like Lake Worth, where the foreclosure rate outpaces even the Florida average, Silver isn’t alone. In conversations on the ground in the final weeks of the campaign, and interviews conducted on the eve of the election, some Jewish voters argued that no political outcome from the presidential race will solve the economic crisis still strangling their communities, a crisis still evident in high unemployment rates and stagnant housing markets.

The Jews in these communities are not without hope. But they’re not placing that hope in the political system. Anthony Fratello, 40, a Reform rabbi in Boynton Beach, Fla., wrote that the “fact of the matter is I don’t believe that whoever is elected is going to change much,” in an email days before the race. “I have read the news that suggests that things are on the uptick and will continue that way [through] natural forces. That is what I am putting my faith in, quite frankly.”

Arnold Menzer, 78, a member of Fratello’s synagogue, agreed. “The economic situation is improving slowly and will [continue to do so] whomever gets elected,” he wrote.

A vague faith that unspecified “natural” economic forces will end the ongoing economic crisis probably isn’t what Republican and Democratic operatives hoped American Jews would be bringing with them to polling stations on November 6.

For Republicans, this was supposed to be the year that Obama’s 2009 efforts to push Israel to freeze West Bank settlement growth would take a bite out of the 78% of American Jews who voted Democratic in the last presidential election. Democrats, for their part, were sure that Romney’s selection of Ryan as his running mate would drive wavering Florida Jews back to the Obama camp.

Both sides were wrong. In the end, the Democrats did lose a bit of ground – but not much. National exit polls, plus surveys by Republican and Democratic Jewish groups, all agree that Obama won about 69% of the Jewish vote this cycle. Republicans say that’s down from 78% in 2008, while Democrats maintain that the more accurate 2008 figure is 74%. Either way, it’s not a major shift.

The Republican drive to win Jewish Democrats shifted earnestly into gear in June 2011, when Anthony Weiner resigned from his seat in the House of Representatives. The resignation, brought on by a Tweeted photo of Weiner in his underpants, led to a special election in Queens in which Republican Bob Turner pulled off a shock victory.

Due in large part to the political wiles of Ed Koch, Turner’s victory in the heavily Jewish outer-borough district was portrayed as a Jewish rejection of Obama’s Israel policy. Republican Dan Senor, who later joined the Romney campaign as a key foreign policy adviser, argued in The Wall Street Journal in September 2011 that the Turner win pointed to the possibility that Obama would suffer steep losses among Jews in November 2012.

Early in the cycle, there were signs that the tactic was working, at least among the wealthy Jewish donors. As the Forward reported in March, some of the ultra-wealthy Jews donating to the pro-Romney super PAC Restore Our Future had no history of giving to Republican causes. A few had even given thousands in individual donations to Obama in 2008. In the meantime, some of Obama’s highest-profile Jewish fundraisers from 2008 were not giving to the 2012 effort.

Democrats took the attacks seriously. The Obama campaign released its own mini-doc in January. The National Jewish Democratic Council released a slightly ham-fisted video in August of Israelis praising Obama. Even the Jewish Council for Education and Research, a super PAC known for raunchy pro-Obama YouTube videos, posted an ad in October in which a young, dreadlocked Jewish woman broke from a string of cheesy Yiddishisms to gaze into the camera and earnestly describe the relationship between the United States and Israel in a crooned couplet: “Our alliance/stronger than ever.”

The war over whether Obama was a friend or an enemy of Israel was designed to whip up excitement among each side’s Jewish base in the swing districts. In the Las Vegas Jewish community, it worked. At a synagogue political forum attended by a Forward reporter in a suburb south of the city just weeks before the election, fired-up attendees booed hawkish Democratic Senate candidate Shelley Berkley as she defended Obama’s position on Iran.

Outside Las Vegas, however, Republicans seemed to have a harder time getting the message to stick. Emblematic of the difficulty was the case of Ed Koch, the former New York City mayor whose declaration that the Turner race was a referendum on Obama’s Israel policy rallied the entire Republican effort. Despite his harsh criticism, by the summer Koch was telling the Forward that he planned to stump for Obama in Florida. In a video released in late October by the Obama campaign, Koch endorsed the president, a silver menorah visible just over his shoulder.

“He’s listened to the Jewish community and proven himself a true friend of Israel,” Koch said.

But the Republican Jewish activists weren’t the only ones whose grand attacks seem to have sputtered. When Romney chose Ryan as his running mate in August, some Jewish Democrats declared Florida all but won. Ryan had advocated a budget plan that would have led to major changes in Medicare, the federal program that provides health insurance to retirees and on which millions of Florida seniors rely.

“Romney has made my job much easier,” Koch told the Forward in the days after the Ryan selection.

Yet the Florida bump Democrats expected never came. Obama held a slight lead in the state in August; it grew a bit in September, but was wiped out by Election Day. As of this writing the state is still too close to call.

In conversations with Jewish seniors, it was clear that the Ryan pick and the Medicare issue hadn’t changed many minds. Older Democrats expressed fears of the Ryan budget’s supposed designs on Medicare, while older Republicans talked about Obamacare’s supposed impact on Medicaid.

“They do not seem to grasp that the taxes will rise in Obamacare, that [Medicare] offers less, that some diseases will not be treated in the elderly,” said Tybee Zuckerman, a frustrated Romney supporter in Cleveland, of Jews backing Obama.

Those for whom the Medicare issue didn’t confirm previous biases mostly seemed put off by the charges and counter-charges.

“I don’t know who to believe when they’re talking to each other,” said Buddy Marks, 72, a resident of a retirement community in Boynton Beach, Fla.

Some young radicals whom the Forward interviewed in Lake Worth said they had decided not to vote at all. Older Jews said that they empathized with their alienation.

“I can understand these kids. I really do,” Menzer, the 78-year-old Floridian, told the Forward in September. “The society has changed.”

These expressions of a lack of faith that government can solve social and economic problems — admittedly anecdotal — are out of step with an American Jewish tradition that has historically bought heavily into the power of government to effect change.

Academic experts the Forward contacted who study the American Jewish community warned that there was no evidence that the disenchantment Forward reporters saw on the ground pointed to a broader Jewish communal trend. Still, some speculated on what these observations might mean.

Jacques Berlinerblau, director of Georgetown University’s Program for Jewish Civilization suggested that the demographic demise of the Jewish teacher and civil servant might be changing how Jews think about government. “I would venture that there has been a huge drop-off in Jews working in the public sector,” Berlinerblau said. “And that might be impacting Jewish views on government.”

Vast numbers of Jews worked as teachers and had joined teachers unions in past decades, he noted. “That generation is gone,” Berlinerblau said. “The era of the Jewish teacher, a heroic American icon — that’s passed.” Ira Sheskin, director of the Jewish Demography Project at the University of Miami’s Miller Center for Contemporary Judaic Studies, suggested that Jews are simply frustrated with congressional gridlock. “I can see people saying that right now who are pretty disgusted with the fact that Congress seems to be unable to get very much done,” he said.

Sheskin’s observation was borne out in some interviews with voters. “I am disenchanted with the refusal of so many members of Congress to be willing to cross party lines and do what is in the best interest of the country,” said Jim Samuels, a Jewish Obama supporter in Cleveland.

It’s possible, too, that the frustration and disenchantment are simply a function of a long election taking place in a troubled economy.

“I think people are just tired,” said Raphael Sonenshein, a professor at California State University in Los Angeles. “People are always annoyed at the government. That’s a no-brainer. That’s what we in political science would refer to as a ’ ‘duh.’”

The morning after the election, one young Jewish voter, at least, was hopeful. “You know, I’m optimistic for the future,” said Marty Paz, 33, a Las Vegas resident who was forced to take a lower paying job in the midst of the recession. Paz said he had settled on Obama after Romney picked Ryan as his running mate. “I think the country’s going in the right direction, ” Paz said. “I do see an improvement. ”