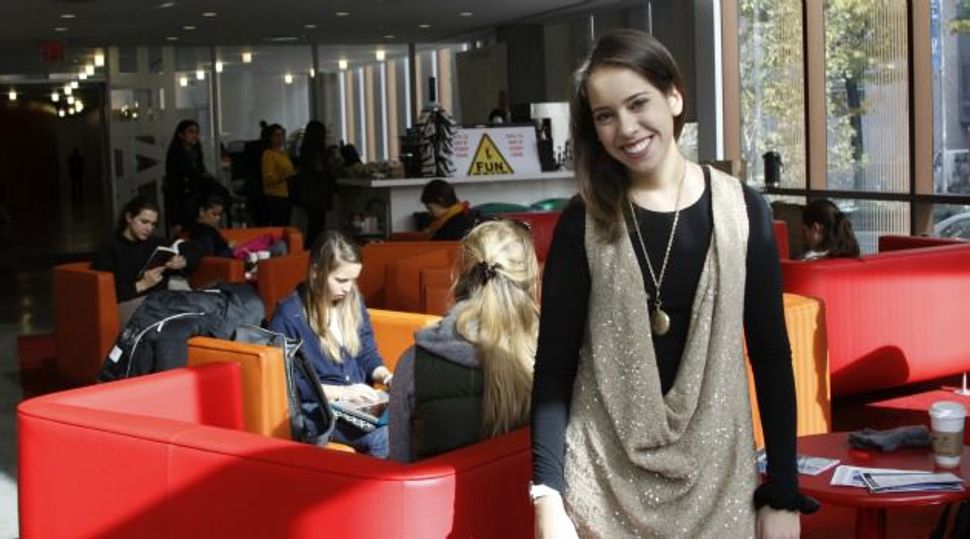 I’ll always remember it because it was the first,” said Chana Lavaddin, 21, a sophomore at the University of Pennsylvania. In the way that some convey the minute details of their first sexual encounters, Lavaddin recalled the chapped skin and firm grip of the first man who shook her hand, a former professor congratulating her on winning an award. “It’s intense when you haven’t touched anyone and a man’s hand is on your arm. You just pay more attention because it’s never happened.”

Most students head off to college with a common set of goals: learning, making friends, avoiding the “freshman 15,” improving beer-pong skills and, not least of all, hooking up. But Lavaddin is one of a subset of Jewish students that has another concern in mind: avoiding physical contact with the opposite sex. These students are shomer negiah, meaning they follow the Jewish law that prohibits men and women from touching. Though some rabbis argue that shomer negiah only applies to romantic situations, many unmarried Jews — from Modern Orthodox to ultra-Orthodox — try to avoid physical contact with the opposite sex altogether.

Many Orthodox students attend sex-segregated schools like New York City’s Yeshiva University for men and its sister school, Stern College, where being shomer negiah is practically a given. But every year, a number of observant families send their children to elite secular institutions, forgoing the religious atmosphere for a school’s stellar academic reputation. Oren Rabinowitz, 22, chose American University because he valued a strong political science department. “I came for academics, not necessarily for the social [life],” he said. Ariella Levine, a 22-year-old senior at Penn, who is more observant than the rest of her family, has two older siblings who attended Ivy League schools. “I wasn’t allowed to apply to Stern because it’s not good enough academically,” she said.

Shomer negiah is a highly demanding lifestyle even in Orthodox settings, but religious students say the environment at secular colleges poses extra challenges. “I knew there would be a lot of issues I couldn’t foresee ahead of time,” said Leah Rothstein, 22, a senior at Barnard College, who attended a Jewish high school. “Being in coed environments was a big deal. It was a shock to my system. Who are these people? Should I talk to them?”

Everything from meeting with professors to hanging out with dorm-mates down the hall can pose obstacles for those practicing shomer negiah. Levine tries to prepare in advance for a potential handshake whenever she meets with a male professor or possible employer. But she also tries to be lighthearted about it. As a teaching assistant for a computer science class, she sent an email to a male student she needed to work with one-on-one, explaining, “I don’t have physical contact with men, but by the way, I am only as awkward as the rest of the computer science department.”

Rivka Holzer, 20, a sophomore at Barnard, worried that an acting class would potentially involve violating shomer negiah. However, her professor was understanding and asked her to speak about the practice to the class. She explained, “Touch is very sacred. Some people save sex for after marriage, but as an Orthodox Jew, I save touch for after marriage.” Her classmates were supportive, and one gay male student jokingly chimed in that he doesn’t touch girls.

Though some said that fellow students were initially confused by the practice, shomer negiah was rarely a hindrance to friendships. In fact, Holzer has been pleasantly surprised that her “non-Orthodox friends are very fascinated by it and think it’s cool.” She recalled a study session with a classmate for an exam on the reproductive system that shifted into a personal conversation about sex. “She talked about her sexual encounters, and when I told her I was a virgin and didn’t touch men, she said ‘Your sex with your husband is going to be amazing,’” said Holzer.

At the same time, highly observant students sometimes feel there are few who can empathize with them, even among other Jews. While Hillel students advise each other on how to handle a final exam scheduled on the Sabbath, the same kind of support isn’t available for shomer negiah students, said Levine. “If you’re doing something above and beyond what the community standard is, it has to come from you because if you have difficulty [there is] nowhere you can go for help.”

Lavaddin admits that she faces “obstacles girls at Stern won’t face in their life,” but her commitment to shomer negiah is unwavering. “You can’t pick. You’re a Jew, and you have to do all of it,” she said. “It’s like saying ‘I don’t keep Shabbos.’ It’s a commandment; that’s it.”

One of the biggest challenges is avoiding the hookup culture. “Obviously, I’m not going to crazy parties because that’s not going to lead to anything that helps with my shomer negiah,” said Rabinowitz. “But I’m not sure I’d go anyway because I’m not the person who’s into crazy parties.”

Similarly, Levine notes that even without the concerns for shomer negiah, the frat parties don’t appeal to her. “I purposefully make it foreign because I don’t want anything to do with it,” she said.

Other students feel an even stronger sense of repulsion toward casual canoodling on campus. “It generally disturbs me when I go out on a Thursday night and see people wasted, half-dressed, coming from these parties,” said Jacob Kaufman, a sophomore at Penn. “I think going to these parties is mindless and corrupting, which is why I divorce myself from it to a certain degree.”

But others can see the allure of the hookup scene “At times are there parts of me drawn to it? As an adult male sexual being it has its appeal,” said Doniel Sherman, 21, a sophomore at Penn.

Lavaddin was also candid about the temptations. “Human nature is if you’re a guy and you’re a girl, you want to touch. Sometimes, you want to break out of shomer negiah and make out with a guy.” But it’s just one of the many challenges of being an observant Jew. “I was taught there are a lot of things you have to keep in Judaism that go against human nature. It’s a test.”

Yet, since college is often a time for questioning beliefs and self-discovery, some students realize over this time that shomer negiah is not right for them. Jordan Katz, who graduated from Columbia University in 2011, began practicing shomer negiah in 11th grade after years of involvement with the Orthodox organization the National Conference of Synagogue Youth. At the time, she wanted to take on “one more tangible thing” to prove how religious she was to her peers and, especially, her advisers.

Although she was very involved with the Jewish and specifically Orthodox community at Columbia over her four years, her practice of religion became “much more intellectual and philosophical.” As she re-examined it, shomer negiah seemed juvenile to her. “I think a lot of it is silly now,” she said, “like when you poke someone with a pen to get their attention. It’s easier to do when you’re younger.” Not only did Katz feel she was maturing out of shomer negiah, but she also believed it inflated the significance of minimal physical contact to a deleterious effect. “It places such a pressure on touch. It’s just not that big of a deal,” she said. “It puts so much unhealthy energy into each time you touch someone because it’s so important. It’s not the way to conduct your life.”

Katz added many of her observant friends stopped upholding the practice by the time they were in their early 20s or had been in a relationship for a year. “I’ve found no one actually does it,” she said. “If no one’s doing it, why are we doing it?” Ultimately, she believes shomer negiah needs to be re-evaluated by religious leaders because it encourages a culture of hypocrisy toward physical contact. “Is it worse to hug friends in public or make out with your boyfriend in private? Everyone’s cheating, but no one is telling anyone.”

By the second semester of her senior year, she had started openly hugging some of her male friends and not caring whether photos of her with arms around guys appeared on Facebook. “The fear element I had when I was younger is not in me so much anymore — the fear of ramifications or consequences,” she said.

Conversely, some students decide to take on shomer negiah to help them navigate the four years of college. Rebecca Khalandovsky, 22, a senior at Princeton University, was not observant when she began school, but over time, she found shomer negiah to be the best tool for handling her evolving relationships with men in college. She chose to take on the rule after her freshman year, when she noticed that with some male friends a single embrace “would lead me to think, ‘what does he think? Should I ask him out? What should I do?’” This physical contact resulted in “a lot of wasted emotional energy and time and thought. It wasn’t an efficient system of evaluating of who I should be in a relationship with.”

More than a matter of temptation, being shomer negiah is often a matter of logistics. Aside from the fact that the American college campus often seems like a Sodom and Gomorrah built on red Solo cups and Trojan wrappers, even friendly high-fives and handshakes can pose a challenge to those who practice shomer negiah.

And hugs with friends are harder to resist than sexual relations. Sherman recalled that when a good female friend who had recently graduated came back to visit, it was difficult not to hug her. “It was not sexualized, but it was about the emotions for the person,” he said. “You can’t communicate with touch — only words — and words have to suffice. There are emotional wants.”

However, after nearly two years of practicing shomer negiah, Khalandovsky firmly believes that emotional connections can be established even without physical contact. “One can comfort and empathize with another person through speech,” she said. “It requires more effort and is harder without touch, but both people clearly see what the input and output is.”

Emily Shire is the chief researcher at The Week magazine and is a freelance writer. Find her work at emilyshire.wordpress.com.