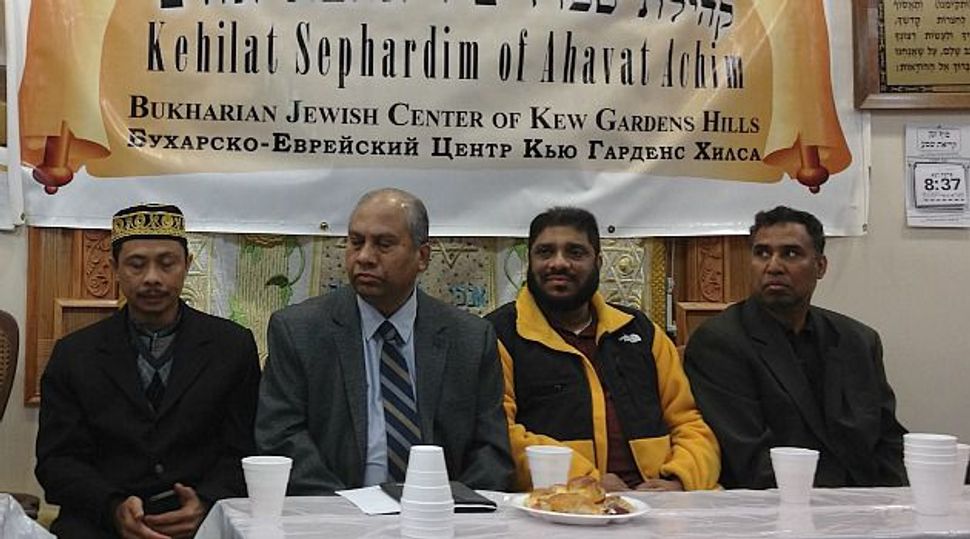 Work To Do: Muslims and Jews at a synagogue in Queens, N.Y. stuck to their scheduled business even as the fighting raged in Gaza. Other interfaith groups did the same, but some chose to take on the conflict head on. Image by paul berger

As the death toll from the Israel-Gaza conflict climbed, a group of Muslims and Jews met at the Kehilat Sephardim Bukharian Jewish Center, in Queens. Instead of talking about the violence consuming the Middle East, the group focused on the mundane at the November 18 meeting: Jewish concerns about a Muslim school poised to open blocks from the center, and the Muslim community’s need for a speed bump outside its community center, less than a couple of miles away.

“Both sides have the sense that avoiding [the conflict] is better in order to achieve the greater purpose of the meeting,” said Imam Shamsi Ali of the Jamaica Muslim Center, a participant at the meeting.

The outbreak of violence between Israelis and Palestinians, as with other outbreaks of violence in the Middle East, has tested intercommunal relations across the United States. Some groups, like those at the Queens synagogue, chose to address the violence only by way of wishing that peace would soon return to both sides and then moving on to other, less-intractable matters. Others wanted to meet and work through the issues as soon as possible.

“I have been getting emails from people saying, ‘We need to meet, right now,’” said Marcia Kannry, founder of the Brooklyn-based Dialogue Project.

Nadia Saah, a Palestinian American, belongs to an interfaith group of women in the Northeast that has been meeting monthly for almost four years.

The graphic images streaming out of Gaza have made daily life very difficult. “It’s hard to not carry all of this with you throughout the day into the night,” Saah said.

Saah’s group includes an Israeli, two American Jews, two Muslim Palestinians and Saah, who was raised in America as a Catholic. By chance, the group was formed shortly before Operation Cast Lead, Israel’s invasion of Gaza, in 2008. At least two members of the group, which numbered 10 at its outset, left because of the conflicts spawned by the war.

“Cast Lead was so hard and so painful and so difficult,” said Kathleen Peratis, another member of the group, who is Jewish. “A couple of our members … couldn’t get over it and around it and past it.”

This time around, Peratis said, the group had built up such trust that members have been able to discuss each side’s culpability and remorse for the violence “without anybody trying to be right.” So far, at least.

“It was really quite amazing, and especially so because it was so different from four years ago,” Peratis added. The meeting at the Kehilat Sephardim Bukharian Jewish Center had been arranged months in advance, part of a regular series organized by the Foundation for Ethnic Understanding. Walter Ruby, the foundation’s spokesman, said the conflict was not being “brushed under the rug,” but the group believes that “more can be accomplished by focusing on what we can do here.”

Ali said the Middle East conflict was one of the most important issues for the Muslim and Jewish communities. But talking about the conflict can be an impediment to interfaith dialogue that aims “to build a sustainable relationship and a strong future partnership” between Muslims and Jews, he added.

Across the nation, many other interfaith groups appeared to be focused on previously scheduled projects, such as feeding the hungry, or performing other community service activities.

Eboo Patel, founder of the Chicago-based Interfaith Youth Core, said that by working together on universal issues, such as poverty and homelessness, Jews, Palestinians and Muslims could build relationships that allow them to keep talking during difficult times such as these.

“If you’ve done hurricane relief with other religious groups and gotten a deep sense of the other religious community’s commitment to life-affirming activities,” Patel said, “that’s a very good foundation to begin to talk about something much more tense and challenging.”

But some interfaith organizers said that brushing over the Israeli-Palestinian conflict ignored one of the central reasons to meet, which is to explain and to try to understand the other side’s viewpoints.

“We’re not going to solve the military and strategic problems of the Middle East in our own backyard,” said Abby Stamelman Hocky, executive director of the Interfaith Center of Greater Philadelphia. “But we are going to work together to make sure we are in deep relationships and friendships so we can understand the nuances.”

Many Muslims, Jews and Christians told the Forward that the concept of listening to each side’s point of view was of paramount importance.

Palestinian critics of some of the interfaith initiatives said that framing the Israel-Palestine issue as one of two sides with equal grievances is wrong.

Ali Abunimah, a leader of the Israel boycott, said Jews and Muslims could work on whatever local issues they wanted, but any dialogue about Israel-Palestine “should be clearly in the context of solidarity with the victims of occupation… and calling for justice for Palestinians.”

Saah said she had been challenged many times by Palestinian supporters for her engagement in interfaith dialogue. She keeps at it because it reminds her of “the humanity and the vulnerabilities of the other in a way that is necessary to overcome the situation we are in.

“It enables me to better communicate our narrative and our sense of justice in a way that doesn’t shut people down,” she said.