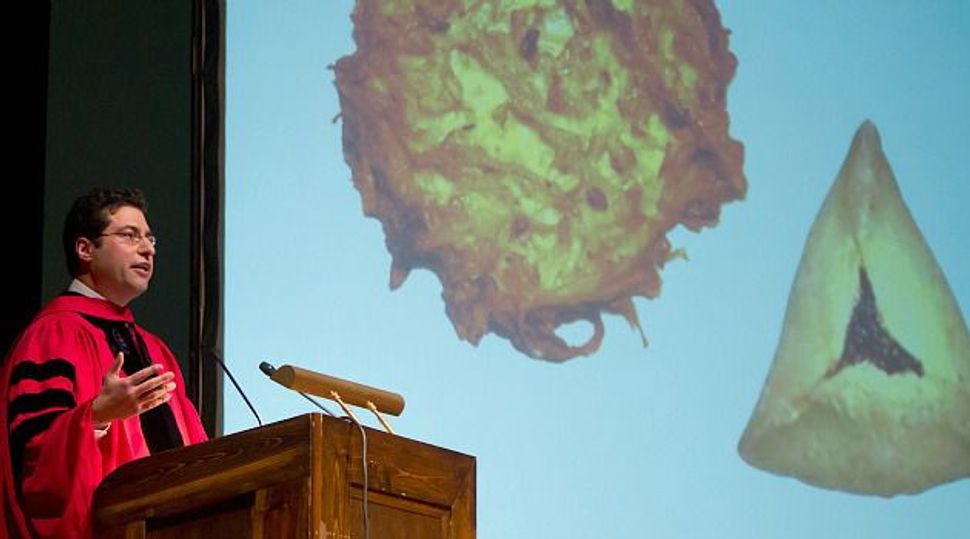 No Fight Daniel Libenson, ousted University of Chicago Hillel chief, speaks at the college?s annual latke-vs.-hamentashen debate. The event was postponed amid turmoil over his firing.

Which are better, latkes or Hamantashen? This year, continued anger among the University of Chicago faculty over the Chicago Jewish federation’s takeover of the campus Hillel means that students there will have to wait a few extra months to find out.

For each of the past 66 years, on the Tuesday before Thanksgiving, professors at the University of Chicago have held a mock-serious debate in front of increasingly large crowds, weighing the merits of the two traditional Jewish holiday foods. Not so this semester. Professors who had committed to the event dropped out over the summer, citing anger over the federation’s firing of the Hillel director and the dismissal of the Hillel board.

“It’s just a stupidly brutal thing to do, and it certainly pissed me off,” said Ted Cohen, a University of Chicago philosophy professor and the Latke-Hamantash Debate’s longtime moderator, of the way the federation handled the Hillel director’s firing.

Cohen’s debate, scheduled originally for November 20, is a major event on the University of Chicago’s Jewish calendar. It filled a 1,000-seat venue on the University of Chicago campus last year, and has been covered by The New York Times and taken on the road for out-of-state showdowns. Cohen will moderate a Latke-Hamantash Debate this academic year, albeit months later, in February. And Hillel itself, which created the event and has sponsored it for more than half a century, won’t have a role.

The disruption around Latke-Hamantash comes as the campus Jewish organizations at the University of Chicago struggle to return to normalcy after the Jewish United Fund/Jewish Federation of Metropolitan Chicago fired Hillel’s executive director, Daniel Libenson, last March and dismissed his board.

Since then, Libenson and his board have split off to form jU, a new campus organization that is operating in competition with Hillel. The Hillel, meanwhile, is on its second interim executive director. And the Jewish Student Assembly, a student group founded to defend student interests amid the turmoil, has “gone into hibernation,” according to its former leader.

Upon dismissing the Hillel board and Libenson, the federation charged that Libenson and the board had mismanaged the Hillel’s finances.

Cohen, who has moderated the annual Latke-Hamantash Debate for each of the past 30 years, give or take, served on the Hillel board years ago and has friends who were among the group of Hillel board members that the federation dismissed. He got the job during the tenure of Rabbi Daniel Leifer, a former executive director of the Chicago Hillel. Leifer died in 1996. “Danny Leifer liked what I did, which was to make savage fun of everyone in the debate,” Cohen said. “I’ve done it ever since.”

Cohen said he was vacationing in Maine over the summer when he received two emails from faculty members saying they wouldn’t participate in the event’s 2012 iteration. The faculty members cited anger at the federation’s dismissal of Libenson and at Cohen’s own decision not to participate in the debate. Cohen told the Forward that his colleagues were misinformed: He hadn’t actually made up his mind at the time that he wouldn’t moderate, but their decisions helped sway him.

Cohen cited personal feelings among the reasons that he had initially objected to moderating this year’s debate. “I am loyal to my friends, and the federation in this really brutal way threw them all out, and they don’t want the Latke-Hamantash Debate to go on,” he said.

The tradition seemed doomed until earlier this semester, when a group of students from the Jewish fraternity AEPi asked Hillel to organize this year’s debate independently. Because of scheduling issues, the event could not be held until mid-February, but Cohen confirmed that he will participate.

Despite the loss of a marquee annual event, Hoffman said she was pleased that the students would be taking on the Latke-Hamantash event, presenting it as a move toward greater student involvement in driving programming. Hoffman also said that when the AEPi students approached her about taking on the event, “I couldn’t say yes fast enough.”

Following his dismissal, Libenson pledged to create a new campus group to carry on his work at the University of Chicago. He’s made good on that pledge. JU has three full-time staff members and two part-time. The organization maintains offices in a church building near campus. Libenson told the Forward that he’s raised most of the $400,000 annual budget he’s projected for this new organization. Board members of his group, many of whom were on the dismissed Hillel board, have given to the effort.

Libenson’s group is offering two internship programs similar to some of those he ran at Hillel. It has also sponsored an off-campus undergraduate apartment for Jewish students, a program that Libenson likened to the Moishe House program that sets up Jewish-themed housing for recent college graduates.

“There’s been tremendous enthusiasm among students to participate in our internship programs and all of our programs,” Libenson said. “Hillel seems to be a nonfactor in whether or not students are participating in our programs.”

Hoffman said that she didn’t mind the competition from Libenson’s group. “From our perspective, there’s more Jewish life happening on campus,” she said. “It’s a win all around.”

Meanwhile, a student-run group founded in May to mediate between the various professional-run Jewish organizations on campus on behalf of students seems to have disbanded. In an email, Doni Bloomfield, who is the former executive chair of the Jewish Student Assembly and a University of Chicago junior, said the group was no longer necessary.

“Due to the candor, conviviality and civility of the Jewish community on campus so far this year there hasn’t been much need for the Jewish Student Assembly,” Bloomfield wrote.