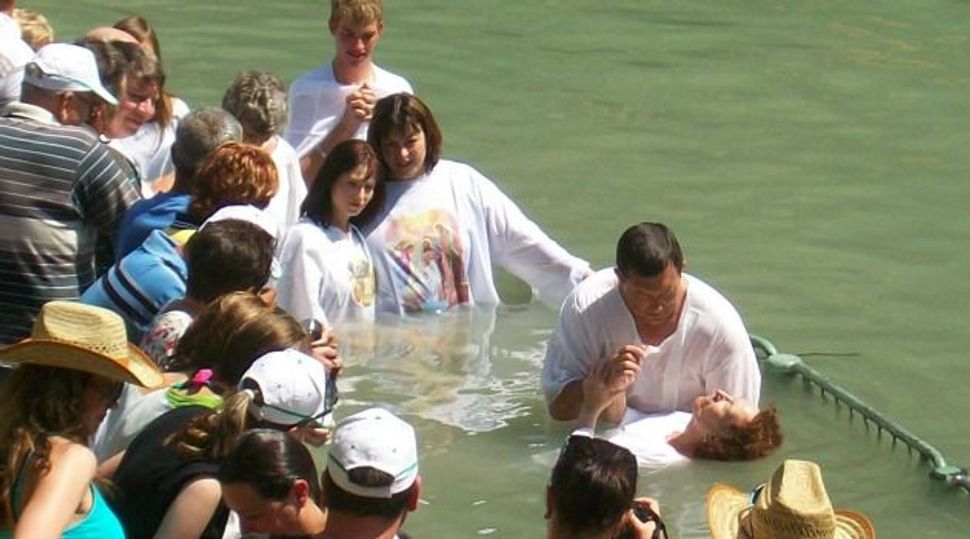 Orlando Soares, a charismatic Christian pastor on pilgrimage from England, emerged from the Jordan River, close to where Jesus is said to have been baptized, beaming with happiness. “It’s like a restart — a declaration I want to do everything again,” he said. “You’re reborn. It represents new life and new commitment to God.”

Busy season is starting at this spot of the Jordan, where it joins the Sea of Galilee.

Over the coming weeks, Christians from around the world will head to Israel to fulfill a dream of Christmas in the Holy Land, and many of them will find their most sacred experience at a site run by Jews. Forget cowsheds, chicken coups, combine harvesters and even computers — baptism could be the new hot kibbutz industry.

This baptismal site of Yardenit is the largest income stream for the second oldest kibbutz in Israel, Kibbutz Kinneret. Though it is not the site of Jesus’ baptism — the actual spot is near Jericho, in the Israeli-occupied West Bank, and wasn’t easily accessible until a couple of years ago — Yardenit is the most popular place on the Jordan River for baptisms.

Back in the early 1980s it was a fish farm. The kibbutz leadership was unenthusiastic when the Ministry of Tourism asked it to change its use, after the death of a pilgrim highlighted the dangers of the haphazard baptism practices. At that time, there was no designated site for baptisms, and the pilgrim was killed exiting his car after parking, as many did, on a busy road along the river so that he could immerse.

“We weren’t excited, but we agreed,” said Yonathan Bobrov, the site’s manager. Bobrov was born on Kibbutz Kinneret 63 years ago and has lived there ever since. “It was only 10 years later that we started to see it as a great thing and see its potential.”

But Yardenit had a long way to go before it became the chic, well-oiled operation that it is today. It now receives 600,000 visitors annually. Some of them baptize in the classic sense of formally admitting themselves to Christianity by entering the river or being sprinkled with its water; others immerse to emulate Jesus and reaffirm their faith.

In the past few years, Yardenit has constructed modern buildings and renovated older ones to offer comfortable changing rooms and showers, along with an upscale restaurant and a gift store that looks like a Christian-themed duty-free shop. It sells everything from bottles of holy water and charms emblazoned with pictures of saints to shofars and tallitot for Christians who want souvenirs recalling Jesus’ own religion.

Upon arrival, guests are asked if they have their own baptismal gowns. If not, they can rent one for $10, or buy one for $23. For $2 extra, the gown comes with a picture of Jesus being baptized on its front, with or without a Russian caption saying “Jordan River.” Like at theme parks, a videographer records group baptisms and shows them on a screen in a stall on the riverbank so that visitors can buy the videos if they wish.

But despite the commercial bent, the place has been tastefully constructed. When Bobrov became manager in the 1990s, he removed the advertisements for soda and ice cream. There are no entrance fees, and pilgrims can visit without spending a dime. And the kibbutz takes seriously its mission statement for the site: to give each visitor a “unique religious experience.” It displays the account of Jesus’ baptism from the Gospel of Mark in 70 languages, and helps groups to run special ceremonies after immersion, sometimes inviting congregations to plant olive trees.

“I think everything that the kibbutz has done is in a very dignified and welcoming manner,” said David Parsons, a senior official at Jerusalem’s International Christian Embassy, one of the main Christian bodies that bring pilgrims to Israel. “There was no site like this before Yardenit and the kibbutz identified a need and answered it with the lovely setting and all the services you need.”

Unlike Parsons, most pilgrims are unaware of the unlikely story of kibbutzniks facilitating mass baptism; they are far too taken with the Biblical story. In fact, while most Israelis have never heard of the site, some Christians regard it as more important than Jerusalem. “This is the most important symbol in Christianity,” said Brazilian Pentecostal pastor Francisco Nicolau, who was visiting the site.

Renato Rogo, 27, from Bristol, England, said, “Every time I read the Bible, I imagine myself in the place I have been reading about, and I’ve been thinking about being here since I became Christian in 2006.”

Some people are convinced that its spiritual power is so strong that it carries even via broadcast. “I saw on television a group of pilgrims baptizing at Yardenit,” said Divanier Barbosa, a 60-year-old tailor from São Paulo. “Then I received the Holy Spirit and started speaking in tongues. I had a vision that I would be here and had to do everything to get here. I had a lot of difficulty with money, but it didn’t matter, I had to struggle to get here.” She said that her immersion didn’t disappoint. “I feel like a new creature.”

Nathan Jeffay is the Forward’s Israel correspondent. Contact him at jeffay@forward.com.