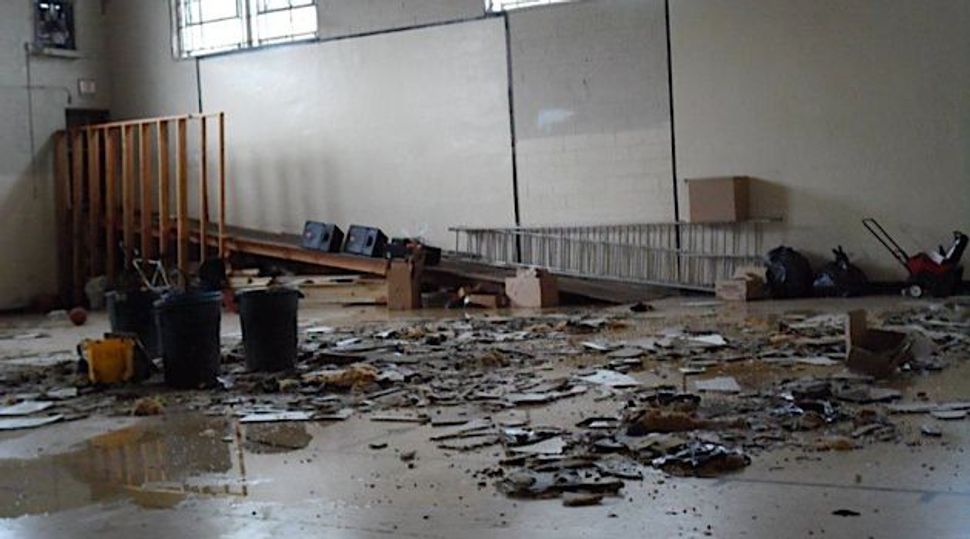 A number of New York synagogues that were seriously damaged by Hurricane Sandy are not only facing mounting repair costs, but also have limited assets available to make the necessary fixes to sustain their congregations.

Using lists from federations, the Metropolitan Council on Jewish Poverty and other local organizations, the Forward surveyed more than 87 congregations to evaluate the extent of the damage wrought by Hurricane Sandy on Jewish houses of worship in the New York area.

The Forward found that 14 synagogues in New York are in dire need of financial help, having incurred $100,000 or more in estimated repair costs, with one synagogue, Temple Israel of Long Beach, expecting to pay $5 million in damages. Of these 14 synagogues, seven did not have flood insurance. Many of these congregations are also housed in aging buildings that are more expensive to repair.

“We don’t have flood insurance, because it was prohibitively expensive,” said Rabbi Jonathan Muskat, leader of Young Israel of Oceanside, on Long Island. Muskat estimated $200,000 to $400,000 of damages to his synagogue and on-site mikveh. “We’re not sure if regular insurance will cover it,” he said. “We probably will not know for a long time.”

The majority of synagogues that were hit the hardest — suffering a range of devastation, from missing roof sections to ruined Torahs — were located in areas that are still struggling to recover from the storm, including Long Island’s Nassau County, the southern shore of Brooklyn and the Rockaways, in Queens.

In Brooklyn’s Brighton Beach, Young Israel congregation had more than six feet of flooding and estimated damages of $200,000. According to a report by local television station NY1, the Friends of Refugees of Eastern Europe of Brighton Beach Synagogue had six Torahs damaged, three of which were ruined. Each Torah was valued at about $50,000.

Less than a mile to the east, Congregation Shaarey Torah had 10 feet of water in the basement, along with damages to its kitchen, dining room and Kiddush room, all of which will cost about $100,000 to repair. One block north of Shaarey Torah, at Chabad of Manhattan Beach, rotted walls in addition to a loss of books, prayer shawls, Torah mantles, refrigerators, tables and chairs also tallied $100,000 in costs.

In Queens, West End Temple, in the Rockaways, reported more than $1 million in damages, while the staff of Howard Beach Judea Center predicted that it would take $100,000 to restore their congregation.

“If someone doesn’t step up and help us, I don’t know what we’re going to do to survive,” said Lisa Mason, an assistant director of the preschool at Howard Beach Judea Center.

The center’s current building is about 75 years old. In addition to losing chairs and tables, the synagogue will need to replace a commercial oven, a refrigerator, a hot water heater and prayer books. Mason said that toys in classrooms were damaged and that walls, floors and the roof must be repaired. Her backyard playground area for her students, which she valued at $30,000, was completely destroyed. Mason found no help available from her insurance company.

“We didn’t have flood insurance, and they considered this to be flood damage,” Mason said. “They gave us $200 for the roof; woo-hoo, what’s that going to do? We pay the large fees year after year, and they can’t help us.”

Mason’s aging building also exemplified another trend: The list revealed a large number of repairs for older synagogues — nine of the buildings with an estimated $100,000 or more of damage are at least 50 years old. President Yehuda Loweff of the Jewish Center of Brighton Beach, which broke ground in 1928, reported that six feet of water had flooded into his building. The storm destroyed the center’s antiquated electrical system, which now has to be replaced to abide by modern-day coding laws. Loweff received varying estimates from contractors, the highest at $200,000, which he said was “higher than what we have available and what insurance would pay for.”

The disparities in repair estimates has caused headaches for other leaders, as well. Stacey Eager-Leavitt, president of South Baldwin Jewish Center, in Nassau County, was given estimates as low as $30,000 and as high as $140,000 for repairs to her congregation. “We can’t pick up the bills ourselves,” she said. “There is no place for us to go, sadly.”

Another aging congregation, the Stanton Street Shul, on Manhattan’s Lower East Side, was awarded a $30,000 matching grant by the New York Landmarks Conservancy’s Sacred Sites Program this spring, but has to raise $30,000 on its own before the grant is awarded. Two years ago, with funding from the David Berg Foundation, the conservancy launched the challenge grant program for historic synagogues in New York City, called the Jewish Heritage Fund. The synagogue will celebrate its 100th anniversary in 2013, and parts of its infrastructure date back to the 1840s.

Esther Malka Boyarin, a member of the synagogue since the 1980s, said that the Stanton Street Shul is not a rich congregation. After the storm, the synagogue organized a Hanukkah party to raise money. It also held a benefit concert and an online campaign to collect donations.

“Things are a little off the beaten path here, [we run events] that are intellectual or fun, but we don’t have a wealthy crowd which comes to the synagogue,” she said.

Boyarin said the grant is essential for financial purposes, but also in preserving the Jewish heritage of the neighborhood. She added that the building has never had a boiler and that its ancient architecture was one of the draws for the Landmarks Conservancy.

“We have to be realistic and say we need to be able to support this,” she said. “This grant is extraordinarily important to us. The Landmarks Conservancy only gives three heritage grants a year. It’s now so rare that it’s precious, and needs to be saved to let people understand how immigrant life worked a century ago.

“That grant means everything. It means money, but it means recognition of a very important sort.”

Rabbi Josh Yuter of the Stanton Street Shul said there was pre-existing water damage in the building and that over the years, there had been a lack of maintenance. “We couldn’t really afford it,” he said.

“The roof is a huge concern, its stability, and it lets in more moisture, which wreaks havoc on the walls,” Yuter said. “It looks small, but it’s a lot of stuff you don’t really see.”

Jewish organizations have been deeply involved in the recovery process, but a majority of financial aid at the moment is being directed toward families. The Orthodox Union has donated $356,000 to a rabbi discretionary fund to help those affected by the storm. Judah Isaacs, the O.U.’s director of community engagement, said that “primarily the use of funds to date is to help individuals at this point.”

In the meantime, synagogues are also struggling to raise funds on their own. The Howard Beach Judea Center recently held a fundraiser, charging $20 per entry; it drew 150 guests. But with the costs of putting on the event, the center netted only $1,500 overall, with an extra $132 raised for the backyard playground.

As early as January 2013, state officials are scheduled to visit the center’s preschool to conduct an Early Childhood Environment Rating Scale test, which assesses the safety and conditions of schools. Mason feared that if $30,000 wasn’t raised in time to fix the school’s backyard, the Center’s preschool license could be in jeopardy.

On a recent springlike day in December, when temperatures reached about 60 degrees, Mason focused on the future and lamented that she couldn’t bring her students outside. “Every day the children ask us,” Mason said. “Today was a beautiful day, and we have nothing to do.”

Below is an extended list of 30 synagogues that incurred damages during hurricane Sandy. The information was provided by individual synagogues and local federations.