Plenty of Money Made at ‘Not-for-Profit’ Cemetery 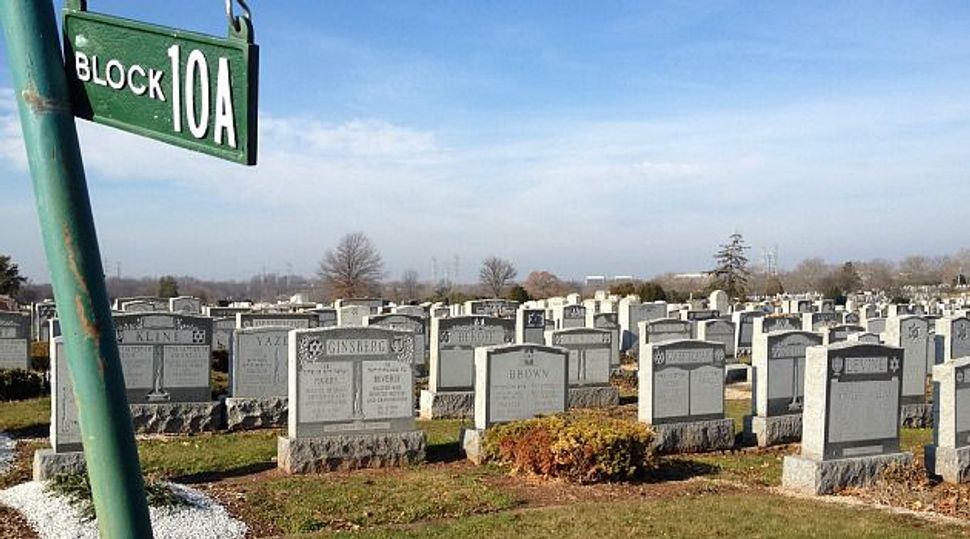 Digging for Gold: The board of not-for-profit Beth Israel Memorial Park in Woodbridge, N.J., is controlled by a management company, which earned a whopping $8.5 million in fees from the cemetery. The arrangement is legal, but raises eyebrows among watchdogs. Image by josh nathan-kazis

A not-for-profit Jewish cemetery in New Jersey has paid $8.5 million in management fees over the past six years to a for-profit cemetery company that controls its board of directors, public records show.

The cemetery company, StoneMor Partners L.P., has said in filings with the Securities and Exchange Commission that the fees it makes from not-for-profits like Beth Israel Memorial Park in Woodbridge, N.J., are roughly equivalent to the profits it would earn if it owned the cemeteries outright.

It’s an arrangement that New York cemetery regulators do not allow. In New Jersey, where critics have decried industry influence over cemetery regulation, the practice is legal. The cemetery executive who first set up the arrangement at Beth Israel is a former chair of the state board that regulates cemeteries.

One charity law expert said that though the arrangement does not breach cemetery regulations, the management fees paid by Beth Israel to StoneMor could breach Internal Revenue Service guidelines barring board members of not-for-profits from earning profits from their organizations.

In recent years, a loose coalition of rabbis and legislators has worked to strengthen New Jersey cemetery enforcement by, among other efforts, reducing the number of cemetery industry executives mandated by state law to sit on the state regulatory board. A bill introduced by New Jersey State Senate Majority leader Loretta Weinberg that would cut down industry representation to a minority on the cemetery board is set to take the first steps toward legislative approval in mid-December.

Weinberg said that the disparity in regulations on management fees between New York and New Jersey is the sort of issue she hopes her legislation will address.

“It sounds like a nonprofit business that maybe should be regulated a little more closely,” Weinberg told the Forward when told of the relationship between Beth Israel and StoneMor.

StoneMor declined repeated requests for comment for this story and would not answer questions submitted to a representative.

Others in the industry, however, say that New Jersey cemetery regulations already go far enough. All New Jersey cemeteries not owned by religious groups are required to be operated by not-for-profit corporations, which is not the case in the vast majority of other states. And New Jersey bars cemeteries from selling gravestones and other merchandise. “These are important sources of income in other parts of the country,” said David Shipper, a cemetery executive whose family controlled Beth Israel until 1995. “If you don’t look at the regulatory scheme in total and only talk about one or two pieces of it, you’re missing the boat.”

Beth Israel sits at the intersection of two highways in suburban North Jersey. A mall lies across U.S. 1 to the north; to the west is the Garden State Parkway. Inside, thousands of graves are spread out over two low hills, the sections separated by stands of evergreens. Rusted gates guard plots belonging to long-forgotten burial societies.

Founded in 1927, the cemetery is one of the largest in New Jersey. On a recent Monday morning, the cemetery’s narrow lanes were crowded with groundskeepers and gravediggers.

The grounds appear well kept to a casual visitor. To one funeral home director, however, who has been conducting funerals at Beth Israel for years, the facility shows signs of neglect.

“It’s just not what it used to be,” said the funeral director, who asked that his name not be used because he does business with the cemetery on a regular basis. “It’s not as pristine. The whole cemetery is not what it was.”

For more than half a century after its founding, Beth Israel was the keystone of what grew into a family-owned cemetery mini-empire. Isidore Shipper, a Jewish businessman, gained control of the cemetery shortly after it was created, according to David Shipper, his grandson. David himself started working there when he graduated from college, in 1978. The Shippers began to expand their operations to a handful of other East Coast cemeteries in the 1980s, using the same sort of corporate structure StoneMor uses now to control Beth Israel. The Shippers bought up the debt of not-for-profit cemeteries, allowing them to take control of those cemeteries’ boards. In at least one of the instances, the Shippers then hired a firm they owned to manage the properties, charging management fees to the boards they controlled.

In 1995 the Shippers sold their operation to the Canada-based Loewen Group, then a massive and fast-growing cemetery corporation that owned funeral homes and cemeteries across North America. David Shipper; his father, Irwin Shipper, and Aaron Shipper a cousin, all took positions as vice presidents at Loewen and went on to become major figures in the corporate cemetery industry. Irwin Shipper was elected president of a national death care trade association in 1996. He also served as president of the New Jersey Cemetery Board, the state cemetery regulator. David Shipper also served on the regulatory board and led the same death care trade association.

“The Cemetery Board opposes all management agreements designed to divert all or part of the control of the cemetery from the not-for-profit board into the hands of a for-profit organization,” the cemetery board wrote.

Loewen sued state regulators after an effort to enforce this policy against a cemetery that Loewen had bought from the Shippers. Courts found against Loewen, upholding the regulation.

New Jersey’s cemetery board, which Irwin Shipper chaired from 1972 until 1994, made no such regulatory effort. Efforts to reach Irwin Shipper for this story were unsuccessful.

After Loewen declared bankruptcy in 1999, some of its cemeteries, including Beth Israel, ended up with StoneMor, a publicly traded firm headed by former Loewen executives. Based in Levittown, Pa., the company owns 253 cemeteries and 69 funeral homes across the United States. The vast majority of these facilities are not Jewish.

The Levittown office of StoneMor is also the address of Beth Israel Cemetery Association, the not-for-profit corporation that owns Beth Israel Cemetery, according to the organization’s latest public tax filing with the IRS. Beth Israel’s board members, as listed in that 2010 filing, are all current and former StoneMor employees and executives.

In a 2011 filing with the SEC, StoneMor wrote that its deals with the not-for-profit cemeteries “provide us with management or operating fees that approximate what we would earn if we owned those cemeteries and held them in for-profit entities.”

Those management fees make up a small portion of Beth Israel’s expenditures. The cemetery spent $60 million over that six-year period, including $15 million marked in its IRS filings as “other salaries and wages.”

The Beth Israel board’s practice of paying fees that resemble profits to a company that in turn pays salaries to members of its board could conflict with tax rules barring not-for-profit insiders from unreasonably profiting from their position, according to William Josephson, who ran the charities bureau in the office of the New York State Attorney General from 1999 to 2004. Beth Israel is not a 501(c)(3), the most common form of not-for-profit organization, but rather is organized under a related section of the federal tax code specifically applying to not-for-profit cemeteries. Josephson acknowledged that there’s little precedent for IRS enforcement action under that tax code section. Still, he said, in the case of Beth Israel, “the degree to which cash flows [to] foundation managers, directors and officers raises an issue in which the Internal Revenue Service should certainly be interested, let alone the New Jersey attorney general.”

StoneMor’s management of Beth Israel doesn’t appear to have resulted in higher costs for clients. An adult burial at the cemetery costs $1,625, according to a May 2011 pricing chart, roughly on par with other New Jersey Jewish cemeteries. Some worry about the future, however, and whether for-profit companies seeking to win profits out of not-for-profit cemeteries are failing to ensure the burial grounds’ long-term survival.

That concern was behind the New York cemetery board’s efforts in the late 1990s to ban the management agreements with for-profit companies. “The management agreement is a superfluous agreement which does not increase the maintenance or care of the cemetery,” said Richard Fishman, director of the New York State Department of State’s Division of Cemeteries. In the long term, Fishman said he had worried that the for-profits wouldn’t stand by the cemeteries. “If there is no more profit, why would you do it? Then these people would disappear and the cemetery would be left on the hook,” Fishman said.

Cemetery reform advocates in New Jersey say that they hope reform of the state’s cemetery regulation regime will bring New Jersey in line with New York in areas such as management fees.

“We want the nonprofit cemeteries to make enough money to maintain themselves and to pay the people who work there, obviously,” said Weinberg, the state lawmaker. She said that the amount Beth Israel had paid in management fees was “quite phenomenal.”

Weinberg said that her cemetery reform bills would be considered in a state senate committee beginning on December 17.

“Our main goal has always been to find a way for the state of New Jersey to regulate cemeteries the way New York State does,” said Rabbi Shammai Engelmayer, a former president of the North Jersey Board of Rabbis who has been engaged in the board’s cemetery reform efforts. “This legislation at least helps try to rein that in a little bit.”

Cemetery officials, on the other hand, say that the business is harder than it looks. David Shipper, who now owns dozens of cemeteries and funeral homes as president and CEO of Midwest Memorial Group and Indiana Memorial Group, among other firms, said that people don’t appreciate the costs involved. “When a backhoe costs $80,000 and the tent and chairs cost $8,000, it’s a tough business and people don’t understand what it costs to be ready for an interment, especially a Jewish interment,” Shipper said.

Plenty of Money Made at ‘Not-for-Profit’ Cemetery