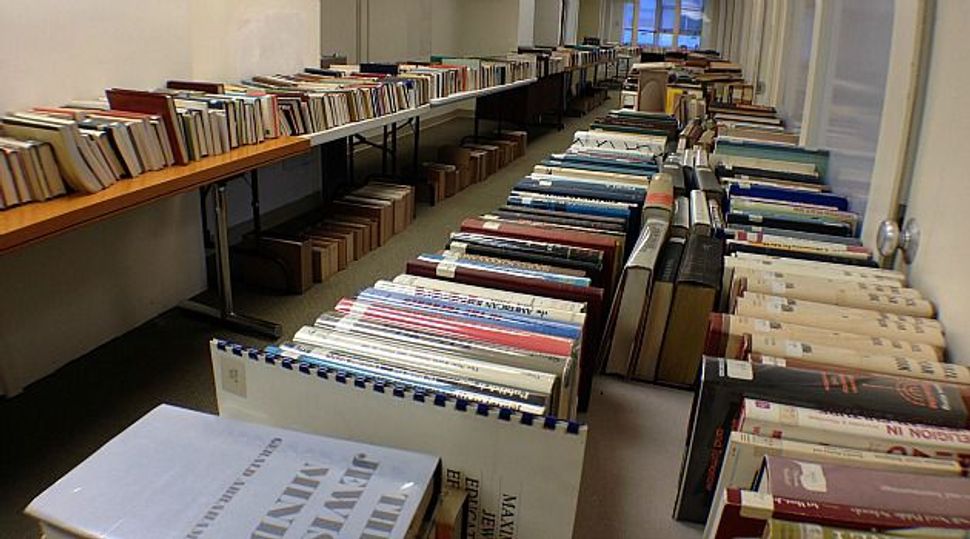 Changing Focus: The American Jewish Committee is moving away from research and domestic advocacy. Part of the plan involved phasing out its famed library. Image by getty images

The century-old American Jewish Committee is cutting back on its domestic political agenda and on its research functions in favor of a focus on international advocacy.

That shift follows a strategic plan that the AJC approved in 2009. Though the changes at the AJC have been broadly noted, the content of the blueprint itself — which the AJC shared with and described to the Forward — was previously unreported.

Once known for its civil rights work, its scholarly conferences and its original research, the AJC has consolidated and reorganized its activities, trimming old programs in favor of global advocacy efforts, often in support of Israel. Old areas of interest, such as the church-state divide, are being set aside. Founded in 1906, the group faces diminishing financial resources and increased competition from newer Jewish organizations.

“There are some things that we’ve done and we do that are not core, and we have to cut down and train a laser focus on things we do uniquely and best,” said Victoria Schonfeld, the AJC’s chief operating officer, who was brought on to lead and implement the group’s strategic plan.

The realignment has led to some turmoil within the ranks of the legacy Jewish organization. “Just because some elder members and former leaders of the agency wish to see the agenda more in line with what it was years ago doesn’t mean that that’s the appropriate agenda for this day and age,” said E. Robert Goodkind, a former president and current board member of the AJC, defending the changes. “Every agency, just like human beings, has to evolve and change, and that’s what AJC is doing.”

The AJC’s strategic plan came at a time when other Jewish organizations of a similar vintage were struggling. The American Jewish Congress, founded in 1918 as an alternative to the AJC, closed in 2010, after the Bernard Madoff scandal. The Zionist Organization of America, founded in 1897, lost its tax-exempt status this year, amid a growing organizational crisis.

David Harris, the AJC’s executive director, has shaped and led the group since he took his post, in 1990. Writing and speaking publicly, he is undoubtedly the face of the AJC. His influence and interests have been broadly felt throughout the organization. The roadmap, however, was not Harris’s alone. That process was led by Schonfeld, who was hired explicitly to head up the effort.

When Schonfeld arrived, the AJC was facing some disarray. Schonfeld said that the AJC lacked information technology capabilities and key staff positions, such as a head of human resources.

“The AJC had grown very quickly and hasn’t had time to focus on its infrastructure,” Schonfeld said.

When Schonfeld came on, in June 2007, AJC was in the midst of a financial boon. The group reported $123 million in assets with $53 million in contributions during the fiscal year that ended in mid-2007.

When she first arrived, Schonfeld said, the question was, “Where do we expand?”

By 2010, the group brought in just $38 million in contributions. Net assets were down to $99 million. The change in the organization’s fiscal situation became clear only partway through the strategic planning process, Schonfeld said.

The AJC’s board adopted the new plan in 2009. The plan identifies two core focus areas for the group: advocating with governments, and intergroup relations.

Intergroup relations refers to coalition building with other religious groups and other ethnic groups, according to Schonfeld, who referenced recent AJC outreach to Latinos as an example of this work.

But it’s the government advocacy, and particularly advocacy with foreign governments, that’s now clearly at the forefront of the AJC’s activities. Schonfeld said that the staff dedicated to global advocacy in the AJC’s national office is far bigger than the staff dedicated to intergroup relations. “It’s what we do more uniquely than anyone else,” Schonfeld said. “We have what we think is a unique style, which isn’t just marching in and pounding the table and saying you must listen to us; rather, our advocacy is building on long-standing relationships of trust.”

The global advocacy effort has become the organization’s trademark. The AJC’s tagline, which appears at the top of the group’s website and on official materials, reads “Global Jewish Advocacy.” The group has staff in nine foreign countries, including Brazil and India.

It’s a different model from groups like the American Israel Public Affairs Committee, which focuses on outreach to American legislators, and The Israel Project, which focuses on outreach to the media. The AJC has the added benefit of shoulder rubbing, which some outsiders suggest has proved a fundraising boon to Harris. “David Harris had spent many, many years abroad, and many of the leaders of AJC took great excitement from the opportunity to meet world leaders, and that’s the direction they moved,” said Jonathan Sarna, a Brandeis University professor of American Jewish history. Sarna said that he regretted what he saw as the AJC moving away from its role as a convener of a broad spectrum of Jewish thinkers.

Besides an affirmation of the AJC’s new focus, the strategic plan also brought cuts. The AJC closed its library, ceased publishing the American Jewish Yearbook and trimmed staff to 227 people today from 245 people in 2008, according to Schonfeld.

The AJC has also limited the range of issues in which it will engage. Each year, Harris now identifies a small number of priorities that are approved by the group’s executive committee and serve to steer the entire organization’s efforts over the following 12 months. Some issues receive less emphasis than they may have in the past. As examples, Schonfeld offered gun control and the separation between church as state as areas to which the AJC could no longer afford to devote resources.

“Whether or not gun control is a good thing — and I think it is a good thing — it’s not something that the AJC,” adds value, Schonfeld said. Of church-and-state issues, Schonfeld said: “You get dragged down a very long rabbit hole if you get into all the church-state issues. We want to be mindful of our resources and the priorities we [identified] at the beginning of the year.”

The AJC has worked for decades on church-state issues, filing amicus briefs on high-profile cases with the Supreme Court, and backing a law that exempts houses of worship from zoning rules, among other efforts.

Schonfeld noted that the group had made a recent statement supporting same-sex marriage. “We couldn’t ignore it,” she said, allowing that the line between what the organization will and won’t take on remains blurry.

As the AJC has pulled back on certain domestic issues, the public face of the organization has turned more and more toward Israel. The AJC chose four priorities to focus on at the beginning of this year; three of them — Iran’s nuclear ambitions, Israeli security and energy security — relate directly or indirectly to Israel.

Schonfeld said that this year’s Israel focus is not predetermined, but driven by events. “This year, [Israel] is the majority of our work, but it depends on what’s happening in the world,” Schonfeld said. “There’s some very key crises now. That’s why the focus is there. It really depends on where the most critical issues are.”

Harris also writes on Israel in a blog for The Jerusalem Post, the right-leaning English-language Israeli newspaper. In a February 2012 column warning of the threat posed by Iran, Harris implicitly criticized American Jews who are overly universalistic in their outlook, writing of a “Jewish campus center I recently saw that boasts exactly one advocacy sign — ‘Save Darfur.’ I assure you, space is not the issue should anyone wish to put up a second sign, ‘Stop Iran.’ Clearly, a lack of interest is.”

That attitude is not necessarily in line with the organization’s historical trajectory. “[The AJC] made a very deliberate shift after World War II from being solely concerned with Jewish matters,” said Marianne R. Sanua, a professor of Jewish history at Florida Atlantic University who wrote a book on the AJC. “After World War II they would work for the rights of everybody,” Sanua said, noting that the organization began moving back in the opposite direction after the 1967 Six Day War.

“It did used to be the think tank of the American Jewish people,” Sanua said of the AJC. “There’s limited resources now, and limited people, and the AJC wanted to concentrate on the things that it does best.”

Some Jewish academics have lamented the cuts to the AJC’s research programs. “Historically, the American Jewish Committee has played a vital role in promoting smart reflections on the major issues of the day in Jewish life and in America,” said Steven M. Cohen, a prominent sociologist of American Jewish life. “The sharpened focus of the AJC means that it may no longer be playing as vital a role in these critical areas that have meant so much to American Jewry.”