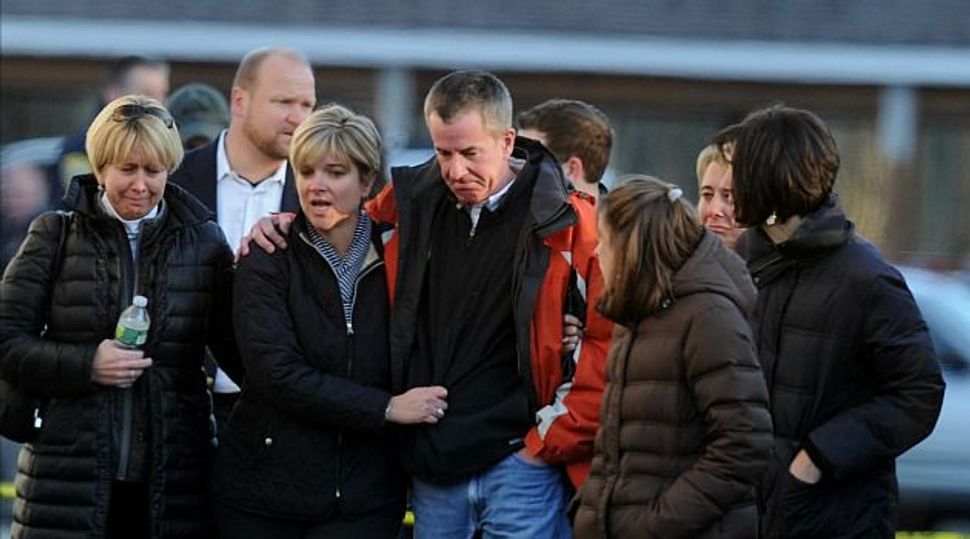 Rabbi Shaul Praver of the local congregation Adath Israel was among the leaders in Newtown, Conn., who rushed to console victims of one of the deadliest mass shooting in U.S. history.

Praver rushed to console families and children gathered at the city’s firehouse hours after the school shooting, which left 27 dead including the suspect.

Many of those attending were parents whose children had been killed in the attack or who were still waiting to hear word about their condition after being taken to the hospital.

“What you have to do is hug them and just be with them and cry with them,” Rabbi Praver told CNN in a phone interview from the firehouse. “There’s no theological answer to this.”

Asked whether there were members of his congregation among those impacted by the attack, Rabbi Praver said he fears for the life of one child who has yet to be accounted for.

“As we light candles for the seventh night of Hanukkah and for Shabbat, our hearts are heavy with the tragic news,” Shelly Katz, the executive director of the Jewish Federation of Western Connecticut, headquartered in neighboring Southbury, wrote in a letter to the local community.

Sen. Joe Lieberman (I-Conn.)said he and his wife, Hadassah, were “shocked and heartbroken” by the rampage.

In a statement, Lieberman said he and his wife “know this community and its people well. It is a beautiful town with wonderful people. As parents and grandparents, our hearts grieve for them today, and we send our prayers to each of them.”

The Reform movement issued a statement saying it was “deeply saddened by the tragedy. It pointed out that the gun used by the killer would have been banned under the expired Assault Weapons Ban.

“This horror reinforces the need to ensure that common-sense gun control laws are in place to help reduce these incidents,” said Rachel Laser, Deputy Director of the Religious Action Center of Reform Judaism.

In nearby Ridgefield, Conn., Rabbi Eric Eisenkramer told the Huffington Post that his congregation at Temple Shearith Israel will dedicate memorial prayers Friday night to victims.

“Right now, we pray for healing. Healing of those families who lost loved ones and those who lost children. And we pray for healing in our world of these kinds of tragedies,” he said. “Our memorial tonight will be for all of those who are lost, to remember them, but it is also Hanukkah, and we will light a menorah. It’s a symbol of light and hope for the future.”