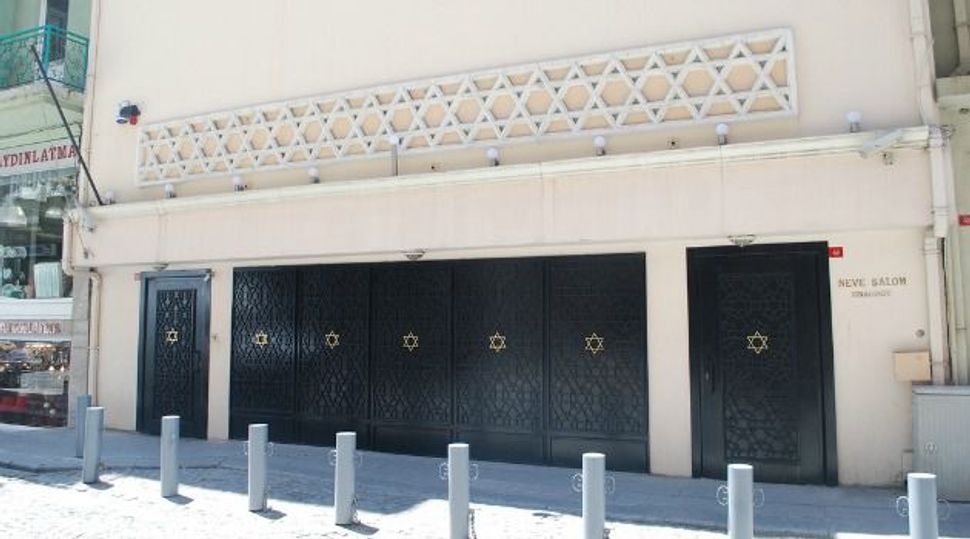 Worship: Neve Shalom is one of the rare synagogues in Turkey still in regular use. Image by Chadica/Wikimedia Commons

Leon Elnekave, the affable leader of the dwindling Jewish community of Bursa, Turkey’s old Ottoman capital, met my wife and me on a narrow, cobbled lane and unlocked the black wrought iron gate to the 500-year-old Gerush Synagogue. As he led us into the landscaped courtyard, my wife, Sallie, suddenly began to cry. “I don’t know what it is,” she said, “but I feel like I’ve been here before.” An odd reaction, I thought to myself, for an American woman who converted to Judaism from Presbyterianism in middle age. But immersing yourself in a mystical place like this can provoke unexpected emotions.

My own motivation for the visit was more pedestrian than spiritual: I had a suburban, white-bread, Ashkenazi curiosity about our Sephardic cousins and their exotic history. Not that we overlooked any of the great wonders of Istanbul and Turkey — the Hagia Sophia and the Blue Mosque, the Bosphorus, the Roman ruins at Ephesus and the cave churches of Cappadocia. Yet in the end it was this Jewish dimension to our itinerary — more than a dozen synagogues in three cities — that enriched and defined our trip last May.

Some years ago, while in Britain, I heard about a book called “The Guide to the Locked Churches of England,” a literary commentary on Europe’s declining worship. A similar book could be written about the synagogues of Turkey. Once there were hundreds of vibrant congregations made up of Jewish goldsmiths, copper and leather workers, commercial traders and diplomats. Today, many of the synagogues are empty, accessible only by appointment with a caretaker.

Turkey’s Jewish population (between 24,000 and 26,000 people) is slowly diminishing as the younger generation moves to the United States, Israel, Europe and Australia. The ruling Islamist government’s shift away from secularism over the past decade has made life uncomfortable, several Jews told me. Another factor accelerating the decline is spillover from Turkey’s diplomatic break with Israel in 2010. That year, eight Turkish nationals and a Turk with a U.S. passport were killed in a clash with the Israeli military on a flotilla bound for Gaza. The event led to some anti-Semitic incidents in Istanbul and other cities.

Even so, Jewish life still exists in Turkey. At least as meaningful as our synagogue visits were our encounters with the Jews who showed us around and with the others we met at the three Sabbath services we attended, whose homes we visited and whose meals we shared.

After making security arrangements (see italicized information below), we attended Friday night services at Bet Israel Synagogue in the fashionable Sisli neighborhood, where many Jews live. On Saturday morning we visited Neve Shalom Synagogue, where most of Istanbul’s Jewish communal events, such as weddings, b’nei mitzvot and brit milah, are held. Unlike many of the older sanctuaries, which are built with the pulpit in the center in the traditional Orthodox style, both of these have rows of pews that face front. The two congregations, both founded in the 20th century, have been targets of horrific terrorist attacks. In 1986, 22 morning Sabbath worshipers were gunned down at Neve Shalom by the Palestinian Abu Nidal Organization suicide attackers; in 2003, 20 people were killed in multiple bombings at Neve Shalom and Bet Israel.

Visiting Neve Shalom we saw numerous reminders of the 1986 attack: bullet holes at the base of the black, wrought iron railing around the bimah; a seared marble panel left in the wall near the ark, and a memorial plaque in the lobby. But our hosts there — as elsewhere — also pointed out the menorahs, Torah finials and spice boxes topped with silver and brass crescents and stars, the Turkish national symbol, in gratitude for their hosts’ tolerance and hospitality.

After a spirited Sephardic service, we were invited to a Kiddush luncheon at Neve Shalom’s social hall, where we feasted on local cuisine — including lox — and got a spontaneous lesson on the history and state of the Istanbul Jewish community by some of its most prominent members.

Our next stop was the Ahrida Synagogue, built in 1460 and named for its founders’ home village in Macedonia. The building is tucked away in the warrens of Istanbul’s Balat section; our taxi driver had to stop four times for directions, and even then he mistakenly drove us to an Orthodox Church, St. Stephen of the Bulgars. Ten minutes late for our appointment, we rang the bell at the synagogue gate, and then pounded on the door, but no one answered. The cranky caretaker, we later figured out, had been watching us from the street without identifying herself. Two days later, we had better luck when we started out earlier and joined several guided groups.

Once we made it to the synagogue, we eavesdropped on tour guide Erol Mofola’s excellent commentary and marveled at the marble floor, tiled walls and the famous wooden bimah in the shape of a ship’s prow — either a reference to Noah’s Ark (said to have landed on Turkey’s Mt. Ararat) or, more likely, to the ships that brought many members of the community from Spain. The community’s folklore includes fanciful tales of desperate Jewish refugees from the Spanish Inquisition being rescued from Andalusian beaches by a daring Ottoman admiral. One of the things that Erol did not mention was that this was the only Turkish synagogue that allowed the preaching of Sabbetai Zvi, the infamous 17th-century false messiah who later converted to Islam to save his life.

Guided Jewish heritage tours can be pricy — up to $300 per person per day. At a much lower price, we made an exception to our no-guides policy when we flew from Istanbul to Izmir, Turkey’s third-largest city, once called Smyrna, on the east coast. We contacted a leading member of the Jewish community, Rozet Alaluf, who sometimes escorts visitors. At first, she was reluctant to accept us without references, but then she relented to our pleading. A community matriarch who donates her fee to the Jewish establishment, Rozet embraced us like a solicitous grandmother and even scolded us for staying in the wrong part of town — a district the Jews long ago abandoned after improving their status.

Our first stop was the Street of Synagogues, a narrow, winding lane that is home to six to eight synagogues, depending on whether you count several burnt-out ruins, most dating back 300 years or more. In keeping with kabbalist tradition, brought from Tzfat, as well as Muslim custom, most of their interiors are blue. The synagogues usually featured a central dome, supported by wooden columns, with tiled walls and floors covered with rugs and stone benches dotted with pillows along the walls. By Ottoman decree, none of the hundreds of synagogues built in Turkey could be taller than any mosque.

One of those on the Street of Synagogues is La Signora Synagogue, which was remodeled after the fire of 1941. It is believed to be one of the few congregations in the world named for a woman, the 16th-century philanthropist Doña Gracia Nasi.

Across town, near the harbor, Rozet accompanied us by taxi to the early 20th-century Bet Israel, where an octagonal central dome and wooden pillar support an upper gallery that is home to a small but well-designed museum. Like Neve Shalom in Istanbul, it hosts major services and social events. Here, as at every other Izmir synagogue we went to, there was a plaque honoring some member of Rozet’s extended family, the Alalufs. At each synagogue, she sternly reminded us to leave at least a small donation to help with maintenance.

Not far from Izmir are the Roman ruins at Ephesus, where a crude menorah can be seen carved into the stone steps of the library, and one of the buildings nearby is thought to be a synagogue. An hour’s drive in another direction, at Sardis, are the restored ruins of a 3rd-century B.C.E. synagogue — including a mosaic floor, Greek and Hebrew inscriptions and a pulpit flanked by Roman eagles.

Through the Turkish Jewish Community office, we arranged to meet local caretaker Leon Elnekave and visit Bursa, a city of two million, across the Sea of Marmara from Istanbul. Leon unlocked the city’s two surviving synagogues, Gerush and Mayor. In addition to Turkish and Ladino, Leon speaks Spanish and Hebrew, so we were able to communicate. He briefed us on the city’s Jewish history, dating back to the early 14th century, when the Ottomans captured it from the Byzantines and gave the Jews there permission to rebuild their synagogue in what would become their quarter.

Gerush Synagogue was established in 1494, and survived the city’s catastrophic earthquake of 1855 with the loss of just a few of its red roof tiles. From the central dome hangs a crystal chandelier that lights the bimah. In a small side room are ancient texts in Hebrew, Spanish and Ladino, and pottery and delicate silk embroidery done by women of the congregation.

At both Gerush and up the lane at the Mayor Synagogue, founded by immigrants from the island of Mayorca, there is a unique architectural flourish: Above the back entrance to the sanctuary is a small, narrow balcony — a pulpit in the air — flanked by two narrow stairways. The balcony, which extends, tongue-like, from the wall, is used only on High Holy Days and special occasions.

Gerush hosts services only occasionally, and at Mayor, the only ritual observed is the washing of the dead. In any event, there are just a handful of older Jews left in Bursa; even Leon’s own son has migrated to Israel. He fears that soon — in spite of 2,500 years of tolerance and hospitality — there may be no Jews left.

Longtime religion writer Mark I. Pinsky is the author of “A Jew Among the Evangelicals: A Guide for the Perplexed” (Westminster John Knox, 2006).

Security is a serious issue with Turkish synagogues, so there are no spontaneous visits. Well before you go, you (or your tour company) need to contact the Turkish Jewish Community ([email protected] or [email protected]), fill out and return a security form, send a photocopy of the front page of your passport and wait for a response. When you arrive, make appointments for each visit or service. Hospitality does tend to be spontaneous and spur-of-the-moment. There are numerous Jewish heritage tours in Istanbul and Izmir, although fewer than before the Gaza flotilla incident and the U.S. recession, which impacted American Jewish tourism. We regretted missing the highly regarded Ottoman-Turkish Sephardic Culture Research Center, which is not far from the Ahrida Synagogue in Istanbul.