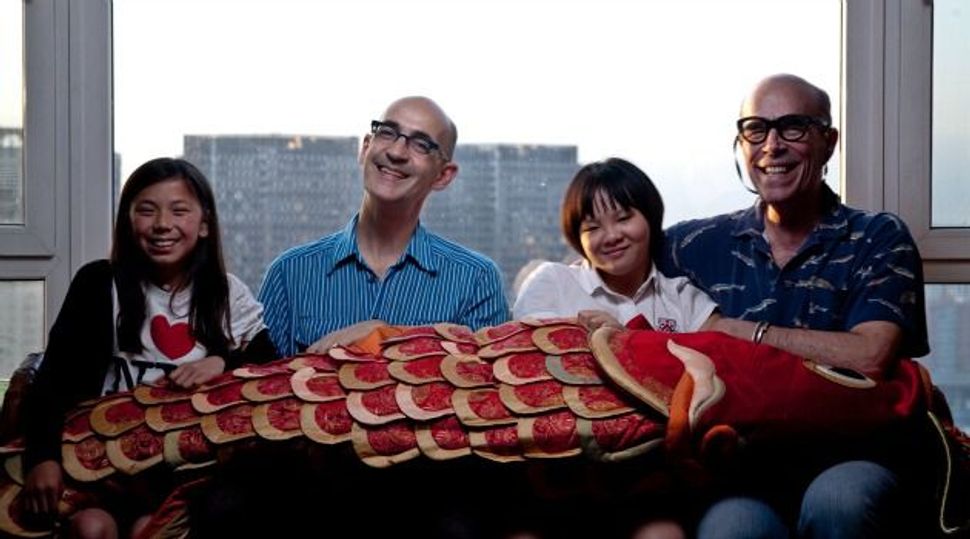 Family Time: Julian Grant (second from left, with partner Peter Lighte) says that his family minted their own ?Sino Judaica? with the bat mitzvahs of their daughters Tillie (far left) and Hattie. Image by Ray Deng

Most people don’t know what to picture when I tell them that I was very active in the Beijing Jewish community when I lived in China from 2006 to 2010. They can’t seem to envision what Jewish-in-China looks like. Is it a minyan of all Chinese Jews? A Chabad rabbi wrangling businessmen and college kids together for a free Sabbath meal and shots of schnapps?

Beijing is a unique outpost. There, the liberal Kehillat Beijing community has been around since 1979, more than two decades before Chabad arrived. Kehillat Beijing is a diverse community of expats from all over the world. Some families have Chinese members, too. Its egalitarian services mean that a girl can read from the Torah, but its lay-led organization means there isn’t a rabbi to teach her.

That’s how I became the Bat Mitzvah Tutor of Beijing. My four years in China overlapped with the bat mitzvahs of five amazing young women who for one reason or another were living in Beijing as they came of age. I am so proud to have taught them to lead services and chant their Torah and haftorah portions.

Each of their families had a different story for why they came to Beijing. The Lindheimers came from Seattle when father David was doing a stint in Microsoft’s Beijing office. Sisters Mia and Sophie have a lot of energy. During the Beijing Paralympic Games we went together to see track and field events in the Bird’s Nest Olympic Stadium. Our faces adorned with heart-shaped American flag stickers, we snuck down to the lowest level with a giant flag in tow. But by the end of the night, the girls were leading the local fans in “Let’s go, China!” cheers in Mandarin.

Their few years in Beijing were a great family adventure, capped by a joint bat mitzvah with a nighttime party at the Wall. Not the Kotel — the Great Wall of China. Their mom, Lauren, spent months putting together the event, which included a cantor flown in from Philadelphia and a local Samba band.

The Lindheimers had attended Hebrew school in the States and had been to other bat mitzvahs at their synagogue back home. Iana Weingrad, who in February 2009 was the first of my students to ascend the bimah, didn’t have that reference point. The daughter of a Chinese Buddhist mother and an American Jewish father, she was born in Hong Kong and has lived in Beijing her whole life.

By the time of her bat mizvah, Iana was taller than I was, but I looked up to her in more ways than one. She was an incredibly diligent student and clearly valued her exposure to Jewish tradition. She told me that before her bat mitzvah, she said she was Jewish and also Buddhist, because much of her family is Buddhist. “But now I feel that I am more Jewish, because I have a better understanding of what it means to be Jewish,” she said. Her bat mitzvah was the first time her Hebrew name, Simma, was ever read aloud in a religious setting. She has continued to participate in the community as a Torah reader and a bat mitzvah tutor to others.

Another pair of sisters whom I taught over two consecutive years is Hattie and Tillie Lighte. They are both Chinese-born, adopted by fathers Peter Lighte and Julian Grant. Peter is a Jewish graduate of Bronx Science (like my mom), who after years of studying the Chinese classics at Princeton took an unlikely turn toward banking. His work for JP Morgan Chase took his family to London and Japan in the past, but this time he got to bring them to China.

“What’s so funny for me is that I’ve devoted most of my life to studying China,” Peter said, “and now Beijing will always be associated with our daughters’ bat mitzvahs. It just makes no sense, but perfect sense to us.”

Peter’s partner, Julian, is an accomplished opera composer from England, and he’s not Jewish. He told me that in certain ways, some of the biggest challenges of throwing two bat mitzvahs in two years were evaded by being in Beijing. “I think that it was already outlandish enough to have a bat mitzvah in Beijing, so the fact that we were a two-dad family hardly mattered,” Julian said. “If we had been in one of the bat mitzvah factories in New Jersey I think it would have been a bigger deal.”

Each girl’s bat mitzvah celebration was stunning. Hattie’s featured Chinese performances, including a “Bian Lian” or “face changing” artist who, in the traditional style of Chinese Sichuan opera, cycled through infinite expressions with a seamless flip of his mask. Tillie’s was held in a derelict Ming Buddhist temple, which was undergoing renovation and was filled with mud and dirt until it was magically transformed days before the affair. “It seemed to me we minted our own Sino-Judaica,” Julian said, “which I kind of rather liked.”

Now, all this must sound quite exciting and exotic. But when I talked to all of the young women after their bat mitzvahs, they independently agreed that the most challenging thing for each of them was just what you’d expect to hear from any student around the world: learning their parts in Hebrew and performing in front of the community.

Alison Klayman is a documentary filmmaker and journalist. Her debut feature film, “Ai Weiwei: Never Sorry,” about the dissident Chinese artist, is shortlisted for the Academy Awards “Best Documentary” category. She was on the 2012 Forward 50 list.