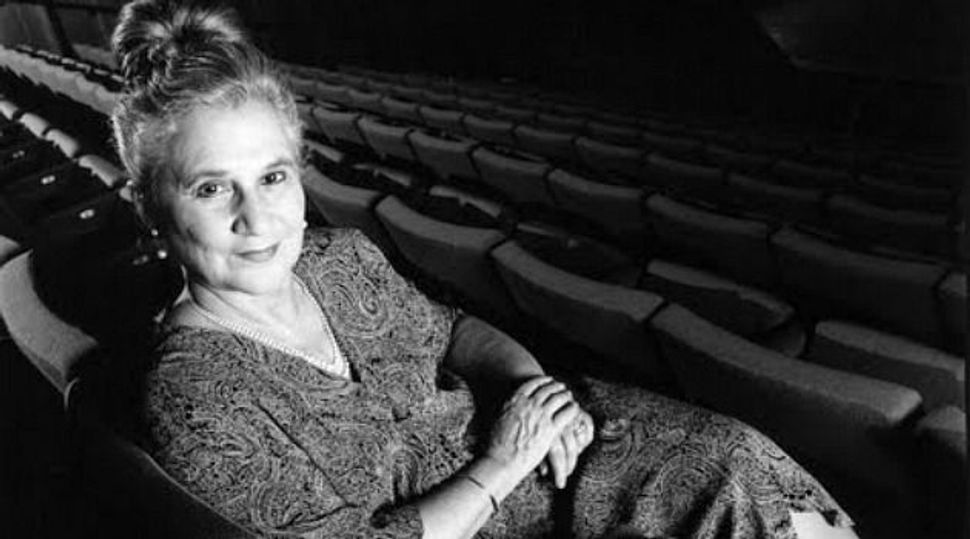 Beate Sirota Gordon, who at age 22 was responsible for enshrining equal rights for women in the post-World War II Japanese constitution, and then went on to found the award-winning performing arts programs of both the Japan Society and The Asia
Society, died peacefully in her sleep in her home in New York, surrounded by her family, the night before New Year’s eve.

Gordon, 89, succumbed to pancreatic cancer, barely four months after the death of her husband of 63 years, Joseph Gordon, who had also served on the post-war MacArthur commission as Chief of the Interpreter-Translator team for GHQ Military Intelligence Section.

I met Beate in 1987, when I paid a cold-call visit to The Asia Society to seek help after being invited to compose music for — and have my Ensemble perform this music at — the atom bomb commemorations in Hiroshima and Nagasaki in Japan, the first time an American composer had received such a solemn invitation from Japan. Although she had never heard of me, or of my Tibetan Singing Bowl Ensemble, which performs new music using traditional (mostly) Asian instruments in deliberately untraditional ways, she seized the opportunity and, without a moment’s hesitation, arranged for The Asia Society to co-sponsor the trip. And when, upon our return from the trip, she at last heard my music for the first time, Beate became one my most stalwart supporters and friends, involving her time, effort and moral support, attending and celebrating every subsequent performance and achievement. There are literally hundreds of performing artists, as diverse as Ohad Naharin, Yoko Ono, Eiko and Koma who have similar stories about her. We all became like family for her — her extended family: a realization, really, of her fervent belief in the power of the arts to generate understanding, respect and peace globally.

Endlessly curious to discover the new and the different, Beate was born in Vienna to an already international family. She was the daughter of noted pianist Leo Sirota, a Jew from the Ukraine who
trained in Kiev and St. Petersberg before settling in Vienna as a protegé of the remarkable Italian/German/Jewish composer/pianist Ferruccio Busoni. Her mother was the sister of Jascha Horenstein, one of the most esteemed conductors of the 20th century and a descendent of a rabbinical family.

In 1929, to get away from the rising tide of anti-Semitism in Europe, Leo Sirota accepted the invitation to become the head of the piano faculty of Imperial Academy of Music in Tokyo (now the Tokyo National University of Fine Arts and Music), and he brought his wife and young daughter with him. Rather than keep his daughter segregated, as most of the other westerners in Tokyo were doing, he insisted she play with the Japanese children and learn the language. At first she was sent to the German school in Tokyo. But, as that school became more Nazified and hostile to Jews, Beate was sent instead to the American school in Tokyo. Beate spent ten formative years growing up in Japan before leaving to go to Oakland, Calif. in 1939, at age sixteen, to attend Mills College. At Mills, she lived with a family friend on the music faculty there, the noted French/Jewish composer Darius Milhaud.

The 1941 bombing of Pearl Harbor by the Japanese stranded Beate on her own at Mills, with no possibility of communicating with her parents in Japan. She sometimes recounted her adventures as a college student during the war, as one of only a handful of Caucasians in the U.S. at the time fluent in Japanese, sometimes making U.S. propaganda radio programs to be broadcast to the Japanese soldiers, in a counter-offensive to the Japanese propaganda broadcasts by Tokyo Rose.

After the war, Beate was the first civilian woman to arrive in post-war Japan. desperate to find out whether her parents were alive or dead. She volunteered to help to rebuild the war-devastated Japan, which was the only way she would have been allowed to go there. Assigned to the Political Affairs staff, she worked for the Supreme Commander of the Allied Powers (SCAP) in Douglas MacArthur’s occupation army as a translator. Tokyo had been largely bombed out. Eventually she discovered and rescued her parents, who had survived, but in dire conditions in a detention center for foreigners far away from Tokyo. As bad as the conditions had been, they knew that if they had stayed in Vienna, they likely would have been murdered, which was the fate of other relatives who’d remained in Europe.

When the top-secret orders came that the Americans were going write the new constitution for Japan, 22-year-old Beate quickly realized no one at GHQ knew anything about writing constitutions. So she requisitioned a jeep, and traveled far and wide, to find surviving libraries to acquire a copy of every constitution from anywhere in the world she could find (in order to compare them and to get ideas of how to write one). So as not to reveal her purpose, she took care to maintain secrecy by simultaneously commandeering large numbers of books on multiple unrelated subjects.

Back at GHQ, she often joked, her collection of varied constitutions made her the most popular girl on the constitution-writing committee. In fact, she was the only woman in the GHQ Military Intelligence Interpreter-Translator Team. And she was fluent in English, German, French and Russian as well as Japanese. Her knowledge of Japanese was so fluent and idiomatic in fact, that, to everyone’s surprise, the Japanese also asked that she translate for them. Thus Beate was in the unusual position of translating for both sides in writing the new constitution.

Beate was given the task of writing the portions of the constitution on social welfare. From her experience growing up in Japan, she was adamant that women be given equality in the constitution itself. She knew that if it wasn’t enshrined in the constitution, women in Japan would languish as chattel, that the political processes, historically exclusively run by men, would inevitably vitiate or eliminate all rights for women. (A feminist avant la lettre, she often cited with a shudder the expression of “six steps behind,” the Japanese description of the proper traditional — and literal — position of women to men in Japan.)

Over the objections of the Japanese team that women’s rights were not even in the U.S. constitution, and without revealing Beate’s role as the writer of the clause, Colonel Kades, the military official in charge of this negotiation, shamed them into agreeing because “Beate has her heart set on it,” and how could they deny this one wish of the only woman in the room? On such moments is history made. (Beate kept her role secret until just recently. It was important that the Japanese believe the constitution was written by the Japanese themselves.)

Her efforts were not universally appreciated at GHQ, to put it mildly. Major General Willoughby raged against her, denouncing her as “a stateless Jewess who had hastily acquired citizenship, wielding the power of the United States and the prestige of General MacArthur” and warning that her parents represented a “Jewish clique,” and so on. His vehemently anti-semitic attacks were unsuccessful, however, only because he was unable to support them with sufficiently convincing evidence.

Her volunteer duties for MacArthur done, she returned to the U.S. bringing her parents with her. She took a number of jobs, including working at Time Magazine under its then-editor Whittaker Chambers. Later, when she became founder and director of the performing arts programs of both Japan Society and then The Asia Society, Beate produced 39 tours by 34 companies from 16 countries, performances seen by an estimated 1.5 million Americans in 42 states, 400 cities. She introduced to the U.S. literally every Asian performing artist who appeared here in the second half of the 20th century, and was renowned for going to great lengths to preserve and present as true a performance of the traditional arts of every Asian country as was possible.

The lengths she went to in these efforts in pursuit of authenticity were legendary, and only possible because of her profound personal cross-cultural understanding of the arts, which helped her transcend national boundaries. Attending her presentations from the most varied cultures was an irreducible education, for which, I, like many others, am personally and artistically indebted. One example, of which she was particularly proud was bringing dancers from Java to show the Bedoyo. This dance sounds simple when described in words as a phalanx formation of women who slowly shuffle onstage, and then gently undulate in unison, and then slowly shuffle off. But to witness it was one of the most astonishing things I’ve ever seen in my life. As Beate explained, for the Javanese, this was their representation of the wave-energy they believe to permeate the universe.

In November 1998 the Japanese government presented Beate with the Order of the Sacred Treasure, Gold Rays with Rosette. She also received an honorary Doctor of Law degree from Smith College in 2008, and in 2011 an honorary Ph.D. from her alma mater, Mills College — which is where her papers now reside.

Unlike most major figures in the arts I’ve known, who tend to repeat the same repertoire of stories over and over again, Beate always surprised me with different stories each time we got together. She had such a rich wealth of experience and acquaintance with the widest possible range of artists. But in the last part of her life, after the ban of secrecy was lifted, the one story which she did repeat many times — and rightly so — was of her role writing the Japanese constitution. If not for her, Japanese society today would be a very different place, especially for women. There have been several films and television programs made about this story. Japanese women understandably express gratitude for [“Beate’s Gift.”][11]

She is survived by her two children, Nicole and Geoffrey, and three grandchildren, Sam Gordon and Lara and Danielle Bernstein.