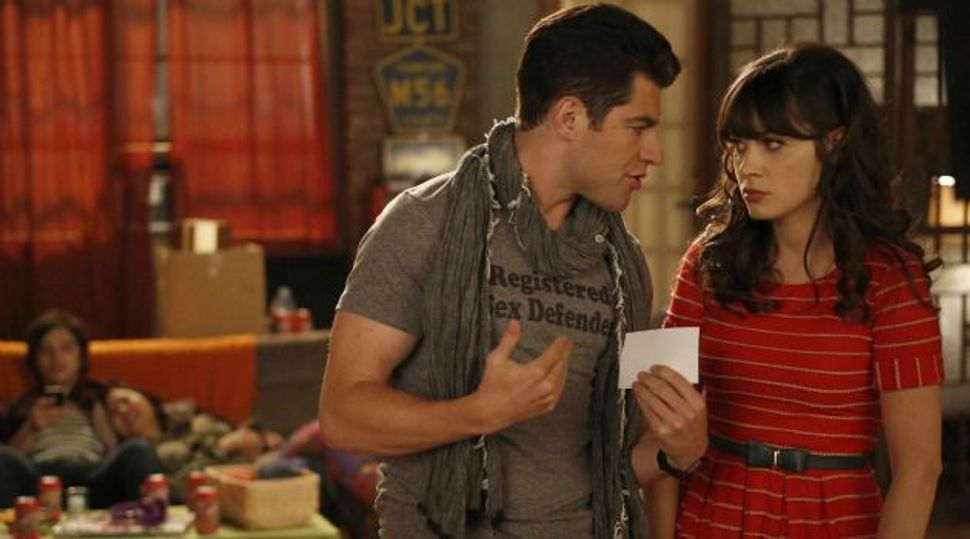 One of four main characters on the Fox sitcom “New Girl,” which is in the middle of its second season, Schmidt is the garrulous, metrosexual resident clown who is forced to put a dollar in the “douchebag jar” every time he says something uncouth. If he sounds like an unlikable punch line, well, it is because he should have been — “hair chutney,” driving moccasins and all. But instead he has flipped the whole kvetchy, desperate male Jewish character trope on its head, infusing it with generosity and warmth and attracting a whole lot of love for it.

Lena Dunham, creator of the HBO series “Girls,” told New York Magazine that Schmidt is the one character on TV she wished she had created: “He just tugs at every string I have.” And Gwyneth Paltrow called Max Greenfield, who plays Schmidt, her favorite actor on television and “the kind of guy you lusted after at your cousin’s bar mitzvah.”

Thirty-two-year-old Greenfield, who, according to an interview with GQ, had a “Saturday Night Live”-themed bar mitzvah, received an Emmy nomination last year for playing Schmidt, as well as a spot on People magazine’s list of the sexiest men of the year — no small feat for a schlemiel. And on January 13, Greenfield headed to the Golden Globes as a nominee in the supporting actor category. (The Forward went to print before the award winners were announced.) Not too nebbishy, eh?

“New Girl” is about the misadventures of four late-20-somethings who live in a loft in downtown Los Angeles. Schmidt, who works in marketing, is roommates with a quirky teacher named Jess, played by Zooey Deschanel; Nick, a grumpy bartender, and Winston, a dopey ex-basketball player who works in sports radio. Schmidt’s character serves as a vain and sometimes foolishly ambitious foil to the other characters’ Generation Y-esque uncertainty.

Now it isn’t as though Schmidt has nothing in common with his various fictional forerunners; he is an oversharing neurotic who can’t shake the feeling that he is stuck outside of where he wants to be. On a recent episode, he says that befriending musician Kanye West is his idea of making it — “the most efficient way for me to jump social strata.” He also pretends to be related to Mitt Romney in order to get into a nightclub.

But unlike the many Woody Allen-inspired characters that have come before him, Schmidt seems wholly immune to self-pity and doubt. Instead he maintains a strong commitment to self-betterment, physical and emotional. And he will do whatever it takes to help. What makes Schmidt so charming is that he convinces us that this self-betterment — his, his roommates’ and ours — is possible; he is a beacon of optimism in this age of detached irony. When the character Cece, a professional model and Jess’s best friend, falls for him, we totally buy it.

Schmidt’s backstory on the show is that he was Nick’s overweight, slightly desperate college friend who majored in marketing and theater studies. Fast-forward to present day, and Schmidt has washboard abs, which he displayed by dressing up for Halloween as a character from “Magic Mike” (a recent movie about male strippers), along with a closet filled with perfectly tailored suits. He loves cleanliness so much that he sometimes sneaks into the others’ bedrooms just to tidy up. Indeed, his concern for himself matches his concern for others.

Schmidt is not Jewish in the Jerry Seinfeld sense, in which it is inferred but never explicitly stated. Nor is he Jewish in the Larry David, Judd Apatow or Adam Sandler sense. For them, Judaism serves as a punch line at best, and at worst a source of self-hatred.

Nope, Schmidt loves being Jewish. He corrects someone for mistaking his Purim costume for a Halloween costume and calls himself the “Jewish Peter Pan.” He speaks tenderly about his zayde’s egg salad and kreplach. And during the recent Christmas episode, he tells his friends how hard it is for Jewish children to keep the truth about Santa to themselves; by the end of the episode, he expresses his need to stick with his people during the holiday season.

“I am so sick of hanging out with Christians. This is my last Christian Christmas,” he tells a car full of friends after they drunkenly convince themselves that the kind, African-American cop that pulled them over was actually Santa.

Another thing that sets apart Schmidt from his schlemiel forerunners is his happy embrace of his feminine side. Besides his love of grooming and emotional vulnerability, he understands that once women-only activities like cooking and chatting are what today can make a man.

Indeed, Schmidt’s feminine side has made him more adaptable in this economy, which, according to Hanna Rosin in her recent book, “The End of Men: And the Rise of Women,” favors typically feminine traits, like communicating and multitasking. Of the four roommates, Schmidt is the only one who seems to be going somewhere professionally.

Earlier this season he has a competition with his cousin for the exclusive usage of the nickname “Schmidt.” They begin with typical masculine stuff, like strength-testing exercises that give his ex-Marine cousin the advantage. But ultimately they end up in the kitchen, where Schmidt explains: “Your caveman ideas about manhood are so over. Manhood today is about exfoliation, and cheese courses, and emotional honesty and Paxil.”

Maybe his sensitivity and relentless caring have to do with the fact that Schmidt was raised by his mom, and, later, her female partner, while his dad went off and had three kids with another woman.

Previous memorable schlemiels, guys like Philip Roth’s Alexander Portnoy or Woody Allen’s Alvy Singer, have been characterized by their struggle with women, namely their mothers. But Schmidt is a guy who loves his Jewish mother just fine.

Elissa Strauss, a contributing editor to The Sisterhood blog, is a journalist living in Brooklyn.