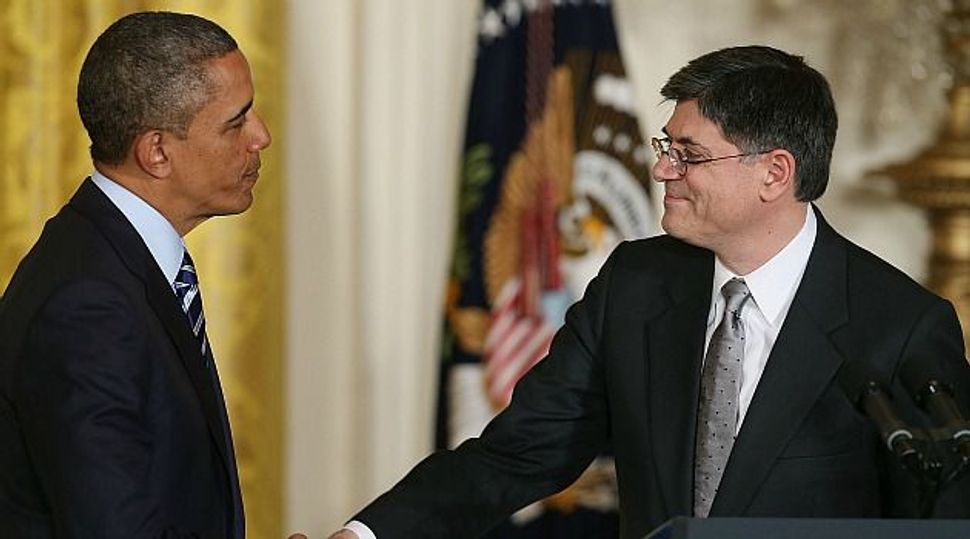 Will They or Won?t They: Jack Lew has been nominated as the next treasury secretary. Will he survive the Republicans? culture of no? Image by getty images

Jacob Lew helped Orthodox observance reach the highest precincts of governance. But can a man that Republicans say “can’t get to yes” be confirmed as secretary of the Treasury?

Lew is well known in Washington circles, but in some ways he is the polar opposite of Joe Lieberman, the former Connecticut senator and Democratic vice presidential nominee whose exuberant and public Jewish observance helped pave the way for Lew.

Lew has been in public view much less than Lieberman and has not aggressively promoted his observance, although Lew is happy to talk about how he balances it with public service in relatively confined Jewish settings.

He credits his bosses – Bill Clinton in the 1990s, when Lew headed the Office of Management and Budget, and Obama, under whom Lew has headed the OMB before becoming chief of staff – for their understanding.

“As a father who is at home and has dinner with his girls, he values that Shabbat is my time being with my family,” Lew told JTA in a pre-election interview, when he was stumping for the president. “I could not ask for someone to be more respectful and supportive, and that’s the reason it works.”

Such deference, coupled with a studiously low profile in Washington, has helped smooth his relationships. Until recently, Lew was a Washington rarity – a person who enjoyed admiration on both sides of the aisle.

That came to an abrupt end two years ago when Lew, in his OMB capacity, led the administration’s negotiations with Congress to rein in the deficit. The talks failed, and the GOP made Lew a bogeyman, saying he was too ideological.

Washington Post reporter Bob Woodward’s book about the talks, “The Price of Politics,” quoted Republicans as describing Lew as “disrespectful” and overly ideological in protecting entitlements. Woodward quotes House Speaker John Boehner (R-Ohio) as pleading with the White House to pull back Lew, saying he could not “get to yes.”

That reputation already has drawn a pledge to block Lew’s nomination even before Obama formally announced it. Sen. Jeff Sessions (R-Ala.) said in a statement Wednesday that Lew “must never be secretary of the Treasury.”

Those close to Lew inside and outside the White House say he is a “mensch” who frustrated Republicans with an encyclopedic command of facts that tended to undercut their arguments.

According to Woodward, Lew also was soured by what he saw as Republican disrespect for the president, particularly when Boehner reufsed for a time to take Obama’s calls.

Lew is fiercely loyal to his boss, and they enjoy a brotherly relationship, White House insiders say, pointing to Lew’s omnipresence in official White House photos. He is one of a small group seen praying with the president on the day of last month’s massacre of schoolchildren in Connecticut – a moment that Obama has described as the worst in his presidency.

Tevi Troy, an observant Jew who was deputy health secretary under President George W. Bush and who debated Lew during the election, said ideological differences should not undercut a nominee and that he hoped to see Lew confirmed.

“He is ideological and very committed to entitlements without full recognition of the fiscal challenges we face,” he said. “I hope as Treasury secretary he will come to some sort of agreement that will alleviate our dire fiscal situation.”

Otherwise, Troy said, he was a fan of Lew for raising the roofbeams for observant Jews.

“I’m a fan of people who balance religious observance and high-level government service,” Troy said. “It’s great that it shows that Jews at whatever observance level can serve at high levels of governments.”

Lew’s value is not just his example but also his advice, said Rabbi Levi Shemtov, the director of American Friends of Lubavitch, who often acts as an adviser to devout Jews in Washington seeking to balance observance and public service.

“Jack Lew does not only seek rabbinical advice, he sometimes helps dispense it,” Shemtov said.

Shemtov recalled having to consider a request from a congregant who was called in to government work urgently on a religious holiday. Lew happened to be in synagogue, and Shemtov was able to consult with someone familiar both with governance and halachah, or Jewish law.

“He’s able to give an inside view of the scale of urgency in a way that that can help rabbis and even communal leaders understand things more practically,” he said.

Jewish audiences thrill to such insights. Clevelanders attending a pre-election debate between Troy and Lew enjoyed their back and forth on Israel and domestic policy, but especially lit up when the two recalled their gentle explanations of observance to non-Jewish colleagues. Lew drew laughs when he recalled having to explain to congressional leaders that there was no need to suspend sessions for Chanukah – it was not a holiday requiring an absence from work.

“It was a policy debate, and it was important and it was serious,” said Nathan Diament, the Washington director of the Orthodox Union, who moderated the debate. “The closing discussion about his role as a Sabbath-observant Jew in the highest levels of government was both insightful and inspiring.”