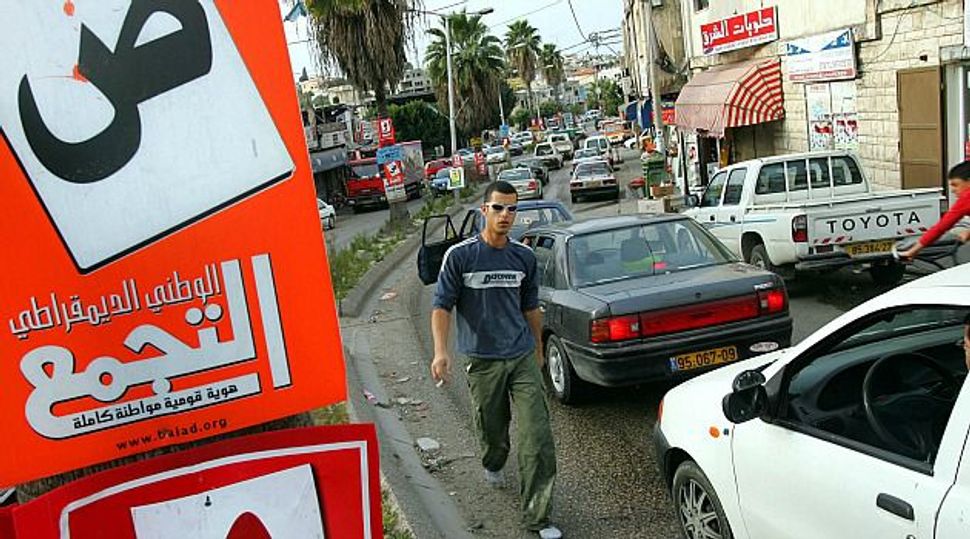 Arab Apathy: It?s election season in Israel. But many Arabs see little reason to vote, despite the prospect of an even more right-wing government. Image by getty images

“To whom are you leaving the country?” entreats one poster for Balad, an Arab party, showing a photo of Avigdor Lieberman, head of the Yisrael Beiteinu party. The party has proposed stripping Arabs of their voting rights if they refuse to pledge loyalty to Israel as a Jewish state.

But the pitch seems to be falling on deaf ears. Members of the country’s Arab minority are poised to stay home in record numbers in the country’s January 22 parliamentary election, according to recent polls. The phenomenon, if borne out in the election, would signal growing alienation among the one-fifth of the citizenry that is Arab. Analysts say it would also help perpetuate right-wing rule. Some critics of the trend say it raises tough questions about how democratic Israel is.

“‘People are in despair,” said Yusuf Khawish, a former high school psychology teacher in this town east of Hadera in northern Israel. “Their psychological situation doesn’t encourage voting. Who votes? Only he who thinks he can benefit.”

In a packed local shawarma shop where Quranic verses adorn the wall, Rami Sawaied, a 27-year-old lawyer, dismissed the election’s significance for himself and other Arabs as he munched on a sandwich during his lunch break.

“I am not going to vote. I don’t think that if I voted it would change anything,” he said.

Like many potential voters interviewed by the Forward in Arab areas of northern Israel, Sawaied perceives national politics as an Israeli Jewish game in which Arabs cannot be real players. They blame entrenched discriminatory attitudes. “This is a Jewish country, and they don’t give the Arab people a chance to live,” Sawaied said.

Another diner, Samir Auweisat, 34, said he would vote but did not believe it would make a difference. ‘’We can’t change the situation, because all the government is Jews,” said Auweisat, an Arabian horse trainer. “They won’t have [Arabs] in the [government] coalition.”

His point is a historically accurate one. Throughout Israel’s history, both left and right governments have shunned Arab parties, which oppose the Zionist conception of Israel, as coalition partners. Various ultra-Orthodox Jewish parties, which also oppose Zionism, have served frequently in Israeli governing coalitions. But the Arab parties have been viewed differently,

During the course of 32 governments, only one Muslim cabinet minister has ever been appointed — Ghaleb Majadale of the Labor Party, who was appointed Minister of Culture in 2007. And under Israel’s political system, it is from within the government, not the Knesset, that real power is wielded.

The burgeoning sense of nonbelonging was reinforced this past December, when the Central Elections Commission nullified the candidacy of Haneen Zoabi from the Arab nationalist Balad party. The Supreme Court overturned this decision 9–0, but Likud party legislator Danny Danon is vowing to introduce legislation to bypass the court ruling and prevent Zoabi from serving if she is re-elected.

Zoabi is reviled by right-wing Israelis for joining in 2010 with pro-Palestinian activists on the Turkish ship Mavi Marmara, which tried to break Israel’s long-running blockade on goods and materials entering Gaza. Israel imposed the blockade, which included heating fuel, many food goods and civilian essentials, in an effort to squeeze Hamas, the Palestinian faction that governs Gaza. The group has sponsored attacks on Israeli civilians and launched rockets from Gaza on Israel. But in Baqa, Zoabi’s banning was seen by many as anti-Arab and as an attack on Zoabi’s freedom of expression.

“She was banned because she speaks the reality, the truth about the situation of the people,” said Imad Mowasi, a local baklava seller.

Khawish, the former high school teacher, predicted that lingering anger over Zoabi’s aborted banning might push some to vote who otherwise would have stayed home — but not enough to significantly stem the tide of abstention.

The looming stay-away comes despite there being a great deal at stake for Arabs in the election. In late October, Prime Minister Benjamin Netanyahu of the ruling Likud party merged his party’s Knesset candidates list with that of Lieberman’s Yisrael Beiteinu, a faction in many ways to the right of the already right-wing Likud.

Yisrael Beiteinu, for example, advocates stripping Israeli citizenship from hundreds of thousands of Arabs who live near the so-called Green Line that separates Israel from the occupied West Bank and handing them and the land on which they reside over to be part of a Palestinian state as part of a peace agreement. In exchange, Israel would annex Jewish settlements in the West Bank.

But the sense of Arab alienation is economic as well as political. According to the Adva Center, a social affairs think-tank in Tel Aviv, 53% of Israeli Arabs live below the poverty line, compared with 14% of Israeli Jews. In Umm al-Fahm, a crowded, sprawling town near Baqa, residents singled out lack of land for housing as one of their most important problems, something for which they blame the zoning practices of the government.

“There is a lot of racism, in housing, in how you are treated in offices. There is no equality at all,’’ said Ahmad Mahajane, who works as a waiter in Tel Aviv.

The government says it is committed to reducing such social and economic inequalities. But few Israeli Arabs believe that whom they vote for will have any impact on their situation.

Alienation was not always this deep. Voter turnout among Israel’s Arab minority was 70% during the contest that brought Yitzhak Rabin of the Labor Party to power back in 1992. After the election, Rabin struck an alliance with Arab legislators who gave him a blocking majority of 61 seats in the 120-seat parliament. This kept his government from being toppled by the right as he pursued the Oslo peace agreement for Palestinian self-rule in the occupied territories.

Arab voter participation peaked at 75% during the election that brought Labor’s Ehud Barak to power in 1999. But the alliance between Arab politicians and the ruling Labor Party unraveled during Barak’s tenure, especially after the outbreak of the second intifada uprising in 2000 and the killing by security forces of 12 Arab citizens during protests.

In 2009, Arab turnout for parliamentary elections sank to an all-time low of 53%. A poll taken in October by the Abraham Fund, a group promoting coexistence, suggests it will tumble below 50% this time.

Mohammad Darawshe, co-director of the Abraham Fund, blamed both Jewish and Arab political leaders in Israel for Arab electoral alienation.

The political leaders of Labor and of Jewish centrist parties have failed to engage the Arab electorate during the current campaign, Darawshe said. And no mainstream party, he added, has committed itself to including Arab parties in its coalition should it come to power.

Labor Party officials declined to respond to this criticism. But Kassam Grifat, head of Arab affairs for the centrist HaTnua party, led by former foreign minister Tzipi Livni, said his faction was actively campaigning for Arab votes. Polls pointing to low turnout in this sector were due to “failed government policy,” he said, which HaTnua would reverse.

Darawshe cited findings in the Abraham Fund’s October survey to argue that Arab politicians were also failing Arab citizens. According to its findings, the Arab public wanted the three Arab-oriented parties in the Knesset to set aside their ideological and personal differences and run a united list emphasizing education, poverty and employment. But Balad and Hadash, the two secular Arab parties, and Ra’am Ta’al, whose orientation is Islamist, could not overcome their differences.

On this point, Sawaied’s views appear to agree with those of Danon, one of the Likud’s more aggressive right-wing lawmakers. “The main reason they don’t want to vote is that their leaders, instead of worrying about the public that elected them, chose to take care of enemies, and to board the Marmara and participate in incitement,” Danon said.

Yossi Sarid, who served as Rabin’s education minister, said that a very low Arab turnout would only help perpetuate right-wing rule by reducing the number of seats won by the left. And Darawshe warned that a further decline in Arab voters would have negative implications not just for Arab citizens, but also for the Israeli state as a whole. “A democracy that cannot create space for 20% of the population to find its political role is a failing democracy,” he said.

Some leading rightists feel quite differently. David Rotem, a legislator from Yisrael Beiteinu, said, “It is their problem how and what they vote. If they choose not to vote despite having the right to do so, then Israel is perfectly fine. It is no problem at all.”