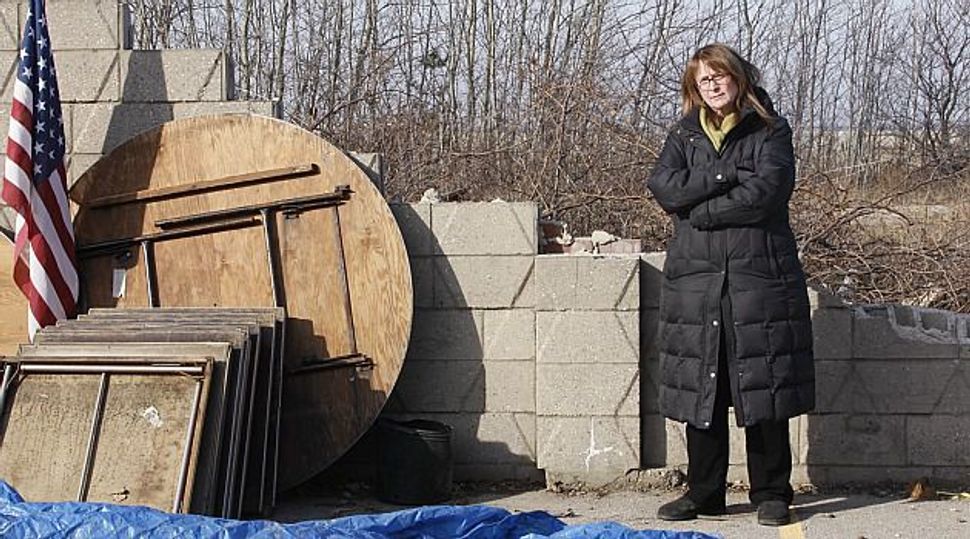 Storming: Rabbi Marjorie Slome of West End Temple in the Rockaways wonders if the synagogue will ever get help to repair damage caused by superstorm Sandy. Image by shulamit seidler-feller

The 112th Congress’s failure to bring emergency disaster aid for New York and New Jersey to a vote before adjourning has left scores of synagogues and other places of worship — not to mention thousands of businesses and homeowners — in limbo following Hurricane Sandy.

“The word ‘unconscionable’ comes to mind,” said Rabbi Scott Hoffman of South Merrick on Long Island. “It was put aside, delayed and placed on the back burner.” Days before the Senate approved $60.4 billion in Sandy supplemental aid — only to see the House of Representatives stall the legislation until it closed — departing Connecticut Senator Joe Lieberman prepared an amendment specifying that houses of worship were eligible to receive aid from the Federal Emergency Management Agency on the same basis as other not-for-profit institutions. But the proposal failed to advance when the Senate invoked cloture rules that barred amendments to the bill.

Meanwhile, houses of worship remain ineligible for aid under FEMA’s current rules because of concern that funding their reconstruction would violate the Constitution’s ban on direct government support of religion. Jewish organizations, such as the Union of Orthodox Jewish Congregations of America, have taken the lead in pushing the Department of Homeland Security to reconsider this prohibition.

The Forward has determined that 72 synagogues were significantly damaged by Sandy. On January 4, the new Congress passed a stopgap $9.7 billion supplemental aid bill for Sandy victims and is expected to approve another $50 billion by January 15 for homes and businesses damaged by last year’s October 29 hurricane. In 2005, it took Congress just 10 days to approve federal aid for Hurricane Katrina relief efforts.

Local religious leaders feel disillusioned by the lack of a decision on FEMA eligibility aid for their buildings, but also by Congress’s snail’s pace in acting to help their communities rebuild.

“Imagine those people whose houses are gone, who need the money to fix other things within the house and are waiting for federal monies — and now you push them off for another month?” said Steven Frohlich, president of Young Israel of Brighton Beach. “It’s terribly disappointing.”

Frohlich said his congregation was paying “an arm and a leg” for repairs to the synagogue building, but he was even more concerned about community members in need.

There are congregations that have estimated damages of more than $1 million, like West End Temple in Neponsit, N.Y.

“These are people that pay taxes and Congress’s salary, and now all these constituents are in need and they’re not coming through,” said Chabad of Oceanside’s Rabbi Levi Gurkov. “It’s heartbreaking. It boggles the mind.”

Hoffman said his synagogue, Temple Israel of South Merrick, sustained about $100,000 in damage.

Gurkov said he hasn’t yet received money from his insurance company for the estimated $500,000 of damage to his synagogue, because the company is waiting to see how much the government pays out.

Many Democrats agreed. They blamed the GOP-controlled House, which closed out the final days of its last session mired in a standoff with the White House on President Obama’s push for tax increases on the wealthy.

New Jersey Senator Frank Lautenberg called the House’s failure to act on the aid bill passed by the Senate “a new low for House Republicans.”

Business owners are also growing increasingly upset at Congress’s indecision on the matter.

“I am so furious, they’re absolutely clueless,” said Howie Brecher, a businessman from New Jersey.

For 26 years, Brecher has made his living on the Jersey Shore. He owns four souvenir and clothing shops on Long Beach Island, an 18-mile strip of six municipalities that are a favorite summer destination for tourists. After the storm, Brecher had to lay off his winter staff of about eight workers. He invited each employee to his house and helped him or her apply for unemployment, but he found even that process cumbersome.

“Half got turned down,” Brecher said. “They all applied at the same time. The bureaucracy is so inept.”

Brecher said he planned to open one of his four stores by mid-March and the last by mid-May. But, he said, the upcoming summer could be disastrous for businesses if the island is not cleaned up and fully operating.

Officials in Ship Bottom, a borough on Long Beach Island with more than 1,000 residents where one of Brecher’s shops is located, estimate that debris cleanup alone would cost $1.5 million. Additional work, including creating new dunes, retrofitting flooded generators and clearing storm drains, could cost hundreds of thousands of dollars more.

Richard Bethea, Ship Bottom’s administrator and finance officer, took exception to “pork” that he said was being tacked on to the aid bill — a charge also made by some GOP opponents of the bill. “There are things being spent that don’t belong there,” Bethea said. “It has to happen quickly. It’s important to everybody at all levels. If businesses are up and running, the government collects taxes.”

Brecher, who founded the Long Beach Island Business Alliance, said his discussions with mayors, city council members and other local businesses indicated “a real, real concern” that costs were becoming too large for the townships. Businesses, he said, were “spending with the assumption that FEMA’s going to reimburse them.” “All types of things haven’t occurred yet, and if they don’t have money for things like fixing storm sewers, if beaches aren’t cleaned up, people aren’t going to come down. They’ll think it’s unsafe, ugly, that utilities are not working right.”

The threat of new storms further complicates the cleanup efforts. Before the New Year, a winter storm hit Long Beach Island, causing areas that had just been cleaned to flood again. “Storm sewers were filled with debris and sand and are not draining right,” Brecher said. “We had 14 inches of water under our house.”

Instead of waiting months for the possibility of federal aid, local leaders elsewhere have taken a proactive approach to helping community businesses. Thirty-five miles north, in Lakewood, N.J., the Lakewood Development Corporation set aside $1.5 million for an emergency disaster recovery program for the downtown area’s mostly Jewish- and Latino-owned stores. Volunteers went door to door to survey the damage to local businesses and encouraged storeowners to apply.

“From our perspective, the point was to get the funds to those who were affected most so that they can get back on their feet quickly,” Rabbi Moshe Zev Weisberg, the development corporation’s chairman, wrote in an email to the Forward. “The small businesses we assisted were our friend[s] and neighbors, as well as our partners in a healthy local economy.”