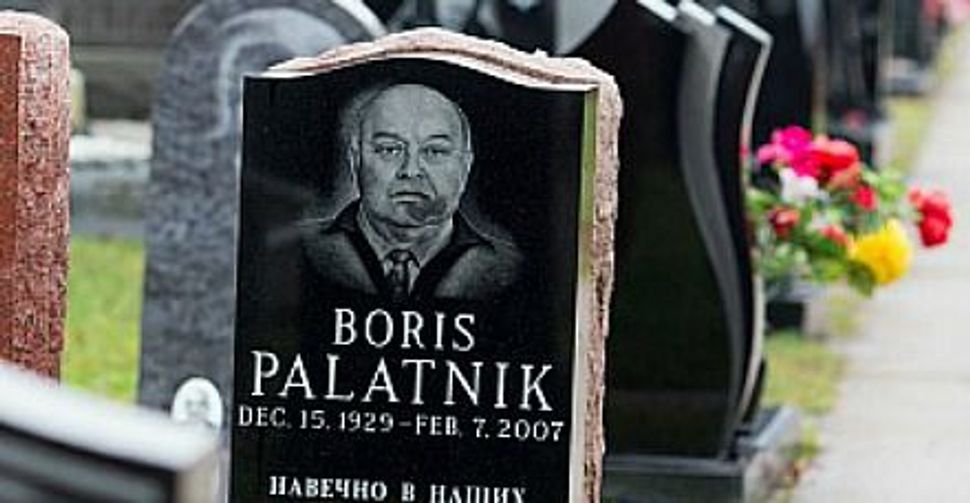 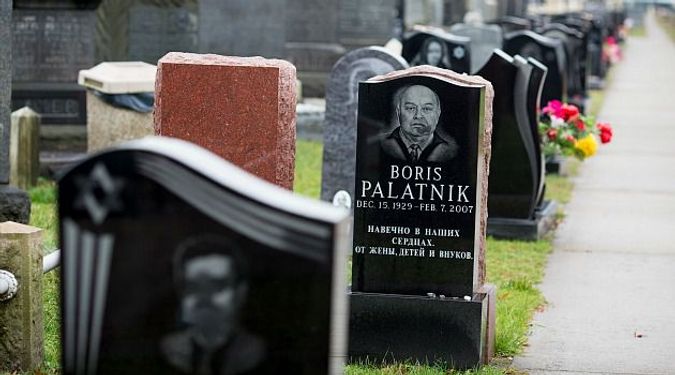 Soviet Chic: Jewish immigrants from the former Soviet Union brought a taste for gaudy laser-etched photos on ? of all places ? headstones. Image by claudio papapietro

How do you pick the life-sized photograph to have engraved with a laser on your father’s headstone?

Boris Shtern’s survivors chose a portrait of him with a moustache as thick as Groucho’s to go on his gravestone at Brooklyn’s Washington Cemetery. Yefiv Sheynin looks like a 1950s Vegas playboy in his portrait in granite. Boris Yanov, a few plots away, wears a Red Army uniform.

The three are part of a cultural revolution that has tossed aside decades of homogeneity in American Jewish headstones. Instead of identically cut granite slabs, Jews from the Former Soviet Union are picking flashy, highly polished black stones of varied sizes and shapes engraved with portraits of the departed.

“I tell them just give me a good-quality photo,” said Joel Lelonek of Monuments by Riverside, a dealer of laser-engraved stones. “And then I say to pick something that’s meaningful to you.”

Suggestions like Lelonek’s are broadly interpreted. On his stone at Washington Cemetery, Mark Shenderovich, who died in 1990, smiles broadly. Betya Balagula, who died in 1997, is severe. Some are pictured in their old age, others as young people. On one couple’s headstone, the wife is dressed in her best while the husband’s shirt isn’t buttoned all the way up.

The new-style stones are highly polished and black, and are cut in exotic shapes. They’re now common among Bukharian, Georgian and Russian-speaking immigrant Jewish communities. The names, written in English, are often elegantly italicized. Poems or epitaphs appear below, often in Cyrillic script. The key features, though, are the portraits, rendered slightly smaller than life size.

The faces reference an Old World tradition that didn’t exist when earlier generations of Jewish immigrants came to the United States. Rabbi Itzhak Yehoshua, a leading rabbi in New York’s Bukharian Jewish community, said Bukharians started putting portraits on gravestones in the 1950s, when they were still in Central Asia. Yehoshua said he suspected that the Soviet practice of building statues and monuments to the dead influenced the practice.

“All over the Soviet Union the cemeteries have pictures on the headstones,” said Leonard Petlakh, executive director of the Kings Bay Y, in the Sheepshead Bay area of Brooklyn. “It’s a totally Soviet thing.”

The technology has developed significantly since the 1980s and ‘90s, when Soviet Jews brought the tradition with them during their mass emigration to the United States. New techniques allow for full-color faces, while easier access to global markets has brought exotically colored granite from quarries in India and China.

None of this comes cheap. The faces were etched by hand until a decade ago; technicians now use machines armed with carbon dioxide lasers. According to Lelonek, a basic laser etching costs between $500 and $800 over and above the $2,500 that families are already paying for the stone. A full-color portrait costs more like $2,000. Add an extra $1,000 for an unusually shaped stone, an option that many Soviet Jews select, and you’re getting close to $5,000 for a headstone.

The cost is the source of one objection some rabbis have to the engraved headstones. “It creates tremendous financial pressure on those who can’t afford it,” said Rabbi Elchonon Zohn, president of the National Association of Chevra Kadisha, an Orthodox group. Zohn also said that some religious authorities consider the stones in abrogation of the Second Commandment, which bans “graven images.” Other rabbis simply object because the stones are a relatively new innovation.

“It’s not in our tradition to put it in,” said Yehoshua, the Bukharian rabbi. “The rabbis, we are not so in favor of this.”

Yehoshua said that the main Bukharian cemetery on Long Island doesn’t allow the Soviet-style headstones. That hasn’t kept Bukharians, and other Jews from the Former Soviet Union, from using the stones elsewhere.

One such place is Washington Cemetery, where the Soviet stones have been jammed into every free corner. You used to be able to drive a car around inside Washington Cemetery, but the pathways have been narrowed to allow more burials, and now only foot traffic is permitted. Cemetery maintenance crews use trucks only a little bigger than golf carts.

The exotically shaped and extravagantly engraved headstones look gaudy next to their more weathered, austere neighbors. Looking down at the black stones from the elevated subway platform that runs over the cemetery, it’s easy to dismiss them as an affectation of nouveau riche immigrants.

A walk around the cemetery dispels that idea. Expensive memorials are nothing new. At Washington Cemetery there’s a massive private mausoleum for the Schancupp family, dated 1912, with stained-glass windows inside. Just feet from a row of recently-etched Eastern European faces lies the eternal home of one Maurice Morrison who died in 1917. Morrison, identified in his epitaph as “the most competent actor in the scenes of Shakespeare’s plays,” chose to be buried under an intricately carved gravestone shaped like a tree. Embedded in that stone? A small photograph of Morrison dressed in a top hat.

Washington Cemetery’s plots are now sold out, so there won’t be many more Soviet-style headstones there. According to some observers of the community, it’s not just at Washington Cemetery where the trend may be running its course. Petlakh believes that, as the community assimilates, the entire practice could soon die out.

“We’re all products of a culture,” Petlakh said. “It will not be definitely there in the next generation.”