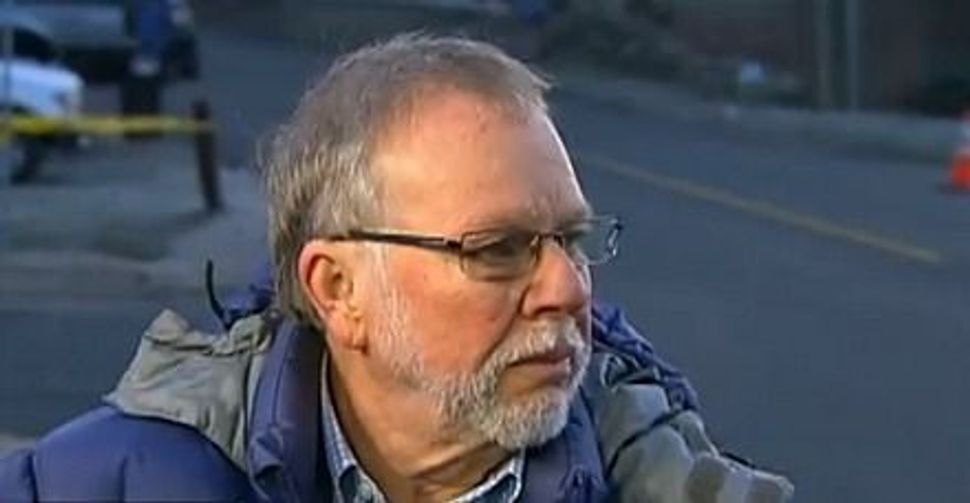 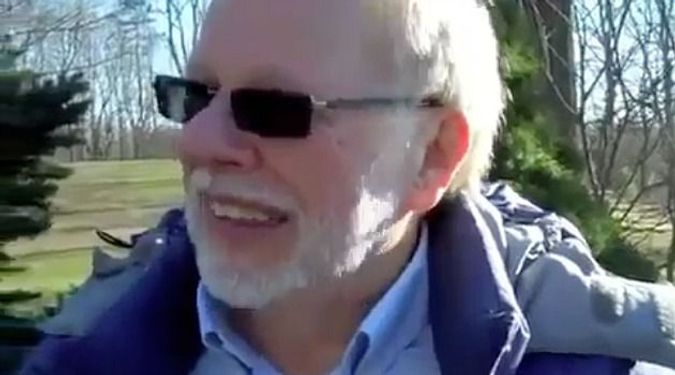 Blame the Jew: Gene Rosen, a retired psychologist, is distraught as he recounts the reactions of children who survived the Newtown school massacre. Conspiracy theorists call the interview evidence that the mass killing never really happened. Image by youtube

Gene Rosen was walking out of his house to get lunch at a diner in his hometown of Newtown, Conn., when he came across six children and an adult sitting in his driveway. Confused, the retired psychologist asked them what they were doing.

The date was December 14, 2012. Less than a mile away, a shooter had just opened fire at Sandy Hook Elementary School. The adult was a school bus driver who had just driven the children away from the scene of the violence.

Rosen, 69, who happens to be Jewish, did exactly what any normal person would do, nothing more, nothing less. He took the children into his house and allowed them to stay there until their parents and authorities arrived to pick them up.

The simple act of kindness isn’t really remarkable. But in a startling and disturbing twist, it has somehow landed Rosen in the middle of a storm of hatred. He has now been targeted by hate-fueled conspiracy theorists who claim the Newtown shooting either didn’t actually happen or was somehow concocted for political gain.

Rosen has been harassed by phone and by email. Fake social media accounts have been created in his name. His story has been the subject of dozens of YouTube videos, one of which is mocked as an “audition tape” for his TV debut. The video shows Rosen, distraught and sobbing, explaining to a reporter what happened from the moment he saw the Sandy Hook children in his driveway.

“[The children] said, ‘What are we going to do for a teacher? Our teacher is dead,’” Rosen says in the video, his voice cracking between sentences.

Rosen’s hesitant manner of speech has been flagged by those suspicious of a cover-up as proof that he is an actor attempting to learn his lines.

“I don’t know what to do,” Rosen told Salon.com in an interview on January 15. “I’m getting hang up calls, I’m getting emails with, not direct threats, but accusations that I’m lying, that I’m a crisis actor, ‘how much am I being paid.’”

The shameless abuse of Rosen, an innocent bit player in the Newtown drama, is fed by the mushrooming so-called Truther movement. Its adherents claim the mass shooting was somehow staged to stir up the debate on gun control. Some suspect that media organizations, perhaps in cahoots with the U.S. government, are concealing part of the story.

The outlandish theory has gained traction in the last couple of weeks. It has been endorsed by extremists like James Wickstrom, a Michigan-based white supremacist and academics like James Tracy, professor of Communications at Florida Atlantic University, who has made his doubts about the veracity of media coverage during events like the Sandy Hook shooting public on his blog, www.memoryholeblog.com. It’s even gotten play from a TV anchor from a local Fox affiliate in Cincinnati.

Rosen’s televised comments were widely seen — he appeared on network news show. But his commends were later derided and reposted on various conspiracy websites including one called www.sandyhookhoax.com. A YouTube video that calls his interview a preplanned “audition tape” has garnered nearly 50,000 views.

The YouTube comments below the video are revealing. They range from “Gene Rosen is a fraud,” to “How come in these set chewing performances does ‘Gene’ not shed a single actual tear? Must be a hallmark of the Holocaust school of acting.”

So how did Rosen, admittedly a Good Samaritan, but one who played a relatively minor role in the story, end up being a target? Is it just a case of no good deed goes unpunished.

Experts on anti-Semitism say it’s not surprising that an iconic national tragedy like the Newtown shooting has become the focus of conspiracy theorists. They also say it is more or less inevitable that extremists will eventually come to blame Jews in some way.

“For some people, whenever an event happens, they will be quick to inject anti-Semitism,” said Mark Pitcavage, co-director of the Center on Extremism at the Anti-Defamation League “[Rosen] is not the focus of the theories but because he is Jewish and has been thrust into the spotlight, conspiracy theories will of course use him.”

Michael Barkun, a professor emeritus of Political Science at Syracuse University specializing in political extremism points to three characteristics key to the conspiracy theorist’s mindset: nothing happens by accident, everything is connected and nothing is as it seems.

“If that’s your view of the world, then appearances can’t be trusted. There has to be some hidden reality and linkings that have to be exposed,” said Barkun, author of “A Culture of Conspiracy: Apocalypitic Visions in Contemporary America.”

Pitcavage said conspiracy theories often pop up around a specific event, particularly a traumatic or widely publicized one.

“These are usually events so awful and traumatic that it’s hard for a number of people to accept a simple explanation for what happens,” Pitcavage said.

Anti-Semitic conspiracy theories are of course, nothing new. But the rise of the blogosphere has made it so that old ideas die harder. “The Internet is the perfect place to incubate conspiracy theories. Old ones like the Protocol of the Elders of Zion, new ones like the Zionists and the CIA engineered 9/11,” Rabbi Abraham Cooper, associate dean of the Simon Wiesenthal Center explained.

The ease with which information can be accessed on the Internet means that fringe views don’t remain on the sidelines of debate, and explosive arguments, once viral, can seem representative of a larger number of people than they are in reality. This didn’t used to be the case.

“If you go back to the 1970s and 80s, you certainly have people that have bias against institutions but they tend to be insulated into little subcultures that had little ability to reach larger audiences,” Barkun said.

Cooper added: “This phenomenon is a huge headache for those of us combating anti-Semitism. You have imagery that’s always there. ‘Who’s the puppetmaster?’”

Another actor in this far-right theater of the absurd is Mike Harris, an editor with the innocuous-sounding web site Veterans Today, which purports to be a “military veterans and foreign affairs journal,” In fact, the site has become a hub for anti-Israel conspiracy theories. In the aftermath of the Newtown tragedy, Harris gave an interview on Press TV, a channel backed by the Iranian government, in which he blamed the Newtown shootings on “Israeli death squads.”

Why? Because, he said, the Israelis were angry about the United Nation’s vote in November to grant Palestinians non-observer status. He also went on to blame

“This is probably the most conspiracy-oriented country in the world,” he said, “It’s gotten worse in recent years.”

But when it comes to the case of Rosen, Potok is disgusted.

“A man who is actually a hero is being pilloried by these people,” Potok said. “Conspiracy theories are the way that weak minds deal with complex situations.”

Cooper suggests that in this case, it may go deeper than that. “When you have to confront evil, some people don’t want to confront the difficult questions,” he said. “They’re more comfortable pounding the usual suspects.”

For now, Gene Rosen is the “usual suspect.” And he doesn’t know what to do about it.