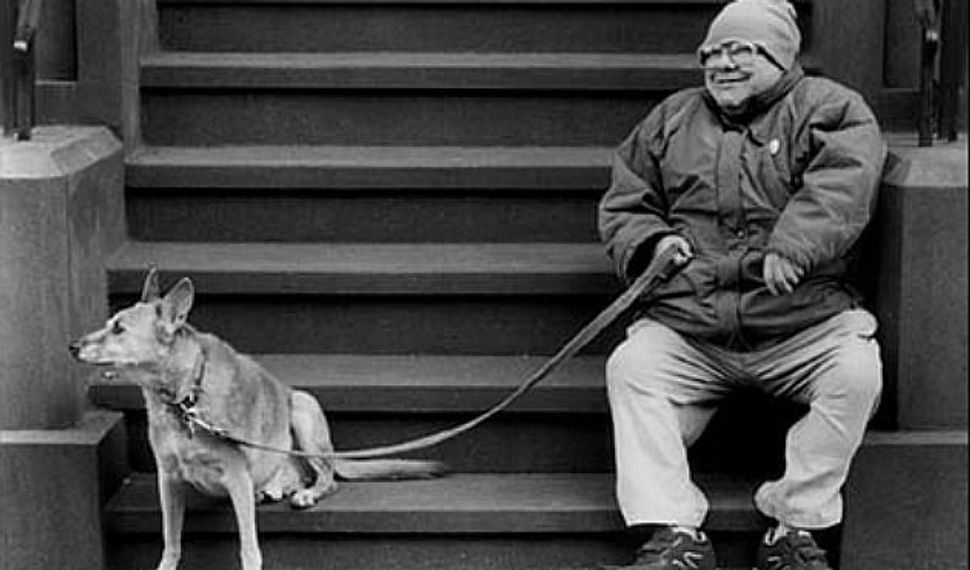 They sat shiva for Larry Selman on Monday night on Bedford Street. Selman, 70, died Sunday morning in a Manhattan hospital from heart failure.

Alice Elliot’s Oscar-nominated documentary, “The Collector of Bedford Street,” chronicled the developmentally disabled man who collected donations for charity in his Greenwich Village neighborhood for decades. Elliot and her neighbors established a trust fund to help support him when the elderly uncle who had been looking after Selman passed away.

Elliot’s apartment was packed with neighbors for three hours for the shiva. Among those who stopped by to mourn Selman’s passing were two separate contingents from Ladder Company 5, the local firehouse where Selman often stopped to sell raffles.

“I miss him terribly and I now have realized that I will never turn the corner of my street without looking for him,” Elliot told the Forward, fighting back tears. “We feel that Larry actually created this community and that we are all beneficiaries of that. I hope we can pass it forward.”

Selman had what is known as a supplemental needs trust established with the help of UJA. Such trusts provide an enhanced quality of life for people living on government entitlements, said Stacy Ferber, community trust administrator at UJA Federation of New York.

“I think he may be one of the only individuals who really had a community come [together] in this type of situation and support him. Usually it’s a family member or a close friend of the family,” said Ferber.

For close to 40 years Selman was a neighborhood fixture, collecting charity for everyone from cancer victims to disabled firefighters. Neighbor Sally Dill said that just prior to his hospitalization on Friday Selman had been collecting donations for a Jewish Association Serving the Aging project that provides pets for seniors. Selman continued to collect for charity after a stroke in 2007 left him in a wheelchair with slurred speech that made it difficult for passersby to understand him. But he was nothing if not persistent when it came to soliciting donations. In Alice Elliot’s film he is seen hitting up a doctor who is examining him for a contribution. And at the party for his 70th birthday in April thrown by neighbors Selman greeted a reporter from the Forward who stopped to extend birthday greeting with a request for money “to help animals.”

Selman was the recipient of The Caring Award in 2009 along with Colin Powell for outstanding contributions as a volunteer. At the awards ceremony in Los Angeles, people were crowded around Powell to have their picture taken with the former Secretary of State. Selman was part of the throng.

“The very first thing Larry said to him was, ‘Would you give a donation to cancer?’” Sally Dill recalled. “And Powell said, ‘Yes, I’ll see you a short time later.’ Sure enough, when he was finished with the photo op, over he came and he handed Larry a folded up bill and Larry put it in his envelope. After the affair we were sitting at the bar at the hotel and Larry said, ‘Let’s count the money.’ And there’s the folded up bill and we open it up and it’s a hundred dollar bill. That was a great moment.”

Selman shared a tiny studio apartment on Bedford Street with his beloved dog Penny at the time of his death. Dill said Selman’s neighbors are looking for someone to adopt the dog. A celebration of Selman’s life will take place April 2nd on what would have been his 71st birthday. The gathering will be held at the Greenwich House Music School in Greenwich Village.

Listen to a podcast about Larry Selman in the wake of Hurricane Sandy.