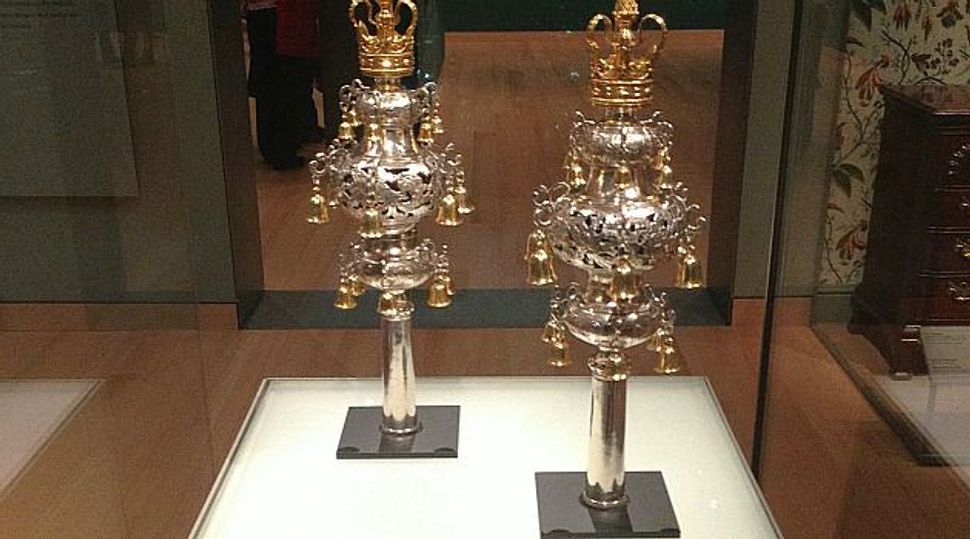 Within a matter of months, the congregation at Touro Synagogue will celebrate the 250th anniversary of America’s oldest Jewish house of worship. But the members of Congregation Jeshuat Israel, who have prayed at the Newport, R.I., building for generations, may have to celebrate outside.

That’s because an argument over a dazzling pair of silver Torah finials — the ornamental bell-like covers that decorate a Torah’s handles — has escalated into a bitter legal battle over the synagogue itself.

The synagogue-vs.-synagogue battle is being waged between America’s oldest Jewish congregation, New York’s Shearith Israel, which was founded in 1654 and Jeshuat Israel, which traces its roots to 1658.

A judge has barred both sides from talking to the media. But court papers filed in Rhode Island and in New York reveal that the Newport congregation is seeking to remove Shearith Israel as trustees of the synagogue so that it can sell the bells, known as rimonim.

Angered by the proposed sale, Shearith Israel asked the court to reaffirm its long-standing position as legal owner of the synagogue. It also wants the judge to block Jeshuat Israel from using Touro in any way.

“Shearith Israel owns… the building, real estate and any and all historic [artifacts] used by or for Touro Synagogue,” the New York congregation asserted in papers filed this past December in Rhode Island federal court. “Jeshuat Israel should be removed as lessee of Touro Synagogue.”

A federal judge has set an April deadline for the synagogues to resolve the dispute amicably.

Embarrassing as the current fight may be, the underlying causes of the conflict have been brewing for some time.

In recent years, the aging and shrinking Newport congregation — in court papers, Jeshuat Israel says it has 143 members — has become increasingly desperate for funds. In 2009, Jeshuat Israel’s leaders floated the idea of selling off assets, including the Torah finials now under dispute, to raise an endowment that would fund a rabbi in perpetuity.

The 18th century finials, crafted by the noted Jewish silversmith Myer Myers, have been on loan to Boston’s Museum of Fine Arts since 2010. The following year, the museum offered the Newport congregation a staggering $7.4 million for the finials, several million dollars more than the congregation hoped to raise a few years ago.

It seemed like a win-win situation: The congregation’s financial future would be more secure, and the finials would be on permanent display in the New England area for the public to enjoy.

But one complicating factor held up the sale: Members of Shearith Israel have been trustees of Touro for more than 100 years, and they stepped in to block the transaction. Several months of negotiations, beginning in the summer of 2012, broke down, and by November both sides were in court. It was a battle reminiscent of a similar legal fight that took place between Jews in New York and Newport over Touro at the turn of the 20th century.

When Touro was consecrated, in 1763, it stood at the heart of a vibrant Sephardic Jewish community. Designed by the celebrated colonial architect Peter Harrison, the synagogue was a symbol of the success that many Jewish merchants enjoyed.

Newport’s venerated position in American Jewish history was cemented in 1790, when George Washington addressed the congregation during a state visit to the town. In his letter to the Jews of Newport, Washington delivered what is widely considered his most eloquent statement on religious liberty — that the American government would give “to bigotry no sanction, to persecution no assistance.”

But just a few decades after that historic moment, Newport’s economy was in tatters, and the Jewish community disappeared.

During the early 1800s, the community’s religious objects and the keys to Touro were placed in the care of Shearith Israel. Two members of Newport’s Touro family left a total of $20,000 to Rhode Island and to Newport authorities to pay for the maintenance of Newport’s synagogue and the upkeep of its Jewish cemetery.

When Jews flooded back into Newport during the late 1800s, it was Ashkenazim rather that Sephardim that dominated the town. By the end of the 19th century, two competing congregations vied for the right to pray in Touro and for a slice of the Touro funds to pay a rabbi’s salary.

The trustees of Shearith Israel backed the smaller of the two congregations, which comprised mostly German Jews. Named Jeshuat Israel, this congregation, which increasingly struggled to form a minyan, had access to Touro.

The noted historian Jonathan Sarna said he has heard tales that Newport police, responding to reports of a break-in at Touro, fought with members of the Touro congregation. After the police were called off, the Touro congregants staged continuous services in the synagogue so that Jeshuat Israel could not retake the sanctuary.

Touro’s congregation lost the ensuing court battle: In 1903, a Rhode Island federal court ruled that Shearith Israel was the rightful owner of the synagogue. But Touro won the war. Realizing that the larger Touro congregation was in need of a home, Shearith Israel helped the two Newport communities to merge, forming the single Newport congregation Jeshuat Israel.

A five-year lease written in 1903, in which Shearith Israel granted Jeshuat Israel permission to use Touro’s land and buildings for the sum of $1 a year, was submitted by lawyers for Shearith Israel as evidence in the current court cases.

Shearith Israel’s lawyers submitted it as one of several documents proving that the New Yorkers are the rightful owner of Touro and of the community’s related land and possessions.

That lease and a subsequent lease in 1908 also show that Shearith Israel maintained a close watch over the Newport congregation.

Although composed mostly of Ashkenazi Jews, Shearith Israel demanded that Jeshuat Israel’s services be conducted “according to the ritual rites and customs of the Orthodox Spanish and Portuguese Jews.” The Newport congregation could hire a rabbi only if it had Shearith Israel’s approval.

Gary Zola, executive director of the American Jewish Archives’ Jacob Rader Marcus Center, said that as the oldest congregation in North America, Shearith Israel “has always taken great pride in its own history and in the long history of Jewish life in America.”

When Jeshuat Israel wanted to make alterations to Touro 100 years ago, the New Yorkers stepped in, preventing the congregants from altering the building. “This is part of the warp and woof of who they are,” Zola said of Shearith Israel’s congregation.

In 1946, Shearith Israel trustees, along with Jeshuat Israel, signed a contract with the U.S. government, designating Touro a National Historic Site.

Jeshuat Israel does not contest Shearith Israel’s historic role at Touro. But its lawyers argue that during the past half-century, Shearith Israel has played a minor role in the synagogue.

The Newport congregation says it has spent $3 million renovating and restoring Touro. It also cites burdensome maintenance and running costs of a recently opened $14 million visitor center, whose construction was bankrolled by Ambassador John Loeb Jr. (Loeb declined to be interviewed about the legal battle.)

Meanwhile, the spark that brought both sides into court may have been extinguished. The Museum of Fine Arts’ offer to purchase the rimonim was good only until the end of 2012. A museum spokesman told the Forward on January 28 that the offer has been rescinded, in part because of the dueling lawsuits.

“Any offer to purchase the objects is on hold until the ownership dispute is resolved,” the spokesman said.

At the beginning of January, Judge William E. Smith gave both sides 90 days to try to find a resolution. Whatever the outcome, most observers are confident that because of its architectural, cultural and historical significance, Touro is in no immediate danger. In addition to its many admirers, the synagogue building is supported by the Touro Synagogue Foundation, whose mission is to preserve it as a historic site.

But the survival of the congregation remains in doubt.

George Goodwin, editor of the Journal Rhode Island Jewish Historical Notes, said many of Jeshuat Israel’s members are either elderly or “spend much of the year in Florida or elsewhere.”

If the congregation were to disappear, as its predecessor did almost 200 years ago, it would be a travesty, Goodwin said.

“Touro is so special because it’s both a museum and a living congregation,” Goodwin said. “So if it were to fail, it would be a horrible indictment of the organized Jewish community in Rhode Island, in New England and in America.”