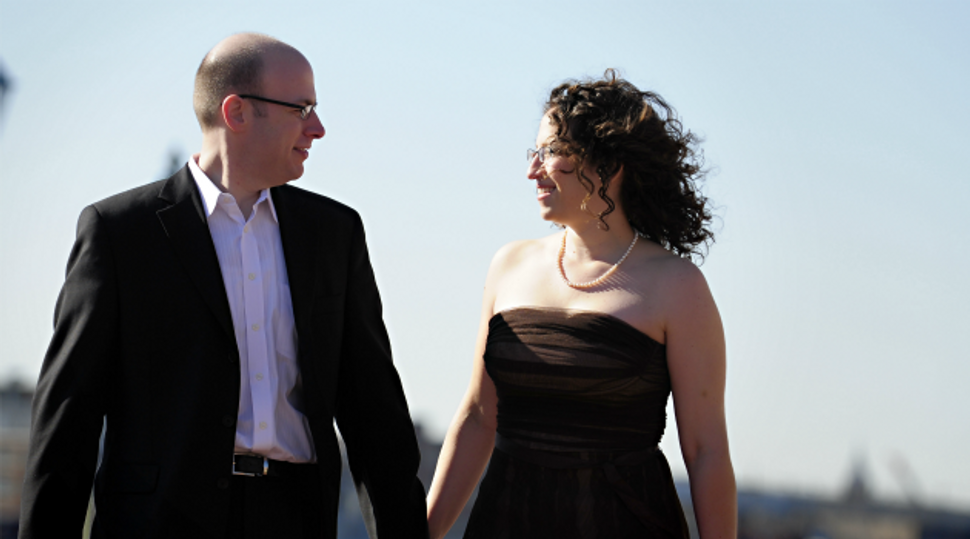 In Real Life: Amy Webb created a point system to rank men on JDate, and found Brian. Image by Courtesy of Amy Webb

There’s no magic formula for love, as both the lovelorn and happily shacked up will tell you, but according to tech guru Amy Webb there is a formula for online dating. Webb, an Internet pioneer who runs her own digital strategy company, took her number-crunching skills to JDate and emerged with a husband.

Frustrated with the algorithm of the site itself, and with social mores that dictated she be a passive recipient of men’s advances, Webb ended up logging in as a series of made-up men and studying the competition carefully. She used the data she found to create a “super-profile” for herself so that she could find someone who met her standards. These included a ranked and numbered list of qualities from the non-negotiable (culturally Jewish but not religious) to the more trivial (no cruise ship travel!). Now she and her husband, who qualified on the list and in person, have a happy marriage and a daughter.

Webb’s book, “Data, A Love Story,” hit stores in time for Valentine’s Day. Already the blogosphere is debating its prescriptions. Should women alter themselves to fit a normative formula? Is it fair to create fake profiles to scope out the competition? Can love even be quantified?

But as I — who found my own partner by happenstance very early in life — sat in Midtown Manhattan, drinking coffee with Webb and her husband, Brian, I realized that the core advice that arises from Webb’s data-driven love story is this: Know and name what you want in a partner, and market yourself so that he or she will want you. Just as we do with our Facebook profiles, she thinks we can play around with superficialities to appear more appealing without changing ourselves at all. The goal of online dating, Webb says, is to get offline as soon as possible, where the important connections — IRL, or “in real life” — are made.

Webb’s journey was triggered by a series of dating disasters. “Data, A Love Story” chronicles a relationship that started with a rom-com like “meet cute” moment — he helped her catch her plane, and when they disembarked, their parents had made friends — and ended with cheating and heartbreak. Post-breakup, in 2005, Webb put herself out there only to experience a string of unfortunate JDates, including a fateful coffee date with a married man. That was the night that she sat down with a bottle of wine and her mathematical proclivity, and began to work on the formulae that would lead her to love.

For Webb, taking this step was second nature. First of all, solving problems with math has soothed her since she was a child. “I’m not like ‘rain man,’” she said jokingly, but she gets anxious, and for her, math is a “form of meditation.” In fact, during the C-section birth of the couple’s daughter, the anesthesiologist was amused to find Brian tossing math problems to his about-to-deliver wife to keep her centered. “What’s calming is focusing on numbers,” she told me. “I think in charts and graphs.”

Another aspect of Webb’s personality that led to her exploration is that she wasn’t interested in playing passive, hewing to the gendered roles that society foists on would-be daters. “I had been following the rules, but it was antithetical to the way I felt,” she said. “I didn’t feel like it was 1950, I didn’t feel I should wait for a guy to approach.” She decided to make the system work for her.

Webb successfully “gamed” JDate in two ways. The one that seems the most complex, and has garnered the most interest, is actually the second part of her plan. It involved logging on to the website as a “man” — screen name “Jewishdoc1000”— enabling her to scope out the competition to reverse-engineer her own profile’s desirability. She ended up crafting multiple male profiles and spending weeks importing more and more data based on the women who responded to these profiles, keeping her contact with those women to a minimum. Webb says that to her, this was the online equivalent of looking around the bar to see what other people were wearing or saying (and then, of course, the less expected part: putting that information on a spreadsheet).

Webb studied what words and images “the popular girls” on the site, some of whom she suspected of being non-Jewish, had on their pages. (Webb’s send-off to the “imposters” who sounded her Jewdar alarm when they referred to cozily spending the High Holy Days with their “bashert,” or soulmate: “The high holidays aren’t like some winter break where you and your ‘beshert’ rent a cabin in Breckenridge and drink hot toddies by the f——-g fire!”) Webb observed that women who used upbeat terms, didn’t dwell on their jobs, and had straight hair and flashed skin in candid pictures fared much better than others did. Her own profile, which her husband told me he would have passed over in “two seconds,” basically read like a wordy and intimidating résumé.

So after a month of accruing data, Webb launched her super-profile: new pictures with good lighting and makeup that show-cased her laughing and looking flirty, and predetermined keywords like “outgoing” and “world traveler,” phrases that denoted confidence and few details about her career.

“The super-profile was optimized, not compromised,” she told me. “I kept my hair curly, I wore glasses, I didn’t dumb anything down… but I also didn’t lead with MIT.”

She was inundated with messages right away.

To be sure, Webb, a self-described feminist, wasn’t thrilled with what her digital sleuthing revealed about the hetero male Jewish psyche. “Would I love it if more men were vocal about liking women who are strong and outspoken? Yes,” she said, relating her JDate struggles to her efforts to make the tech world more gender inclusive. “On the other hand, I’m so much luckier than my mother,” she added, noting that she was able to turn the tables and go after the perfect guy. “My daughter will be even luckier.”

She says from her JDate odyssey she learned to be unstinting in her demands. After years of dating, Webb realized she already knew what she wanted in a mate. That’s why before she even reverse-engineered her own profile, Webb created her Mary Poppins Husband List, a dossier of sought-after qualities, weighted based on two tiers of negotiability. Non-negotiable items? “Good in bed” and “good with money” for starters; someone who must “genuinely like and appreciate my giant, loud Jewish family” and has “no history of cheating.” More negotiable are “of medium build” and “appreciates the beauty of a well-crafted spreadsheet.” Webb converted this list into a point system and declared that she would not even go on a single date with anyone worth less than 700 points. Even when she first began to fall head over heels for Brian, who qualified, she continued to tally his attributes against the list. Sometimes they both still look at it.

As for the list’s title, recall the two tykes in “Mary Poppins” creating their description of the perfect nanny, a description that travels through the ether and morphs into Poppins’s curriculum vitae. That approximates how Brian felt when, a few dates into his relationship with Webb, he found out about his new flame’s methods. “When I saw the list… I thought, ‘Did she conjure me?’” he said.

Clearly, she didn’t have to worry about his appreciation for spreadsheets. In fact, Brian, an eye doctor, thought her JDate gaming “was an excellent solution to the problem.” They clicked, sometimes too well: Early on as parents, they were both scolded by their pediatrician for logging too much of their infant daughter’s activity into a binder.

But their IRL compatibility beyond the Mary Poppins lists was even better. Brian learned about Webb’s mom’s cancer (a sad reality of her life, which she had decided to omit from her super-profile) the same time that he learned about the list. He was able to sit with mother and daughter in the hospice, giving the family support and assurance that Webb’s daughter would be loved. And the couple meshed during the holidays. For both Amy and Brian their interpretation of their Jewishness — deeply cultural, but without the God aspect — is key to their ability to join together two families and create their own from the mix.

“The biggest mistakes Jewish people make [when dating] is, they don’t stop to think about what their Judaism means,” Webb said. “You can be Jewish but in different ways.” Or as Brian puts it, “I had taken another girl to Passover — it didn’t go well.”

Their story has a happy ending: two culturally Jewish data enthusiasts in love. But Webb thinks that her book, besides being an entertaining story of romancing in the digital age, has usefulness for everyone, even right-side-of-the-brain types, who have no interest at all in gaming, reverse engineering or putting algorithms together. It boils down to articulating desires. “Make a list of what you want. Even if you don’t score it, stare at it. It’s a really revolutionary thing,” she said.

Sarah Marian Seltzer is a writer in New York and a contributor to the Forward. Find her at www.sarahmseltzer.com.