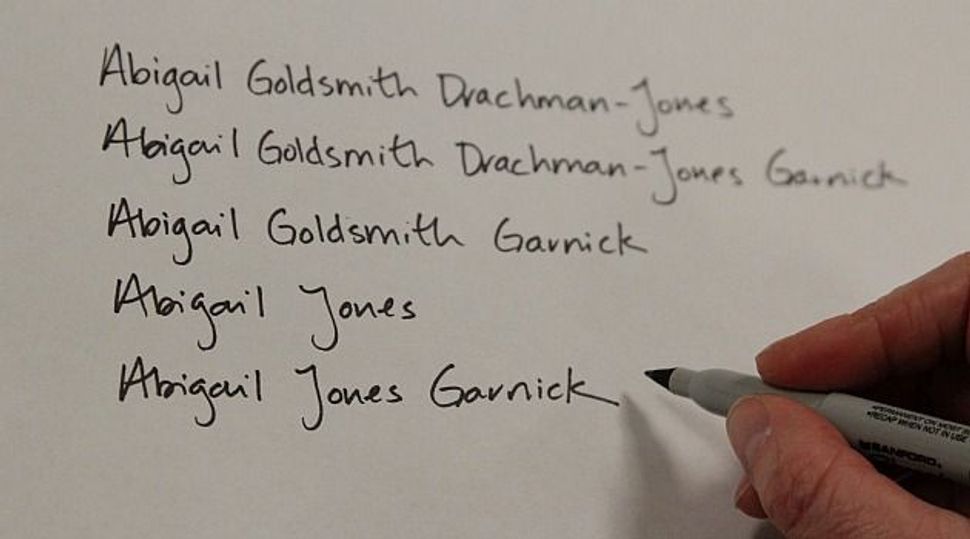 I recently got engaged, and despite the fact that my byline is short and simple, figuring out what to do about my last name will be tricky. While I write under the name Abigail Jones, my full name is Abigail Goldsmith Drachman-Jones. That’s eight syllables, 29 letters, four words and one punctuation mark. It’s a lot of baggage to carry around: My name never fits on forms, makes booking dinner reservations or picking up prescriptions at the pharmacy difficult, looks like one gigantic typo on my driver’s license (“DRACHMANJONES”) — and don’t even get me started on the mispronunciations (BraCH-Man Johns). But it’s been my baggage and my name for 32 years.

And so when I started to think about whether or not I would change my name after getting married, suddenly I became paralyzed.

A wedding requires countless decisions — about colors, flowers, dresses, hair, makeup, food, registries, photographers, guests, invitations, seating assignments — but for many women, myself included, the hardest, most meaningful choice is about whether to change our last names. My fiancé is supportive of whatever I decide. But let’s be honest: He has it easy. Changing names after marriage is a traditionally gendered issue; women are the ones who typically make the big shift, not men. And so there are no great identity crises in his future, just the looming possibility that he might get to share his last name with his future wife — plus the fact that he will pass on his last name to his future children. For me, the coast is not so clear.

The first American woman to ever keep her name after marriage was Lucy Stone, a women’s rights activist in the 1850s. (Interestingly, she was also the first woman to earn a college degree in Massachusetts and to be cremated in New England.) Over a century later, by the 1990s, 23% of American women kept their last names, according to a 35-year study published in the journal “Social Behavior and Personality.” By the 2000s, that number dropped to 18% and then hit a low of 8% in 2011.

Not surprisingly, age matters. The further women get into their 20s and 30s, the more established their careers become, making it less desirable to change their last names. Indeed, a 2010 study found that women who married between the ages of 35 and 39 were 6.4 times more likely to keep their names than women who married between 20 and 24. I fall smack in the middle of those two groups. I have built a thriving journalism career using my own name (well, half of it), and so starting over now feels like a mistake, especially in an age when the Internet and social media dominate my field. What would I do about my Twitter handle? My Instagram username? My professional website? Should I use one name for my work and another in my personal life?

Throughout my life, my marathon of a name has been good to me. I met my oldest friend on the first day of kindergarten precisely because we were the only two kids in our class with hyphenated last names. In second grade, I learned that my initials, ADJ, were the same as the abbreviation for the word “adjective,” a fact that I have loved ever since. And in middle school and high school, I sported a teal L.L. Bean backpack with my initials stitched on the back; “AD-J” never looked cool, but it had character.

Of course, names represent more than just personalities and childhood memories; they encapsulate where we come from and ensure that family stories continue being passed down generation after generation. My parents chose “Abigail” for the many famous Abigails in American lore (they are both historians, and my mother specializes in women’s history); “Goldsmith” to honor my German-Jewish ancestors on my mother’s side who, in the 1840s, emigrated from Germany to Baltimore and, later, New York City; “Drachman” to carry on my mother’s last name (which she kept, both professionally and personally), and “Jones” to carry on my father’s.

I won’t delve too deeply into the story of my childhood nickname, Abba, but suffice it to say that it had nothing to do with the band and everything to do with Louisa May Alcott’s mother. (Disco was on its deathbed by the time of my birth anyway.)

My hyphenated last name — Drachman-Jones — also honors the fact that I am the daughter of a Jewish mother and a Protestant father. I identify as Jewish, and I also greatly value the Ethical Culture tradition that has been passed down on the Jewish side of my family. My last name reminds me that I celebrate both Hanukkah and Christmas; that I had a Bat Mitzvah and also grew up dyeing Easter eggs.

While my Jewishness is so much more than just my name— my family will always celebrate the high holidays by gathering together, cooking our favorite foods, telling stories and spending time together, regardless of what I decide — I can’t help but feel that changing it will mean losing parts of my heritage. After all, my mother kept her name and hyphenated mine precisely because she believed it mattered. And she and my father gave me my middle name precisely because it meant something to our family. Besides, as a tall, blond woman who doesn’t look particularly Jewish, my name is the only real indication to the outside world of my Jewish identity.

So yes, I could I keep my name. Or I could take my fiancé’s. I could keep parts of mine and add parts of his. I could even become a double hyphen. Simply put, there is no easy answer to the age-old and hugely common dilemma of how to preserve one’s family while simultaneously creating a new one. Just as surely as I want to share my last name with my future husband and future kids (that desire is especially intense when you grow up in a family like mine, with three different last names among four people), I also want to hold on to my personal and professional identity as a “Goldsmith Drachman-Jones.” Where does that leave me? Deep down I have a feeling that I’ll take my fiancé’s name, at least in my personal life; writing this article is my first stab at accepting that choice.

Abigail Jones is the digital features editor of the Forward. She can be reached at [email protected] or on Twitter @abigaildj.