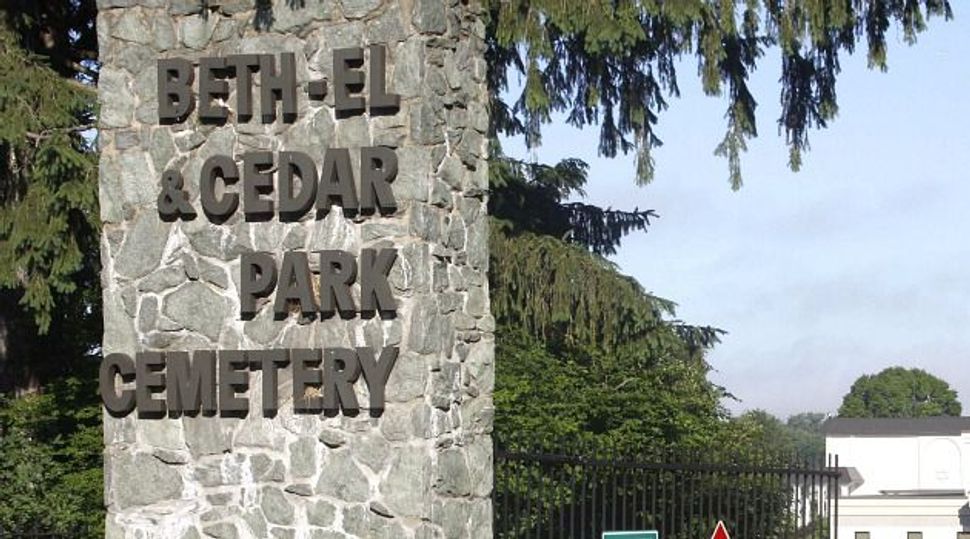 Have I Got a Grave for You: Plots at Jewish cemeteries are being hawked on the internet and through classified ads, even though state laws prohibit such transactions. Image by shulamit seidler-feller

A black market in Jewish graves is hiding in plain sight on the classified pages.

Defunct Jewish burial societies have been selling cemetery plots at bargain basement prices through classified ads on Craigslist and in the print edition of the Forward — even though New York and New Jersey state laws bar these sales.

Each sale of a New York grave by a burial society on the open market could be punishable by up to six months in jail, according to the state’s top cemetery regulator, though no one has ever been prosecuted. New Jersey law carries no such penalties, but still prohibits the sales.

A Forward investigation found three people selling graves owned by old burial societies through classified ads. Among them, the sellers admitted to having unloaded somewhere around 100 graves. All three denied any wrongdoing. 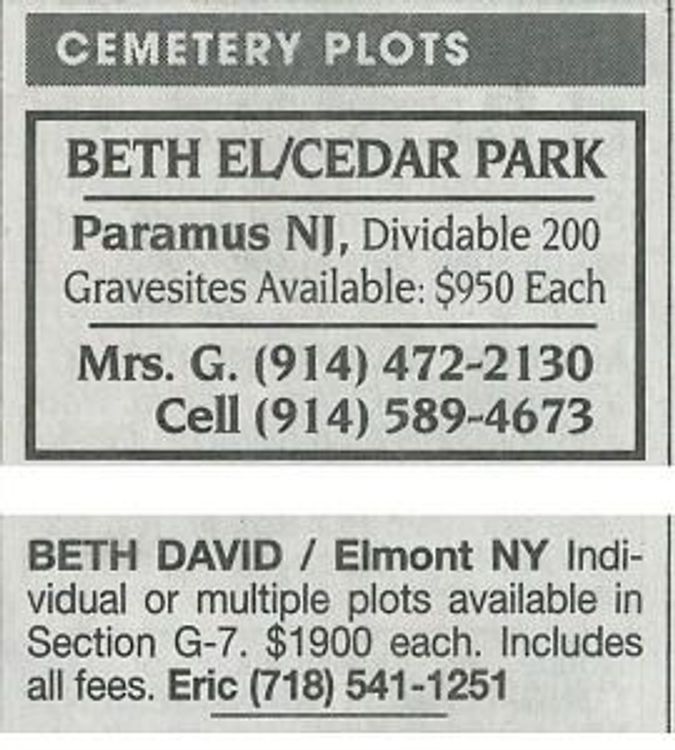 The associate publisher of the Forward, Barry Surman, who does not oversee editorial operations, said that the newspaper could not screen individual burial plot ads for their legality.

No one has ever been charged with a crime for reselling burial society graves, and experts disagree over whether the sale of New York graves constitutes a misdemeanor. The black market in burial plots, however, could imperil the long-term survival of Jewish cemeteries in the two states.

The illegal sales identified by the Forward represent hundreds of thousands of dollars in lost profits for Jewish cemeteries, which by law should be selling the graves themselves. Cemeteries often struggle to stay solvent after all their plots are sold, and profits from such grave sales are meant to help ensure the cemeteries’ upkeep. Instead, since these graves are sold on the open market, the profits wind up under the control of the burial societies’ officers.

“The law prohibits that private market,” said Richard Betheil, a New York cemetery law expert who is the attorney for a handful of Jewish cemeteries. “Obviously people do pursue it anyway, because there’s money to be made.”

Only cemeteries are generally allowed to sell cemetery plots on the open market in New York and New Jersey. But in the two states’ Jewish cemeteries, mutual aid societies, called landsmanschaften, own huge inventories of empty graves. Founded at the turn of the past century by Jewish immigrants from the same town or region in Europe, the societies bought up large tracts of cemetery land, erected stone gates lined with the names of the societies’ officers and readied plots for their dues-paying members.

Today, many of those societies and congregations have disappeared, leaving behind empty, unclaimed graves.

As the societies have withered away, control of the organizations and their assets has passed down within families. The officers who now run the landsmanschaften — often the children or grandchildren of earlier officers — have found themselves responsible for cemetery land worth hundreds of thousands of dollars.

It’s a business opportunity that many find difficult to turn down.

Eric knows very little about the society. Even the name doesn’t come easily to him — he had to look it up when asked about it.

Judging by its name, the society was likely founded by Jewish immigrants from the town of Przedborz in Poland sometime around 1900. When Eric became president, the society was effectively defunct.

“Nobody had come forward in God knows how many decades,” he said.

Not a single member had claimed a plot during the entirety of his father’s tenure as president. Yet the Przedborzer Friends still owned about 20 unused plots in Beth David Cemetery in Elmont, N.Y. Eric decided to sell off the plots.

In New York, societies may take their graves to the open market only after first offering to sell them back to the cemetery. The law makes it easy for the cemeteries to buy back the plots, requiring that the societies offer them to the cemeteries at the price at which the plots were originally purchased plus simple interest of 4% a year. The resultant price is invariably far below the plots’ current value.

In Eric’s mind, the exchange was a negotiation. The law sees it differently. The price the societies offer to the cemeteries is designed to be artificially low, giving the cemeteries a chance to turn a quick profit by reselling the plots at the going rate. The rationale is that this gives the cemeteries a way to bulk up their financial assets so that they can afford to maintain their facilities after they have put their last coffin in the ground.

A burial society isn’t allowed to reject the cemetery’s offer. If a cemetery is interested, the society can’t offer the graves on the open market. Yet that’s exactly what Eric did. He turned to the classified pages of the Forward, where he said he had seen other societies selling their plots. Eric’s ads offer “Individual or multiple plots” for $1,900 each. “Includes all fees,” the ads note.

According to Warren Rosen, an official at Beth David, the cemetery currently sells plots for about $3,500 each. Rosen said that Beth David had not turned down any offer to buy the empty Przedborzer plots.

Eric said he has sold about half of the society’s 20 graves. He has spent the profits on family expenses, including health care for his aging parents and tuition for his children.

“It’s not like I’m engaging with any debauchery with the money,” Eric said.

Roslyn Gersten, who runs a classified in the Forward advertising the sale of 200 graves owned by a defunct society called Congregation Nusach Sfard at Cedar Park & Beth-El, a Paramus, N.J., cemetery, said that the income from the graves she sells is donated to charity.

“We give to only Jewish organizations,” Gersten said. “As they come in, I dole out the money.”

Gersten said that proceeds from the sales of the graves had been given to the Zionist Organization of America, a right-wing pro-Israel group, among other organizations.

Wherever the profits go, experts say that the societies shouldn’t have received them in the first place.

New York State’s top cemetery regulator, Division of Cemeteries director Richard Fishman, told the Forward that people who sell New York graves owned by societies on the open market are committing a misdemeanor under the state’s not-for-profit code, punishable by a fine of up to $500 and a jail term of up to six months for each sale. Fishman admitted that no one had ever actually been charged with a misdemeanor for the offense.

Cemetery law is slightly different in New Jersey. There, societies are similarly barred from reselling their plots on the open market, and cemeteries are entitled to seize a society’s plots if that society has been found to be reselling them, according to a spokesman for the New Jersey Division of Consumer Affairs. There is no possibility of prosecution.

In an email, Gersten told the Forward said that she had offered the plots back to the New Jersey cemetery where her society owns its plots and that it had declined to purchase them. She also said that she makes the maintenance and preservation fund payments required by law with each transfer.

That Gersten offered the graves to the cemetery should not make a difference under New Jersey law; the buy-back provision appears to be exclusive to New York. It does suggest, however, that the cemetery may have been aware of her activities and chose not to exercise its option to repossess her plots. The cemetery, Cedar Park & Beth-El, did not respond to repeated requests for comment from the Forward.

In New York, where the law is stricter, some burial society officers argue that their sales can be construed as efforts to find new members for their societies. “Who’s to say that I’m not selling to members of the organization?” Eric said. When people contact him about the ads he’s placed in the Forward, Eric said that he explains to them that they are joining a burial society. “You don’t have to go to any meetings, but now you’ve just joined the burial society,” Eric said he tells them.

Since last December, a man named Jack Neiman has posted at least nine free ads on Craigslist offering plots at Montefiore Cemetery, a Jewish cemetery in Queens, for $1,500. A representative of Montefiore said that the cemetery charges $4,500 for plots like the ones Neiman is selling.

Neimen’s ads, which differ slightly from each other, are somewhat disjointed. Most include the phrase “This plot is located in a nice location and we are asking $1,500.” The ads note that the price is “negotiable.”

Contacted by the Forward, Neiman said that he led the Podembitzer Benevolent Society, a 107-year-old landsmanschaft that once maintained an address on East Broadway on the Lower East Side.

Though some of Neiman’s Craigslist ads include the phrase “Jewish society,” all read as ads for cemetery plots, not burial society membership.

“It’s a subterfuge,” said Fishman, the cemetery regulator of claims such as Neiman’s. “These graves were sold for a specific purpose to an organization that has now basically died out…. What these guys are doing is selling their remaining graves to nonmembers with the idea of making them members, but there is no real organization per se, and they’re charging a lot of money for this privilege.”

Fishman said that he has complained to Craigslist about ads for burial plots in the past, and that those ads have been removed. Betheil said he opposed the Forward’s decision to accept the ads.

“Would we want to discourage that practice? Yes,” Betheil said of the Forward’s classifieds.

Forward business staff said that the newspaper could not screen each classified advertisement for a cemetery plot for legality. “The Forward won’t knowingly abet illegal or abusive business practices,” said Surman. “But we can’t determine the legality of plot transfers offered in our classified section. Cemetery regulations can be complex and they vary significantly by state, and sometimes even by county or town.”

For Betheil, the problem isn’t just that the sales break New York law.

“There’s going to be a time when every cemetery… is going to find itself without graves to sell, and the finances of the cemetery become much more precarious at that point,” Betheil said. “It’s really their investments and their land sales that make the difference.

“Unlike most entities, [cemeteries are] designed to be here forever.”