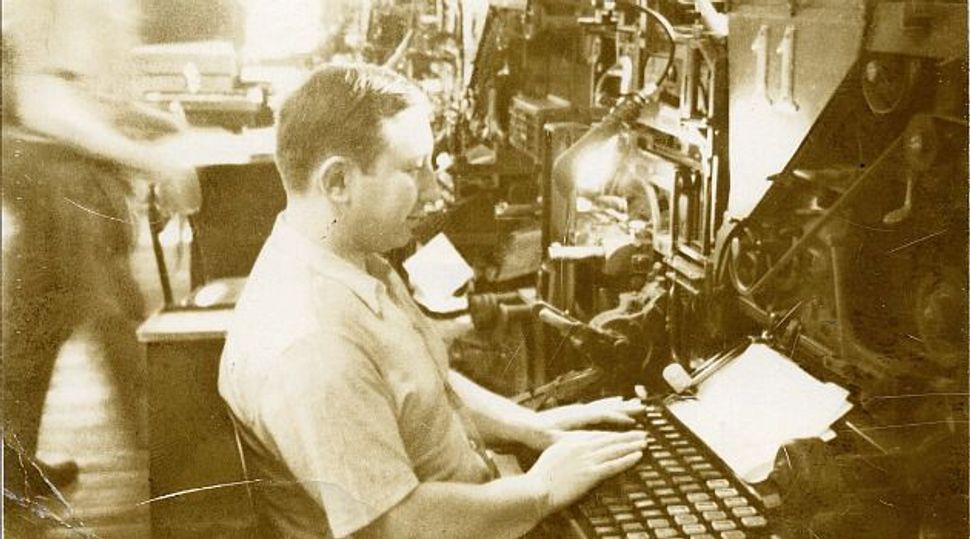 So Long, Louis: The Forward?s long-serving copy editor, Louis Katz, has edited I.B. Singer and other luminaries during a colorful career. He?s also earned a lifetime of respect from his colleagues. Image by getty images

The honorific “Mr.” is applied to just one member of staff at the Forward. Not to Forward Association president and newspaper publisher Samuel Norich, nor to the chairman of the board, Jacob Morowitz, but to a Yiddish copy editor, Louis Katz.

The elfin Mr. Katz — or simply “Katz” or “Ketsele,” as he is referred to by his Yiddish colleagues — left the Forward on February 7, half a century after joining the newspaper as a typesetter and one day shy of his 79th birthday.

“I am telling you, I’ve worked at the Forward a long time and I’m really sorry that I have to go now, because I could have worked [until I was] 120, if I would live so long,” Mr. Katz said during an hour-long interview on his final day at the newspaper.

Mr. Katz, whose accent is in a continuous tug-of-war between his upbringing in Poland and more than three decades in blue-collar Brooklyn and Queens, joined the Forward on October 15, 1962.

He remembers the exact date because he was asked to begin one day earlier, on Yom Kippur, but he refused. “I didn’t want to start my career at the Forward on Yom Kippur,” Mr. Katz said, though he added that occasionally he did work on the holiest day of the Jewish calendar.

Mr. Katz joined the Forward a decade after the end of the legendary reign of editor Abraham Cahan, when circulation was a fraction of its more than 250,000-a-day peak. Nevertheless, the 80,000 daily copies that Mr. Katz helped produce during the 1960s in Yiddish — distributed to newsstands across New York City and other major American towns and cities, seven days a week — dwarfs the 2,100 biweekly circulation today.

Mr. Katz’s departure coincides with the Forward’s transition to a fortnightly print publishing schedule because of financial pressures and falling circulation, in favor of a more robust, daily presence on a newly redesigned website. More important, though, it marks the end of a generation of long-serving Yiddishists, from Isaac Bashevis Singer, who contributed to the Forward for more than 50 years, to Rabbi Aharon Ben-Zion Shurin, who for 60 years wrote a column on religious affairs.

“The Forward has this élan and this stature in the world of Yiddish-speaking, Yiddish-writing literati in the 20th century that no one else had, and I think it kept people working there,” said Norich, who is publisher of both the Yiddish and the English newspapers. “The fact that people kept working there contributed to the fame and significance of the publication.”

Mr. Katz began his Forward career operating one of more than a dozen 3.5-ton linotype machines on the 10th floor of the Forward building, on Manhattan’s Lower East Side. “Linotype are big monsters,” Mr. Katz said, as he described how he would punch out copy on a Yiddish keyboard that would be transformed by the whirring and clacking machine into lines of hot metal type.

According to union rules, members of the typographical union were the last people to make changes to copy before it was printed. And so it was, several years after Mr. Katz started working at the Forward, that he began his relationship with Singer, one of the newspaper’s most famous writers.

One day, in 1964 or ’65 — Mr. Katz does not quite remember when — the typesetter who usually set Singer’s work went on vacation, so the foreman asked Mr. Katz to step in. Mr. Katz noticed a stylistic error and corrected it. “Maybe if I had known at that time that [Singer would become] a Nobel Prize winner… I wouldn’t have the guts to do that,” Mr. Katz said.

Singer wanted to know who had corrected his copy, so the foreman brought him to Mr. Katz.

“Fun vanen shtamstu?” — Where are you from? — Singer asked Mr. Katz, who replied that he was from Warsaw, Poland.

“From now on, you gonna be my typesetter,” Mr. Katz said Singer told him.

Mr. Katz went on to set — and correct — Singer’s copy for the next decade. He said that he did not correct for spelling errors, only “stylistics.” Sometimes, Mr. Katz said, “the sentence would not build properly.”

Mr. Katz recalled Sholem Asch (“tremendous”), David Bergelson (“wonderful”), Boruch Shefner (“terrific”). Then there were editorialists such as David Shub, who had an encyclopedic knowledge of the Soviet Union, and Jack Rich, who, in an editorial during the 1964 presidential election, called Barry Goldwater a “meshugener.”

Although Mr. Katz spent most of his career setting and correcting Yiddish, he did not learn the language until he was imprisoned with his family in the Warsaw Ghetto when he was 6 years old.

His sister died of typhus in the ghetto. His father jumped from a train bound for the Majdanek concentration camp and spent the rest of the war fighting alongside the partisans. “He died after the war, [because of] everything he went through,” Mr. Katz said.

Mr. Katz and his mother were smuggled out of the ghetto in 1942. He survived the rest of the war hiding alone, first on a farm and then in a convent.

After the war, Mr. Katz reunited with his mother. In 1958 they moved to Paris, where he joined the Jewish labor union, the Bund. He landed his first newspaper job there on the Bundist daily, Undzer Shtime (Our Voice). And from across the Atlantic he read the Forverts daily to familiarize himself with American Yiddish.

When he arrived in New York, in 1962, Mr. Katz found temporary work as a typesetter for a 130-page High Holy Days edition of the Morgen Freiheit, a Communist Yiddish newspaper. Soon after that work ended, he landed the job of his dreams at the Forward.

Mr. Katz took a 14-year break from the Forward, between 1976 and 1990, to help his brother-in-law in the “shmatte business.” But he said that his mind never left the Forward, because “the Forward did good things for me.”