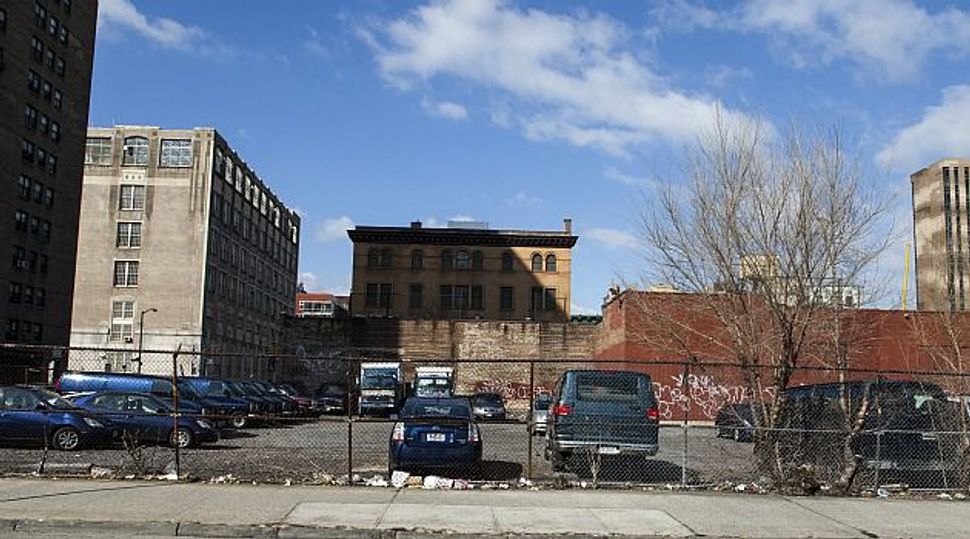 Location, Location: The development of an unimpressive looking stretch of the lower East Side after decades of delay signals a political changing of the guard in the fast gentrifying area of Manhattan. Image by ari jankelowitz

Yet there stand the parking lots, their half-century-long presence a testament to the political muscle of the Jews of Grand Street in blocking unwanted development on New York’s Lower East Side. But new construction on these sites may start soon and that, in turn, is a testament to how Jewish political muscle is starting to weaken.

Power on the Lower East Side lacks mystery. Ask a resident of the Grand Street co-op apartment complexes who has power in the neighborhood and the answer is straightforward: Shelly, Willie and Heshy.

That’s Sheldon Silver to you, speaker of the New York State Assembly and a Grand Street local. William Rapfogel, also a Grand Street resident, is head of the Metropolitan Council on Jewish Poverty, a massive citywide social service agency. Heshy Jacob is officially the manager of two of the Grand Street co-ops, but he’s also a local operator involved in just about everything.

The three are the backbone of Grand Street, neighborhood shorthand for the co-op complexes built by the heavily Jewish garment unions after World War II.

“We put in time and effort for the people,” Jacob said. “It’s not that we simply are despots.”

Their leadership isn’t being directly challenged. But the Lower East Side is changing, and the men are working to keep from being left behind.

When former Community Board No. 3 president Dominic Berg moved to Grand Street in 1999, the Lower East Side was on the brink of gentrification. Within a few years, the neighborhood would be full of luxury apartment buildings and expensive restaurants. The parking lots on the south side of Delancey, however, would still be parking lots.

Bulldozed as part of a slum clearance project in 1967, the blocks between Grand Street and the Williamsburg Bridge had been torn up and then left to rot. When the old tenements that housed generations of immigrants were first pulled down and nearly 2,000 poor families were evicted, the plan was to build new low-income housing. Many of the middle-class Jews of nearby Grand Street, however, didn’t want more poor neighbors.

The fight over the Seward Park site wasn’t over whether the tract should be redeveloped. Everyone wanted to put something on the blighted block. No one could agree, however, on how much low-income housing should be included in the redevelopment plan. Advocates and opponents fought bitterly for decades. A community meeting on the issue in 2004 “turned into complete and utter chaos,” Berg recalls.

When Berg was elected to head the community board in 2008, he saw a political opening. The Grand Street co-ops were changing. The apartments once full of older Jews were turning over, the long-term residents being replaced with younger families.

Some of these new families were Jewish. Some, like Berg’s, were half Jewish. They were separated from their older neighbors by a generational and a cultural gulf.

With backing from the new residents, Berg shepherded through a compromise on the redevelopment plan that was approved by the community board and the New York City Council. With the support of an enthusiastic Mayor Michael Bloomberg, the long-delayed Seward Park redevelopment, as the plan for doing away with the parking lots is known, is finally moving forward. Proposals for the site are due from developers in May.

“The co-ops have changed a lot,” Berg said. “There were people that were really able to say, this one voice that’s been on Grand Street isn’t a monolithic voice anymore. We want to see progress on these lots.”

On a Monday morning in February, Nick Rhodes, 30, is walking his tiny black dog outside the Seward Park Cooperative, the Grand Street co-op complex closest to the redevelopment site. He’s drinking coffee from Pushcart Coffee, a hip coffee shop on East Broadway, and has a hip moustache that ends in a swirl.

Rhodes’s great grandfather lived on nearby Henry Street, but when he moved into the co-op eight years ago he says he was the youngest person on his floor by 50 years.

If Rhodes is the new Grand Street, Heshy Jacob is the old Grand Street. Jacob isn’t just a building manager. He’s also the head of Hatzolah, the Jewish volunteer ambulance company, and the chairman of the United Jewish Council, the umbrella group for local Jewish organizations on the Lower East Side.

“If you’re the person that somebody has a problem and he goes to [you] day and night, you take the time and effort to help them, then they think you’re in charge,” Jacob said. “They go to Willie, they go to Heshy, they go to Shelly.”

The three men make an odd set. Rapfogel is clean cut and professional, a highly compensated not-for-profit CEO with a winning smile. Jacob, a Hasidic Jew with a beard and a white shirt, is known as a verbal brawler. Silver, for decades among the two or three most powerful men in New York State, operates behind the scenes, his fingerprints easy to miss.

The men are seen as allies. They all pray at the Bialystoker Shul on Willet Street, and Rapfogel’s wife, Judy, works as Silver’s chief of staff. Rapfogel, however, rejected the notion that the three formed some sort axis. “We don’t even speak that often,” he said.

The men have been in the neighborhood for decades, and they remember a time before gentrification when Rivington Street, now full of restaurants, was a dangerous place to be at night. Rapfogel said that the opposition of the old-school Jews of Grand Street to low-income housing in the neighborhood was rooted in that dangerous past.

“Many people felt that the most important thing for the community would be economic development on the Seward Park site,” said Rapfogel. “Their fear was that housing on that site would increase crime in an already crime-filled area.”

Observers see Silver in particular having a hand in the in the multidecade-long delay. Tom Robbins, a veteran investigative reporter for the Village Voice, explicitly blamed him in a 2008 story for that paper. Other articles have made similar claims.

In an emailed statement, Silver said: “From the beginning, I have been very supportive of an open, community-driven process for developing a plan for the Seward Park Urban Renewal Area.”

Jacob, for his part, has been the most vocal opponent of low-income housing on the Seward Park site. “Why target the Lower East Side for more low-income units?” he asked the New York Times in 1994, in opposing an earlier version of the plan. “We have enough of that type of housing already.”

Yet Willy, Heshy, and Shelly’s Grand Street isn’t what it used to be. Fifteen years ago, the co-ops changed their rules, lifting price restrictions and, in effect, allowing apartments to be sold at market prices. New post-gentrification arrivals came without the decades-old anxieties and grudges. All at once, the land started shifting under the old guard.

“If an apartment opens up today who moves in? Yuppies, and they’re paying a fortune,” said Jacob.

Michael Tumminia, an accountant, moved into the Seward Park Cooperative in 2004. He isn’t Jewish, but his wife is. Tumminia was elected president of the building complex’s co-op board in 2009. That year, the majority of co-op board members elected were not Jewish — a shock in a building once predominantly Jewish.

Tumminia and his allies backed the redevelopment. The new arrivals wanted more stores in the neighborhood. There are signs of gentrification in the immediate area of the co-ops, like a high-end pediatrician’s office and a fancy donut shop. But the trendy explosion on the other side of Delancey has eluded this part of the neighborhood. Some basics are missing, too, like a movie theater.

Upon his election, Tumminia told a local blog called The Lo Down that he hoped to push for development of the Seward Park site. Soon after, he got a call from Jacob.

“He was very clear with me that my point of view was different from the historical point of view of the Lower East Side,” Tumminia said.

Meanwhile, Berg, who also isn’t Jewish but lives in the Seward Park Cooperative with his Jewish husband, had just been elected to head the local community board. In early conversations with Silver’s office, Berg said that he saw openness to backing a new deal.

Tumminia said that it’s clear that his co-op board got Silver’s ear. The co-ops represent 4,000 apartments and tens of thousands of votes. Those votes historically had been anti-redevelopment, but now they had elected a pro-redevelopment co-op board. “I think in the end you have to consider, what do my constituents want,” Tumminia said.

“Sheldon Silver’s political base was no longer speaking with one voice on the issue,” wrote blogger Ed Litvak of The Lo Down in an email to the Forward. “While some of the people closest to Silver continued to oppose any redevelopment plan that emphasized affordable housing, it became untenable politically for him to oppose a compromise so many of his constituents had worked to achieve.”

The deal hammered out under Berg’s watch isn’t what advocates for affordable housing had been hoping for. According to the Request for Proposal, which the New York City Economic Development Corporation issued on January 9, the ten parcels will be split between commercial space and residential space. Only 1,000 residential units will be built on the lots, only half of them “affordable.” Those affordable apartments are set aside for a variety of income levels.

Yet the plan benefited from heavy support from city government. It’s one of a number of major redevelopment projects that the Bloomberg administration is working to initiate in its final term.

So Silver is on board. “The final guidelines were adopted by the community board unanimously and reflect the needs and wishes of our neighborhood,” Silver said in a statement emailed to the Forward. “I look forward to seeing the construction of much-needed housing, public space, retail and other amenities that will further encourage our Lower East Side community to continue to grow and thrive.”

Rapfogel said that his group, the Met Council, was now considering participating in a bid to partner with a developer. “It’s a plan everybody can feel very comfortable about… It would have been great if we had done it 30 years ago so my kids would have had a movie theater to go to,” he joked.

But unlike his onetime allies, Jacob is standing firm. His constituency doesn’t include the new co-op residents, and he isn’t beholden to their desire for development. He still opposes the redevelopment plan.

“This is one of the most valuable pieces of property in Manhattan,” Jacob said. “Why does there need to be low income housing on this site? That’s what you have to explain to me.”