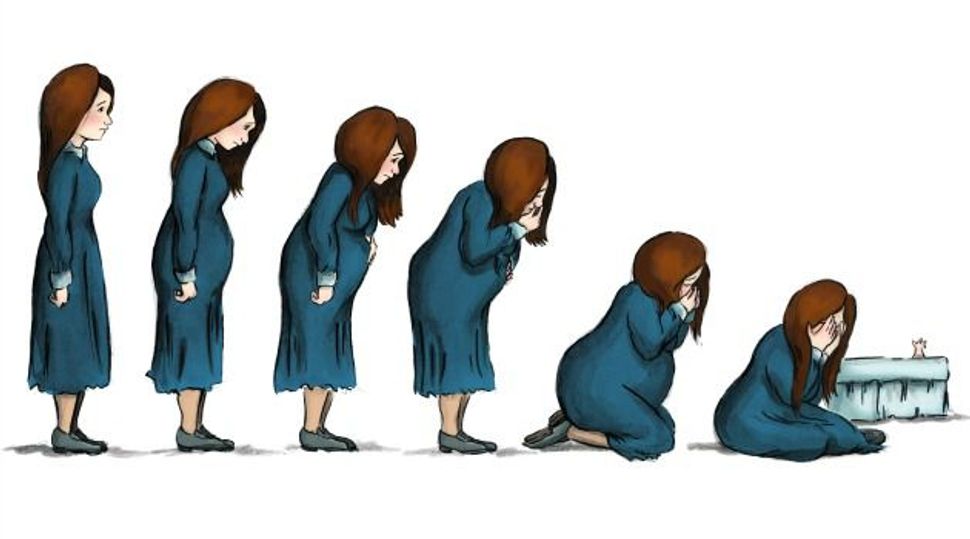 This is the thing you didn’t know: that motherhood is not all joy; that birth leaves scars forever; that often you will feel no love, only desperation.

This is the thing you didn’t know: That pregnancy could fill you with that much dread, that you would weep from misery and they would call it postpartum depression, that motherhood sometimes completes you and sometimes tears you apart.

Because this is the thing they did not tell you: that you would love your children but hate your life; that when they leave for a day, you won’t want them back; that when the pregnancy test turns blue with a positive result, you’ll cry and you won’t know why, because you’re terrified to tell anyone, most of all yourself, how desperately you don’t want another child.

The guilt will rip you apart.

It is a grave sin for a man to spill seed, one punishable by death according to our rabbis. But women face similar restrictions. Birth control obstructs sperm and prevents new souls from being born. A wife who takes it is a dangerous sinner, a damaged vessel. Such a Jew does not have a place in paradise.

The world out there is barren and gray, we were told, filled with lonely gentiles leading lonely, empty lives. Only our world is filled with joy and laughter. Only here live happy men and happy women, walking down the streets with many happy children.

I knew many such families of 10 and 12; I knew the hustle and bustle of their lives. I myself came from a family of just six. When my best friend’s mother brought home a seventh child, I demanded from my mother that she have more, too. But she just laughed and said that it was all up to God, and I wondered if God liked my family less than He did the others.

In the summer bungalow colony I met Rivky, who had 13 siblings and who shared with me the brownies her older sister had baked. She said she wished she had a tiny family like mine — I must get everything I ever wanted. I offered to trade her one half of my gold earring set for her entire brownie. She agreed. I lay on the grass munching, my right earring hanging on Rivky’s left ear. Rivky told me that she planned to ask God to give her only six children exactly, but I said, “Nah, 13 is much more fun.”

A decade passed. I was 18 years old and engaged. For months I shopped, prayed and prepared for the family I would shortly bear. Walking down 13th Avenue, I’d gaze into the window of Mimi’s Maternity Shop, smiling blissfully at women pushing double carriages, a line of perfectly dressed children trooping behind. I strolled dreamily past Little Loungers and Mega Baby Furniture, my life laid out in front of me, certain and reassuring.

My first child came when I was 20 years old. I was on my way to becoming a holy vessel, every inch of me pregnant all the time. So I don’t know how it could have happened. God could not have meant it that way when he stopped my second pregnancy.

It was shortly after the shock of the first. By then, still recuperating from the wounds of childbirth, I knew that the joy of motherhood was there, even if I couldn’t feel it. The women around me said it was normal to be miserable and overwhelmed. It was merely postpartum depression, an ordinary part of the childbirth routine, something that would go away soon, just in time to have another child.

I waited for the shock to leave and for the joy to come. I did not allow myself to feel the dread seeping into my mind as my life closed in on me like a dark tunnel. I became pregnant a second time. My son was 8 months old.

Everyone congratulated me. I knew I was happy, because they told me I was. I was a vessel, a holy, pure vessel, and I gave life to souls.

But God must have known. It is impossible to hide such things from heaven, and perhaps it was because of this that He decided to test my faith.

I was in the seventh month of my second pregnancy, swollen and tired. I lay on the table in my doctor’s office for a routine checkup. I stared up at the sterile ceiling, teeth clenched, as the doctor moved the ultra-sound probe slowly over my abdomen. He was taking longer than usual, and I could not understand why.

I wanted him to stop already. Finally, he did. He stood up and looked down at me. He said something. I did not hear him at first.

He said this several more times, because I did not respond.

I remember sitting up and walking out. I remember calling my sister on the way home. I remember my family and friends at home, their shock and grief, how they reached out to me, their lips moving, their words soothing, but I never heard a sound.

I remember the stunned shock. Because I could not make the sorrow come. I did not know how to fight the force of relief that swept through my entire being when I heard that the baby was gone.

I didn’t want to feel this way. I wanted to be devastated. I wanted the sorrow to tear through me, to make me wail and cry for my lost child. But it didn’t. My heart had betrayed my programmed mind. The ideology I believed in was crushed by a reality that was forbidden, a woman who did not want another and another child. I was a traitor; the things I felt did not match the things they said I should feel. I was a damaged vessel.

The day after the doctor visit, I gave birth to a stillborn fetus. Heavily medicated, I remember little of what happened. It was only two days later that I sat on my bed at home and wept, as the milk dried up in my breasts and the guilt wrapped around me in a deadly embrace.

The doctor said that I should be on birth control for six months. After five months, though, my rabbi told me that it was enough, and I was so scared that God would punish me, leave me barren forever after what I’d done, that I immediately agreed, begging the heavens for another child.

Within two months, I was expecting. I remember the relief, following by panic, and how I collapsed on the bathroom floor. I remember speaking about it to Rivky, the friend I met years ago at the bungalow colony. We sat in her kitchen, watching our children run around and play. She told me that she also had those feelings, but that her rabbi had reassured her that there was no need to worry: It was postpartum, too, the kind that sometimes comes months before birth instead of after it. It was nothing to think about. It would go away in time to have another baby.

I gave birth to my second child and then my third. Rivky, sometime after, birthed her fourth. I remember when Rivky told me she sat for hours in a bath of boiling water after missing her period, not because her cousin Frady said it worked for her — Frady wasn’t pregnant anymore after that — but for other reasons that Rivky couldn’t remember. An infection. She liked boiling water.

I met Rivky later on; she was heavily pregnant. She smiled at me sheepishly, and I saw the tired look in her eyes. After her sixth birth, her postpartum depression never left. It was her dazed expression, her pretty, young face staring blankly at me from under the influence of tranquilizers and anti-depressants, that finally made me see the things they never told us: that motherhood cannot complete you if it consumes you, that our lives are worth more to God than any wasted sperm and that the real sin is to believe that the unborn soul is more important than any mother’s life could ever be.

I became a person the day I stopped being a vessel. It is difficult to describe the sense of wonder, the freedom of stepping out of survival mode and into motherhood. I learned the joy of children because I could finally be a mother, because I could devote my energy to the three children I had, not to the ones I still needed. And for first time, I began to feel complete.

It is nearly 10 years now since I gave birth to a stillborn, nearly five since I witnessed Rivky’s breakdown. I had never wanted to write about it, never planned to look back at what I wanted to forget. And I would never have done so, if not for the picture.

It was an innocent conversation with a close family member two months ago. I don’t know how it came up, but at some point she told me about the photo of my stillborn baby.

“The doctor took a picture after birth and gave it to us…. You never saw it. It was hidden from you….”

And she told me that the baby who died had been perfect.

“He was beautiful. He was a perfectly formed infant. He had chubby cheeks; these tiny, perfect fingers; soft tuft of hair… he looked like your other babies, adorable, like a tiny doll….”

And suddenly I was there, thrust back to the person I used to be. I was that girl, trying to survive the prison of her own mind, trapped by the things they did not tell her. But now it was 10 years later, and I could grasp the horror of what happened. The force that had swept through me returned, and it knocked me out completely, because the relief had turned into shock and grief. For the first time, I cried for my perfect child.

It’s been many weeks since I learned about the picture, the one I cannot bear to see. There is a hole tearing my heart. I grieve the loss of joy and life, of motherhood stolen and brutalized; I grieve the loss of reason and sanity, of the lives of girls, barely women, helpless in the face of religious law.

Judy Brown wrote the novel “Hush” under the pseudonym Eishes Chayil. “Inside Out” is her essay series about life in the ultra-Orthodox world. It is based on true events, but her characters’ names and identities have been changed. Some are composites, comprising several real-life people. Visit her on Facebook at Facebook.com/JudyBrownHush