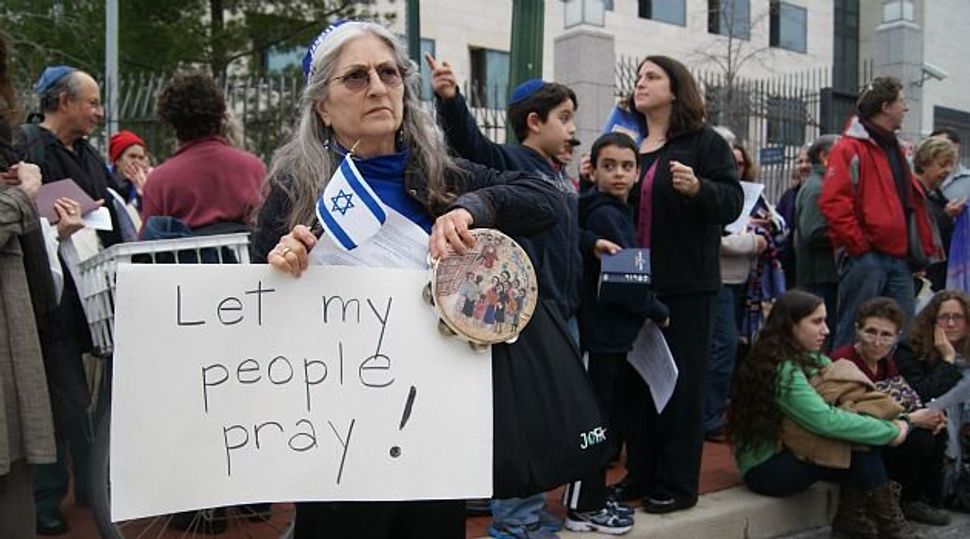 Gimme Prayer: Demonstrators outside the Israeli embassy in Washington backed women?s right to pray at the Western Wall in Jerusalem. Image by nathan guttman

The struggle over the right of women to pray as they wish at the Western Wall has reached the U.S. as American Jews on Monday kicked a nationwide series of protests over the emotive issue.

More than 100 protesters gathered Monday evening outside the Israeli embassy in Washington to show solidarity with the Women of the Wall, which holds monthly civil disobedience protests at the kotel over restrictions on women’s prayer.

WATCH the Forward’s video story about the Women of the Wall support rallies.

It is not every day that Jewish activists openly protest the Israeli embassy and organizers sought to make clear they did not seek a fight with the state of Israel.

“We’re actually not protesting Israel — we’re all supporters of Israel,” said Judith Gelman, chair of Ameinu, a liberal Jewish group, and one of the organizers of the Washington event. “What we’re fighting for … is the rights of Israelis to celebrate Judaism in a pluralistic way.”

“It isn’t really a protest, it is a show of solidarity with a specific group of people in Israel,” she added. 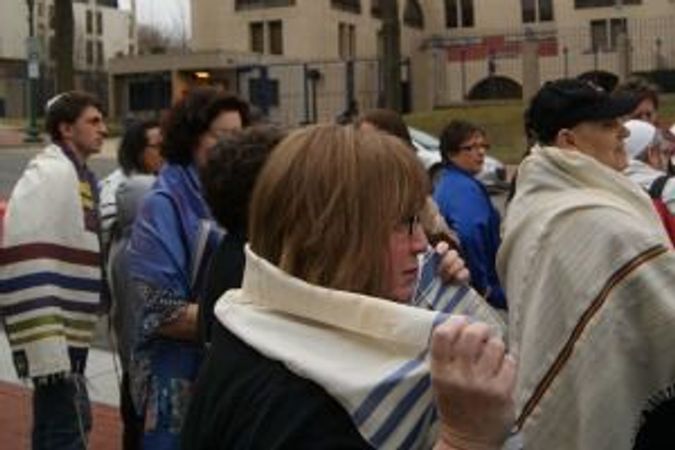 Participants included members of local synagogues, activists with the New Israel Fund and from other Jewish organizations that had taken a stand in support of women’s right to pray at the Wall.

On Tuesday, rallies were planned in support of the Women of the Wall in New York’s Union Square and outside the Israeli consulate in San Francisco.

The protests could be significantly more antagonistic in Jerusalem, where ultra-Orthodox residents have called for mass protests against this month’s prayer session.

Billboard signs posted in ultra-Orthodox neighborhoods in Jerusalem called on residents to “save” the wall from desecration by the women seeking to pray wearing a talit, the traditional Jewish prayer shawl.

Israeli police have intervened to arrest women during past protests, including last month when they detained Rabbi Susan Silverman, the sister of comedian Sarah Silverman, along with the rabbi’s teenage daughter.

In Washington, the Israeli embassy chose to embrace the protesters, sending the embassy spokesman Aaron Sagui to greet the women and men gathered across the road.

“We respect you, we respect the way you delivered your message,” said Sagui, adding that the Israeli government is interested in a dialogue with the Diaspora Jewry over the issue. “We want to find a way to co-exist as the sisters and brothers that we are,” he said.

In a symbolic act of solidarity, protesters outside the Israeli embassy wrapped themselves in prayer shows and read aloud a prayer for the women in Israel.

Anat Hoffman, chair of Women of the Wall in Israel, sent a letter to participants thanking them for coming out to express support.

“As we prepare for possible violence as a result of this incitement,” Hoffman wrote, referring to the calls in ultra-Orthodox neighborhoods of Jerusalem to take to the streets against the women, “we gain an immense amount of strength and comfort from known that you are with us.”

The American protests are part of an effort to raise the temperature on the issue, which has so far not received much attention in Israel itself.

Jewish organizations and activists in the Diaspora have raised in the past in conversations with Israeli leaders and diplomats.

But so far, all Israel has done is to form a committee chaired by Natan Sharansky, head of the Jewish Agency, to examine the issue.

Under Israeli law, the Western Wall is under the administrative responsibility of a body dominated by the Orthodox rabbinate which ruled women are limited to a segregated part of the wall and are not allowed to wear prayer shawls if they resemble the shawls worn by men.