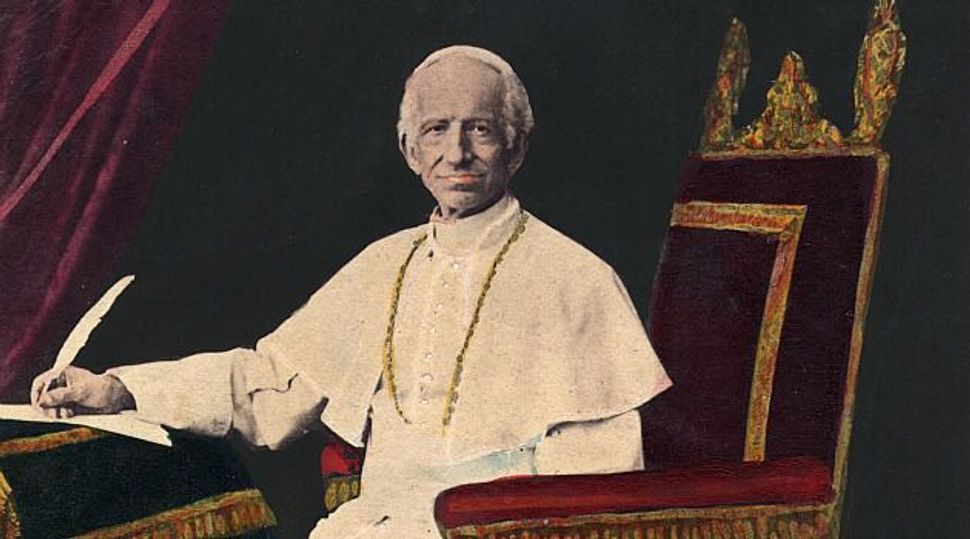 Lion of Rome: Pope Leo XIII was a progressive pontiff during the turn of the 20th century. A new pope might choose that name to signify a liberal bent. Image by getty images

Even before he utters his first words in public, the new pope who emerges from the conclave this week will send Roman Catholics around the world a message encoded in the name he chooses.

It may not be one they immediately understand. Picking an unlikely one from the distant papal past – for example, Hilarus or Zephyrinus – would send Catholics scurrying to their history books to see what it could mean.

But one harking back to modern popes – Benedict or John Paul or John – would signal right away the new leader of 1.2 billion faithful wants continuity with the papacy his name refers to.

One name making the rounds in Rome before the 115 cardinal electors filed into the Sistine Chapel for their conclave on Tuesday was Francis, a name Boston’s Cardinal Sean O’Malley might take if he emerges as the new pontiff.

O’Malley is a Franciscan friar who prefers the brown habit and white rope belt of his Capuchin order to his red cardinal’s finery. No pope has ever taken the name of Saint Francis of Assisi, the 13th century reformer who lived in poverty and told followers: “Preach the Gospel always, if necessary use words.”

Leo – Latin for “lion” – tops a list of bets placed with Paddy Power, a Dublin bookmaker putting odds on the next pope, his name and age.

The name has a progressive ring because the last to choose it, Leo XIII, helped adapt the Church to modern thinking about the industrial age during his papacy from 1878 to 1903.

His encyclical “Rerum Novarum” (Of New Things) was the first on social justice and defended the rights of workers. It argued that both communism and capitalism were flawed and that the state must work for the common good of all its citizens.

The preferential option for the poor that it advocated became a rallying cry in Latin America, which is why a candidate from the region – Brazil’s Cardinal Odilo Scherer is the one most frequently mentioned – might choose this evocative name.

The name will first be heard when a fellow cardinal emerges on the balcony of St. Peter’s Basilica to announce “habemas papam” – we have a pope – to the crowd gathered in the square.

Pius, last used by Pius XII from 1939 to 1958, would signal a staunch conservative while John, which recalls his successor John XXIII from 1958 to 1962, could refer either to a compassionate pastor or a reformer.

John XXIII was a jovial type who convened the Second Vatican Council (1962-1965) that led to some reforms the last two popes rejected and devoted their papacies to reining in.

Milan’s Cardinal Angelo Scola, another top contender, might choose Pius, the second name in the betting list. In a sermon on Sunday, he said the next pope should guide the Church “in the footsteps marked by the great popes of the last 150 years”.

There were four popes named Pius in the last century and a half, all of them distinctly conservative and believers in a strong centralised papacy with the most recent of them still a figure of controversy over his role during World War Two.

While the name might imply a strongly orthodox papacy to Catholic prelates, Jews would most vividly recall bitter inter-faith debates over Pius XII and accusations he failed to stand up to Hitler and Mussolini during World War Two.

Defenders say Pius XII did as much as he could to defend Jews against the Holocaust, so taking the name could identify the new pope as one of a conservative group that has pushed for him to be made a saint. Jewish groups have urged the Vatican not to canonise him, at least until wartime records are clearer.

After his election in 2005, German cardinal Joseph Ratzinger said he chose the name Benedict to honour Saint Benedict of Nursia, “whose life evokes the Christian roots of Europe”, and Pope Benedict XV who sought reconciliation during World War One.

The Latin maxim “nomen est omen” – a name is a sign – is as valid today for popes as it was for ancient Romans whose emperors took new names or titles when they assumed power.

Key figures in the Bible also changed their names, including Saint Peter the first pope and Saint Paul, the missionary to the Gentiles, so there is a Christian precedent as well.

The first pope known to have changed his name was John II in 533. He was called Mercury by his family but thought the Christian pontiff should not have the name of a pagan Roman god.

This became more common after an 18-year-old with another pagan name, Octavian, was chosen in a rigged election in 955 and decided to take the name John XII. A man named Peter opted for Sergius IV in 1009, avoiding comparison with the first pope.

Cardinal Angelo Roncalli reportedly spent the evening before his election as John XXIII in 1958 thumbing through a list of popes to check what earlier Johns had done. He chose the name because his father had it and it recalled the Apostle John.

When Albino Luciani was elected in 1978, he took the first double name in papal history, John Paul I, to show he wanted to combine John XXIII’s reforms with the more traditional stand of his immediate predecessor, Paul VI (1963-1978).

It is unlikely another pope will call himself John Paul any time soon. If Wojtyla goes down in history as John Paul the Great, as his supporters call him, a successor taking his name could risk being known as John Paul the Less.