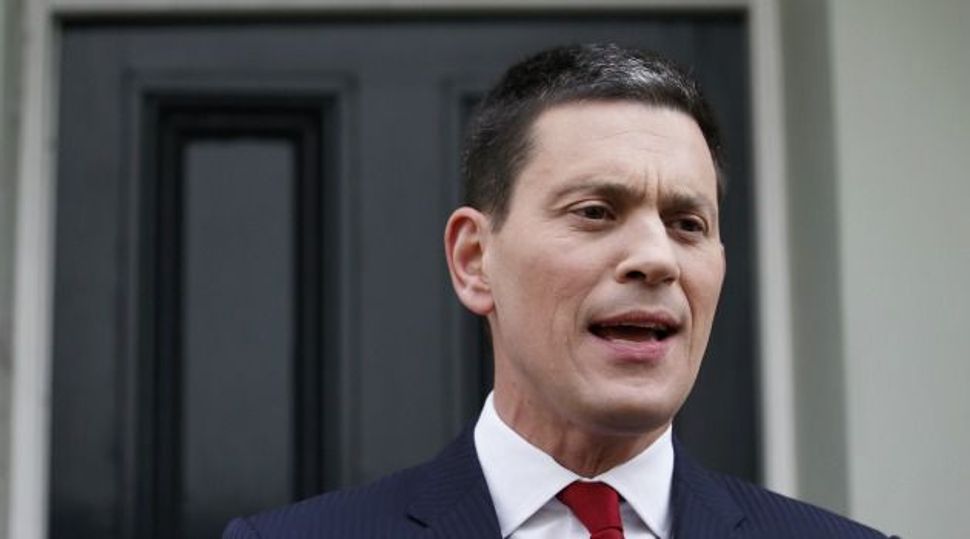 David Miliband, the former British foreign secretary who lost an unusual leadership battle with his brother, Ed, is quitting politics. He is moving to New York and will run the International Rescue Committee, which promotes the rights of refugees. Image by getty images

Former British foreign secretary David Miliband, once tipped as a potential prime minister, said on Wednesday he was leaving politics to boost his brother’s chances of leading the opposition Labour party to victory in an election in 2015.

His departure ends speculation he might replace brother Ed Miliband as Labour leader between now and 2015 if his sibling falters. But the move was also seen as a sign he did not think it likely that Ed would win.

David Miliband, 47, had already retreated from frontline politics after narrowly losing a Labour leadership election in 2010 which pitted him against Ed, 43.

The battle between the brothers gripped the British political world. David was viewed as the more gifted politician and most Labour MPs backed him, but the trade union movement, the bedrock of Labour support, tipped the vote in favour of Ed.

Miliband said he was stepping down as a Labour MP to take up a job in New York as head of the International Rescue Committee, a global humanitarian aid organisation. The brothers’ parents were Polish Jewish refugees who fled the Holocaust.

Although Labour is 10 points ahead of the ruling Conservative party in polls, many MPs think the lead should be much greater at this stage in the election cycle given the grim state of the economy.

They are concerned the party is still not trusted on the economy by voters. Some Labour supporters also think Ed Miliband has been slow to prove his credibility and polls show many voters cannot imagine him as prime minister.

David Miliband said on Wednesday his decision to leave British politics altogether would boost Labour’s chances of winning the next election by ending speculation he was waiting in the wings to stage a comeback if his brother was ousted.

“I know that the country faces very big challenges,” he told BBC TV. “I want Labour to be able to address those issues in an uninhibited way and I think that with my departure that can now happen.”

He said he feared being a distraction to the main task.

Allies and detractors said they thought his decision to relocate to the United States was a sign he believed his brother would not win the next election and therefore be able to give him a high-profile job in any new government.

“It does show a lack of confidence about Labour winning the next election,” Peter Bone, an MP in the ruling Conservative party, told Reuters. “If he thought Labour had a good chance of winning he would have stayed. He clearly has doubts whether Ed Miliband can win.”

An online poll in the left-leaning Guardian newspaper showed most readers thought his move was a bad thing for Labour but a good thing for his brother as it removed a possible threat to his leadership.

Miliband himself was downbeat on his party’s prospects.

“I think the party’s doing well under Ed’s leadership but he’s the first to say it’s a long climb and we never underestimate that,” he said.

Former Prime Minister Tony Blair, to whom Miliband was close, said he was young enough to re-enter British politics.

“I hope and believe this is time out not time over,” Blair said in a statement.