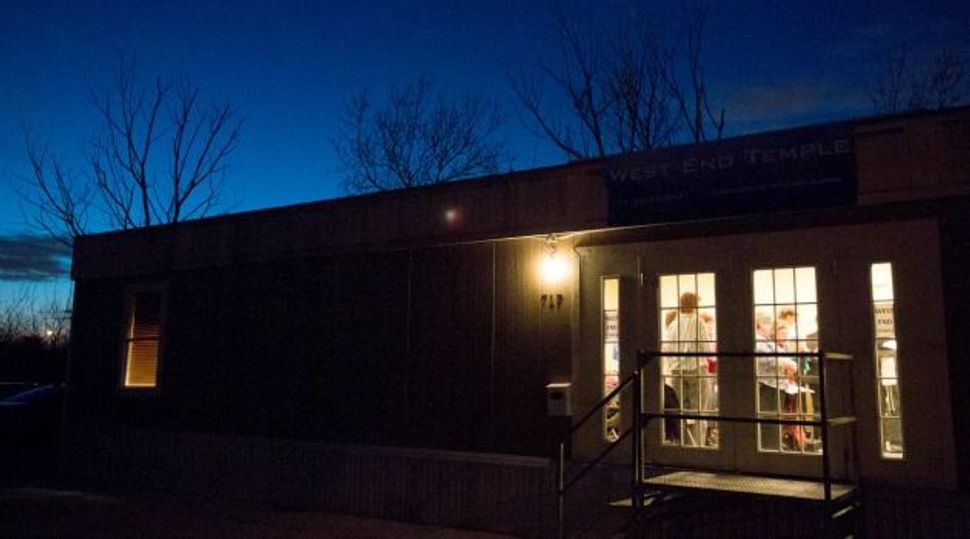 Haunting Sight: Nearly six months after Sandy, the West End Temple in the Rockaways is still holding services in a trailer in its parking lot. Image by claudio papapietro

On a recent Friday evening, Shabbat services at the West End Temple in the Rockaways was literally humming.

The vibrations weren’t emanating from members immersed in prayer. They came from a diesel generator that powers the 50-foot-long trailer where services are being held since the congregation’s sanctuary suffered severe damage from Hurricane Sandy.

Nearly six months after the storm struck, about 20 worshippers attend weekly services inside the trailer, which sits in the parking lot of the damaged main building. The organ blares incongruously in the cramped space. A stack of donated prayer books sits in a corner. In the bathroom, congregants can flush the toilet by stepping on a pedal. Above the sink, a sign warns that the water is not suitable for human consumption.

Humor helps keep Slome afloat as her synagogue faces millions of dollars in repairs and some of her congregants remain displaced after the storm.

Ninety-year-old Evelyn Weber was more straightforward about the storm’s impact.

“I’m teaching you a Jewish word. This was a real umglik — a tragedy,” she said. “In addition to things that were worth money, just all the things you had to throw away, [photographs,] the memories of being here that we lost, you can’t replace your whole life history.” 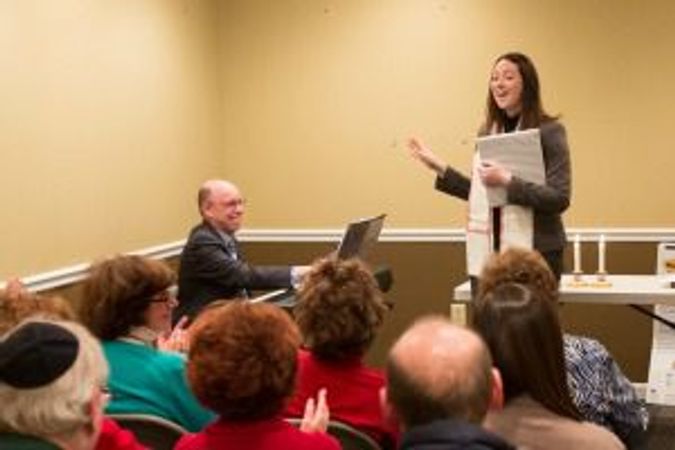 As the season turns, and the region tries to put Sandy behind it, the trailer-bound congregation at West End is a testament to the storm’s lingering damage and to the painfully slow path to physical and spiritual recovery.

Despite being shoehorned into a space about one-tenth the size of the old sanctuary, Slome does her best to make her temporary location feel like home. The rabbi arranged trays of cookies and placed a loaf of challah between two candles, along with bottles of Manischewitz wine, on a folding table during the service the week before the start of Passover. Three rows of five folding chairs waited for worshippers.

Musical director Stuart Rauch practiced on an electric Yamaha keyboard with student cantor Amanda Winter, who would be performing a selection of songs from her recent senior recital at Hebrew Union College-Jewish Institute of Religion. The acoustics were far from adequate: The keyboard was noticeably loud inside the small space, and Winter had to step outside to find the right range for her voice in the smaller setting.

As the sky darkened, congregants began arriving shortly before 7:30 p.m. Each new arrival embraced Winter, Slome and other members. Some were coming back to services for the first time, while others were just thankful for the respite from their bills and repairs.

“Even though we’re in a trailer, it gives you a little peace for the little time we’re here…. You can go to a nice place rather than thinking about all the other things: fighting with the insurance company or FEMA, trying to get together the paperwork you need to get a few pennies back for expenses that were horrific,” Marsha Weber said.

Weber said flooding in the basement of her house in the Rockaways reached 5 feet. She is also the sole caretaker of Evelyn Weber, her mother. They’ve lived in the same house for 40 years.

Evelyn Weber, who moves around with the aid of a walker, struggled to climb up the steps to get into the trailer, as there is no ramp. Hard of hearing, she sat by the door, handing out prayer books.

The number of congregants has been rising slowly in recent weeks. Before the trailer was set up in late February, the congregation held services in members’ living rooms.

“People who come to services say things like, ‘I needed this so much,’” Winter said. “Services mean a lot more to people now than they used to. You have your few who are losing faith in God and in religion a little bit, but I think if anything, it’s bringing most of them closer together to God.”

Slome said that she has discussed with members of the Torah study group the importance of regaining normalcy after suffering trauma.

“Friday night and Saturday morning [programming] is ritual for some members of our congregation,” she said. ”It’s their anchor. There’s one woman who was homeless who came down and she’s had to relocate, but the temple is still part of her weekly ritual.”

During services, Slome sits next to the front table with the candles, leading the congregation in prayer and song, while the lights above occasionally flicker as the generator increases or decreases in noise. The group members sing and clap along to songs like “V’Shamru” and share thanks in celebrating Passover.

“I think one good thing about being in here is, you can actually hear everyone singing,” Winter said. “When you’re in the big sanctuary and there’s this number of people, it feels much less. It’s kind of exciting when you see we have to put down more chairs than were originally out there. It feels like a large, tight group that’s worshipping together.”

Jill Hunziker, a Rockaways resident, said she enjoys how Slome can inject humor into a service while relating to a wide audience that is not necessarily strictly observant.

“She really makes it easy for lots of people who may have been more assimilated Jews, or those from intermarriages,” Hunziker said. “She allows the tent to be really big.”

During the service, Slome compared the story of Passover to the storm. “Many of us felt like we walked into the Red Sea,” she said to her congregation, “and it didn’t part for us. But we are a people who go back a long way and know how to deal with challenges.”

Few in the Rockaways remember many challenges like the one posed when Superstorm Sandy rolled ashore last October 29.

Although the wind and rain did little damage at the West End Temple, which had a membership of around 100 people, the rising floodwaters submerged the entire sanctuary in several feet of water. When Slome arrived hours after the storm passed, the pews were still completely underwater.

Even today, watermarks that reached up to 5 feet on the glass entry doors have not yet been cleaned. The floors of the sanctuary and gymnasium were completely stripped off, with the dirt underneath exposed. Walking on the ground in these rooms felt like walking across the sandy Atlantic Ocean beaches less than a half a mile away.

When Slome walks through the building now, she does her best to shield the pain by pretending that she’s walking back in time. It’s like “walking into an archaeological dig,” she said.

Few mementoes of the once vibrant synagogue can be seen inside the ruined building. The rabbi’s office was once lined with file cabinets full of documents, but now it is dark and empty, with lights hanging from wires. The kitchen, where banquet meals were once prepared, is barren of food items. Even the American flag in front of the building is tattered and worn, looking as if it had done battle.

The building is still months away from being usable, even if the repairs go according to plan.

Meanwhile, the cost of operating the trailer is a huge burden on the small congregation. UJA-Federation of New York and the Union for Reform Judaism helped pay to install the facility: The URJ has already disbursed $29,403 to West End and pledged a total of $90,000 for the synagogue. But the high costs of running such a small space have been unexpected. For example, Slome estimated that it costs almost $600 per month just to operate the bathroom.

Still, the members all say they are certain the congregation will survive and that they are looking forward to moving back into their old building.

Slome is dreaming of bigger and better things. Once the synagogue is rebuilt, she hopes to reach out to the broader Jewish community of the Rockaway Peninsula by diversifying the programming. Several local Jewish congregations have not reopened since the storm struck.

“Our building is a jewel,” said Slome, who added that the synagogue used to host meetings of the Girl Scouts and Weight Watchers, among other community groups. “It is a diamond in the really, really rough right now. But we need to look at ways to make our building meet the needs of the local community, especially the Jewish community.”

At the end of the recent Sabbath service, the congregation sang “Adir Hu.” Originally, Slome planned to hand out copies of the lyrics to each member, but there wasn’t a working photocopy machine. Instead, the lyrics were written on a large yellow pad and hung on the wall.

Marsha Weber announced upcoming services and programs and where they would be held — each ending with the phrase “in the trailer.” A chorus of laughter grew with each mention of the term.

Cynthia and Bob Hellerman said the Spartan surroundings did not matter to them. They were even intrigued to see how the synagogue was managing in the makeshift space.

“My husband said, ‘I got to see what this trailer is like,’” Cynthia Hellerman said.

She said the services are all the more important because the storm recovery kept neighbors busy throughout the winter.

“We really didn’t see a number of these people, and we weren’t aware where they were for quite a while,” Hellerman said. “We didn’t have phone service here, electric. We couldn’t make contact with people. It’s like a little family has gotten together again.”

As the memory of Sandy fades, Bob Hellerman realized it was important for him to take part in services in the temporary trailer, in the shadow of his empty synagogue.

He wanted to savor the unique communal bonds that — ironically — the devastation of the storm helped build.

“It’s like a part of history — it’s going to disappear,” he said.

Even when shell-shocked residents lined up in the days after the storm for laundry detergent and canned food at disaster tents, Bob Hellerman said it was good to see neighbors bonding as one. The tents from FEMA, the Red Cross and the electric company are long gone. But the synagogue’s trailer is still there.

“People from all over the Rockaways would come, and now it’s gone,” he said. “And this will be gone, too, but it’s nice to be here while it’s here.”