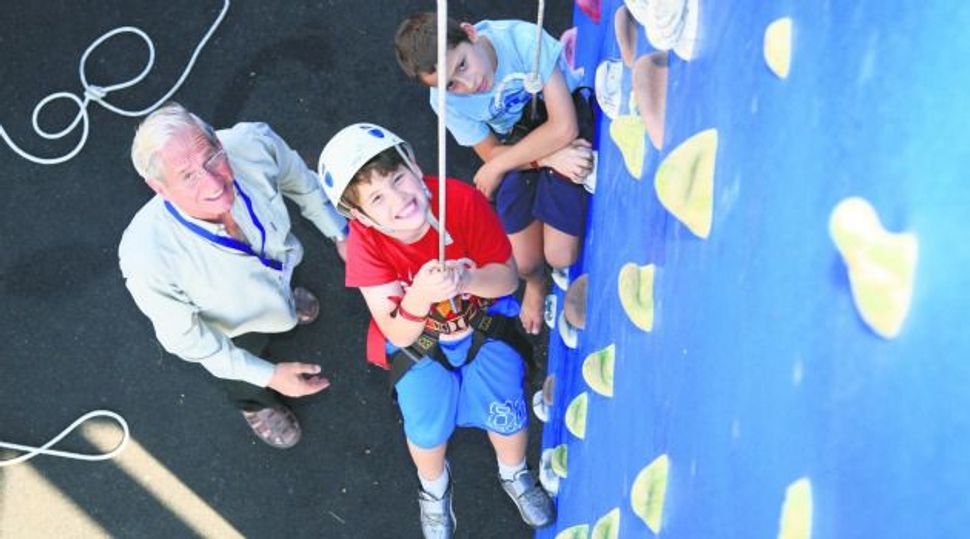 Most people know Chaim Topol as Tevye in “Fiddler on the Roof.” But to a group of sick Jewish and Arab children in the Galilee, Topol is their biggest cheerleader.

Israel’s first international movie star was instrumental in the creation of the Jordan River Village, a camp for children with serious and life-threatening illnesses. He currently serves as the chairman of the organization’s Israeli board.

The American actor Paul Newman was the inspiration behind the camp. In 1988, Newman founded the Hole in the Wall Gang Camp, a summer program in Ashford, Conn., designed to give sick children the opportunity to play in a therapeutic camp environment.

Over the past 25 years, 30 similar camps have been established around the world to comprise what is now called the SeriousFun Children’s Network. Hundreds of thousands of sick children have attended the programs, which are free, regardless of the family’s ability to pay.

Talk of starting a multifaith camp in Israel surfaced in the late 1990s when Murray and Marilyn Grant, an older Jewish couple, attended a benefit for the camp in Ashford and decided to initiate a similar project in Israel. They eventually raised $28 million, getting Israeli and Jewish stars involved along the way. Newman himself wrangled Topol into helping out.

“Back in 2001, I got a phone call from Paul Newman inviting me to join him on a visit to one of his camps in Cincinnati,” said Topol, who is 77. “When I saw that amazing place, I immediately understood we had to do something like it back in Israel, and that’s how my involvement began.”

The two-time Golden Globe-winning, Oscar-nominated star of “Fiddler on the Roof” — who played Tevye both on the London stage and in Norman Jewison’s 1971 movie — threw his energy into raising the profile of the project internationally. Serious momentum began to build behind the idea when senior Israeli politicians got involved, such as former cabinet minister Isaac Herzog as well as current president Shimon Peres.

“In 2005, Shimon Peres called me late one night and told me to be ready to pitch the idea of the JRV the very next morning, asking for the government’s blessing and an allocation of land in the Galilee” for the Jordan River Village, Topol recalled. “I showed them a short presentation and… there and then, with unanimous agreement, the 60 acres was donated.”

Later that day — after the land for the JRV had officially been granted — then-Prime Minister Ariel Sharon formally dissolved the Likud government to create the Kadima Party. Suddenly, Topol understood Peres’s haste.

In 2012, the Grants stood alongside Topol at the official opening of the Jordan River Village. In a tragic twist, Murray Grant passed away on the flight home to the US the day after the opening ceremony. Newman didn’t live to see the project come to fruition; he passed away in 2008.

“Paul wanted to be here for the opening of our village, but unfortunately he had a prior engagement,” said Topol, glancing Tevye-like at the heavens.

Most of the doctors, specialists, and nurses working at the Jordan River Village donate their time to support and care for children who suffer from cancer, heart conditions, cerebral palsy, cystic fibrosis, epilepsy and HIV, among a wide variety of illnesses and conditions.

Topol described how an illness called thalassemia, a genetic blood disorder that primarily affects people of Arab descent, proved a factor in helping to integrate the Arab and Jewish contingents at the camp.

“We noticed that 80% of those registered for the group with thalassemia were Arabs, while the other 20% were Haredim,” he said. “We were worried that things might not work out, but when we called the Haredim to tell them they would be in a minority and be sharing the week with Arab patients, they said, ‘So what’s the problem? We see each other at clinics. We talk together all the time. We’re all friends.’”

The first thalassemia group was such a success that many local Arab medical professionals decided to join their Jewish counterparts and volunteer their time to support the project.

Topol spends as many as three days a week working at the village, splitting his time equally with the staff, the volunteers and the children.

Campers engage in a range of activities, from arts and crafts to horseback riding to swimming to camping out in a “Bedouin tent.” The village has Israel’s first handicap-accessible adventure course with a zip line, a climbing wall and a ropes course.

Among the volunteers are Arab Israelis doing national service and Jewish Israelis volunteering before they join the army. On a recent visit to the camp, Bassell Halil, an 18-year-old Arab from the Galilee village of Gush Halav, and Tomi Vardi, a 23-year-old Jewish volunteer from Binyamina, were leading a group of diabetic kids when Topol stopped to join them at the climbing wall.

“I’m here on national service,” said Bassell. “We spend time learning about the conditions before the children arrive. What joins us together is the illness, not race or religion. No one cares if you’re Jewish or Arab, but we do chat together and learn a lot about each other’s cultures.”

Tomi added, “I worked in a youth center and then heard about the JRV project. When I came to look around and saw what is going on here, I so wanted to be a part of it.”

Topol is looking forward to the opening of a theater on site, at which he will give the first performance. He intends to be a central figure in the ongoing development of the village, and in its efforts to continue to raise funds both in Israel and overseas. A minimum of $4 million a year is needed to maintain and expand the services.

So, at a time in life when many people are taking it easy, might he return to the international stage, once more in the role of Tevye?

“Thank God I’m in good health” he smiles. “It’s hard work. Well, it is, the way I do it! People [play Tevye] different ways, but I try not to do anything different to when I was a younger man. People come up to me and often compare my performances, say in 1975, with what they’ve just seen.”

He glances across the village and with another half wink, adds, “Thankfully, until now, I’m still getting good reviews!”

Paul Alster is a broadcast journalist based in Israel. His website is paulalster