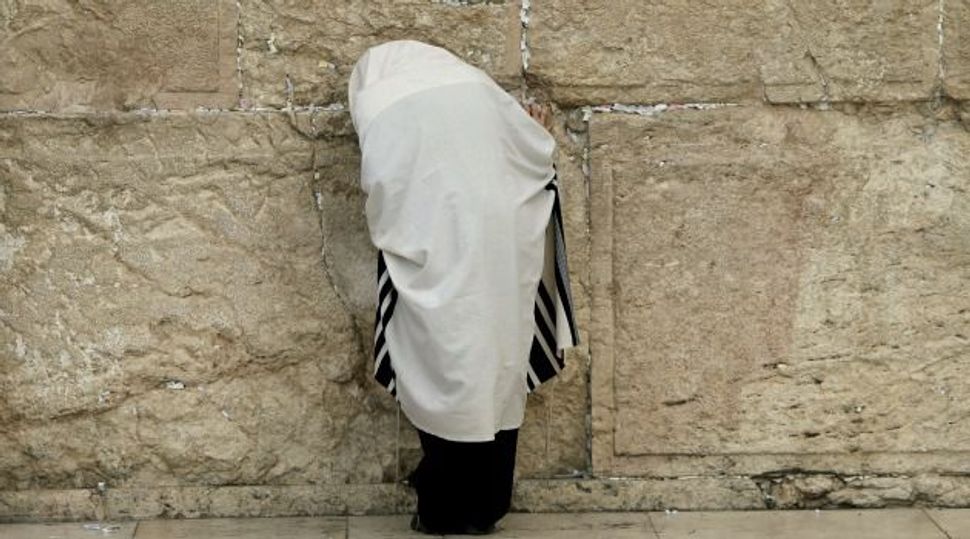 Kotel Drama: Natan Sharansky came up with the proposal to split the Western Wall into Orthodox and egalitarian prayer sections. He needed some help to get it across the finish line. Image by getty images

A dramatic offer to set up a new egalitarian prayer section at the Western Wall in Jerusalem was met with a no less dramatic willingness to compromise on behalf of all the major religious leaders in the American Jewish community.

In a rare show of consensus, activists on the liberal side of the Reform movement agreed to drop their demand for egalitarian prayer in all parts of the Wall, considered the last relic of the ancient Jewish Temple and the holiest place for Jews worldwide. On the other end of the religious spectrum, Orthodox groups agreed not to try to derail the plan, which would allow, for the first time in the history of the modern state of Israel, for men and women to pray together in one section at the Wall and to perform worship rituals not based on the Orthodox interpretation of Jewish tradition.

Even the leader of Women of the Wall — the activists who insist on the right of women to wear prayer shawls and read Torah in the women’s only section and have often been arrested for trying to do so — supports the compromise plan.

Credited for bringing about the plan that could unite American Jews and potentially mend fences with the government of Israel is Natan Sharansky, the former hero of the Soviet Jewry movement and current leader of the Jewish Agency for Israel. Sharansky wrote the proposal after months of shuttle diplomacy among communal leaders.

“This is the first step in our journey, and we hope it will lead to a resolution that will create a stronger unity,” said Jerry Silverman, president and CEO of the Jewish Federations of North America, a communal umbrella organization that played a major role in brokering the deal. Silverman called the consensus emerging around Sharansky’s plan “significant,” adding that it required a show of flexibility on behalf of all sides to the debate. “I don’t know that everyone will ever be satisfied with every issue,” he said.

The road to resolving the issue of women’s prayer at the Western Wall, is, however, still bumpy, and many potential pitfalls await Sharansky as he moves ahead with redefining the physical contours of what is considered to be the heart of Jewish history. After getting the green light from American Jews, Sharansky will now have to overcome political resistance in Israel, alongside myriad technical, archaeological, budgetary, legal and even geopolitical problems threatening to derail the plan.

Sharansky considered the idea of redesigning the Kotel plaza and dividing it into equally sized Orthodox and egalitarian areas shortly after he was tasked three months ago by Prime Minister Benjamin Netanyahu with finding a solution to the escalating dispute with Diaspora Jewry over women’s rights to pray at the Wall. The monthly arrests and detentions of members of Women of the Wall have drawn increasing attention in the United States and were frequently reference by Jewish leaders when meeting with Israeli officials.

This past February, Sharansky met in Jerusalem with a group of rabbis from JFNA’s rabbinical Cabinet and presented them with his thoughts about expanding the prayer area along the Wall. He followed up with a series of meetings and phone conversations with leaders of the Reform and Conservative denominations in the United States, and discussed the idea with Israeli lawmakers and religious leaders.

These talks resulted in a plan, formally presented by Sharansky to the rabbinical Cabinet in a meeting in New York on April 9 and first reported by the Forward earlier that day. It calls for building a new entryway to the Kotel area, which will present visitors with the choice of either going to the left, to the designated Orthodox area, or turning right, to the egalitarian section. The entire plaza will be expanded and will reach the area known as Robinson’s Arch.

The Orthodox part of the Wall will remain as it is now. It will have a divider separating men and women worshippers and will continue to be governed by the Orthodox rabbinate through the Western Wall Heritage Foundation. The egalitarian area will allow members of all denominations to pray freely and will allow family events, such as bar and bat mitzvah ceremonies. The governance structure is still in discussion, but Sharansky suggested that the Jewish Agency and the non-Orthodox denominations would oversee its operation.

In a short statement issued following his presentation of the plan, Sharansky said, “The Kotel will once again be a symbol of unity among the Jewish people, and not one of discord and strife,” and declared, “One Western Wall for one Jewish people.”

In the April 9 meeting, Sharansky did not present Jewish leaders with a map or a model of the new design. He described the outline in broad terms, making clear that many details were still uncertain. The participants, members of the JFNA rabbinical Cabinet in which all Jewish denominations are represented, did not vote on the plan, but it was clear, said Rabbi Stuart Weinblatt, who chaired the meeting, that support for Sharansky’s plan was broad. “The ideas were very well received,” he said, adding that the plan was still a “work in progress.”

The biggest compromise in accepting Sharansky’s outline was made by Women of the Wall, who argue that they should be allowed to wear prayer shawls and read from the Torah in the women’s section at the Wall. Under this plan, such prayer would be allowed only in the egalitarian section. But Anat Hoffman, the group’s leader, is supporting the Sharansky plan.

“It’s not everything we were hoping for, but we will compromise. You don’t always have to be right, you have to be smart, and compromise is a sign of maturity and understanding what’s at stake here,” Hoffman told the Forward.

Reform and Conservative activists raised concerns over the short-term situation at the Wall. Even if Sharansky’s plan is adopted, implementation is expected to take at least two years and perhaps much longer, and leaders of the non-Orthodox denominations are seeking assurances that in the interim, women will not be subjected to arrests while praying at the Wall.

Other significant obstacles also put in question the plan’s feasibility.

It now needs the approval of the Israeli government, and although the new coalition in Israel excludes members of the ultra-Orthodox parties, Netanyahu will need a great deal of political will to push the plan through the Cabinet and the Knesset.

American Orthodox leaders have chosen to keep a low profile on the issue. Agudath Israel announced that it will defer to its “highest religious authorities in Israel,” which in the past rejected giving Reform and Conservative streams a foothold in the holy places.

The Orthodox Union decided not to oppose the plan and chose to focus on the benefits of ending the dispute. Rabbi Steven Weil, the group’s executive vice president, listed the many threats facing Israel and the Jewish people, and expressed his hope that “Jews across the world can focus on these issues and not expend our energies on intra-Jewish hostility and rancor.”

Beyond political barriers, the Sharansky plan faces other obstacles: Expanding the Kotel plaza toward Robinson’s Arch will require building within an archaeological site, a process that could require lengthy excavation work; it could also run into geopolitical sensitivities, since expanding the plaza will involve changes to the MugHrabi Bridge leading to the Temple Mount.

Past attempts to renovate the bridge led to tension with the Muslim Waqf, which controls Islam’s holy sites in Jerusalem. It is also not yet clear whether current Israeli law allows for a religious area, such as the proposed egalitarian section, to be governed by non-Orthodox denominations.

Yet the biggest challenge could be that which is facing the Reform movement. The group, which had sided in the past with Women of the Wall, decided to go forward with Sharansky’s ideas, tilting the balance in favor of adopting the plan.

“We want a resolution that is for the good of all,” said Rabbi Rick Jacobs, president of the Union for Reform Judaism. This compromise reflects, to a great extent, an understanding that the battle over women’s prayer at the Wall is only one aspect of the Reform struggle to establish itself in Israel, and not the one Israelis necessarily view as most important. “There are issues that are deeply experienced here but not so in Israel,” Jacobs said, noting that the call for civil marriage is strongly supported by Israelis but “the Kotel not necessarily.”

Putting the Western Wall issue to rest will allow the Reform movement to focus on its other agenda items in Israel, which include equal funding for non-Orthodox rabbis and religious institutions, marriage equality and ending institutionalized preference for Orthodox Judaism. “We hope that we can go from here to the other issues,” Jacobs said.