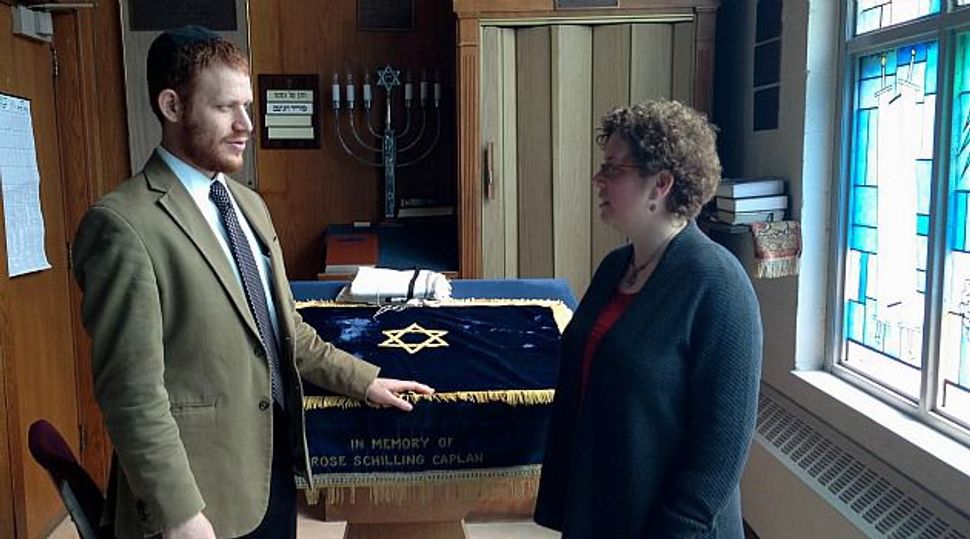 One of the first things Rabbi Alice Goldfinger said as we sat down for our interview is that she would likely forget all about me.

“I’ll know you were here, because the appointment is in my calendar,” she said. “But I won’t remember it. I have no short-term memory. I don’t feel time, so by the way, if we go on too long, you have to tell me.”

It was 10:00 a.m. on a cold wintry morning in Falmouth, Maine, and we were drinking coffee at the long wooden table in her dining room. Goldfinger, 48, has short brown hair, peach skin and tan glasses; a Star of David necklace dangled above the v-neck of her gray sweater. Behind her, French doors opened into a library filled with religious texts, potted plants, a rocking chair and a stand thick with Hebrew sheet music. Photos of her 10-year-old daughter and 12-year-old son hang on the refrigerator.

Everything about Goldfinger appears utterly normal — the passionate way she talks about being a rabbi; her insatiable appetite for helping people; her infectious cackle; even the fact that she is a divorced mother who shares the responsibility of raising her children with their father, who lives in California.

It’s all too easy to forget she has a traumatic brain injury, known medically as TBI.

In December 2009, Goldfinger fell and hit her head, hard, on ice outside Congregation Bet Ha’am in South Portland, where she had served as rabbi for 10 years. Her brain crashed into her skull, injuring the left side of her brain and her visual cortex. (TBIs occur when a sudden trauma damages the brain. The result can be anything from a mild concussion to amnesia, coma, and short- and long-term problems affecting memory, motor function, sensation and emotion.) It wasn’t until August 2010 — after struggling to return to work, and seeing doctors in New York City, where Goldfinger was formally diagnosed — that she finally understood that her career as a rabbi was over. As she wrote on her blog, Brainstorm: “I was really brain damaged. So much so, that I thought I was fine.”

But this terrible trauma — the very kind she had spent her life helping others navigate — led to a remarkable partnership between a Reform female rabbi and an Orthodox male rabbi who transcended the strictures of his faith and observance to welcome a colleague in need.

Goldfinger leaned back in her chair and calmly clasped her hands as she listed the many tragic losses she’s endured since her injury. She left Bet Ha’am and found herself religiously stateless. She went on disability. She can no longer pursue two of her greatest joys: reading and studying. She relies on her iPhone (“the brain I don’t have”) to remind her when to eat. Even attending services — another joy — is challenging, because the combination of people, sounds and commotion makes her feel ill.

“But I need to go to worship the way you need to eat breakfast,” she said.

What was once an auspicious future leading Maine’s Jewish community became an uncertain world filled with passions almost entirely and forever out of reach. But then a hand reached out from the blurry abyss. Rabbi Akiva Herzfeld, of Portland’s Modern Orthodox synagogue Shaarey Tphiloh, straddled the denominational aisle and invited Goldfinger to help him lead Friday night services and say Kaddish for her mother, who died when Goldfinger was 15.

The nine-mile drive to Shaarey Tphiloh from Goldfinger’s home is too far for her to make on her own, so we rode together — past Portland’s tree-lined streets and New England-style homes. Herzfeld greeted us at the synagogue, with open arms and fresh pita made by a local Iraqi refugee. Then he led us inside to talk.

“I tried to imagine what it would be like for me to be a female Reform rabbi. I thought, what if I were her and she was me? I would want him to ask me to lead services,” said Herzfeld, 34, who joined Shaarey Tphiloh, Maine’s oldest synagogue, five years ago. He spoke effortlessly, almost motionlessly, his red hair and pale skin standing out against stained-glass windows behind him. Goldfinger sat nearby, listening to the man who helped guide her spiritual ship of state.

“Women’s issues in Orthodox Judaism are controversial,” he said bluntly, “but it was important to do this for her — for our synagogue to know that we have a rabbi coming and we will respect her, and realize that she continues to be a religious leader even if she doesn’t have the position of rabbi of a large synagogue.”

Goldfinger stared at him with a mix of amazement and deep gratitude.

“I never would have expected you to do that, and the fact that you did —” She paused, sniffling. “You are a bottomless well of empathy.”

Portland is home to a small, close-knit Jewish community where rabbis from the area’s one Reform, one Conservative, one Modern Orthodox, one nondenominational and one Chabad synagogue often work together. That’s exactly what happened on a Friday evening in November 2011, when Herzfeld and Goldfinger stood side by side in Shaarey Tphiloh’s cavernous sanctuary. Seats on both sides of the mechitzah, which separates the men from the women, filled with at least 100 people, far more than the handful or two the synagogue typically draws on Friday nights. With her children standing nearby, Goldfinger led parts of the Kabbalat Shabbat service welcoming the Sabbath, as congregants sang along, helping when her memory failed.

“When she sang, you just got drawn into it and you could feel the spirituality,” said Fran Schneit, a friend and former congregant of Goldfinger.

Since falling, Goldfinger has retained clear memories of life before her accident but has been unable to form short-term memories. Her experience at Shaarey Tphiloh broke the mold.

“It was beautiful. Beautiful enough that I remember that it was beautiful,” she said. “And I remember one other thing. This man came up to me afterwards, an older gentleman, and said: ‘That was great. We should do that more often!’”

Despite the potential for controversy — women are not permitted to lead services in the Orthodox tradition — Herzfeld experienced little backlash. (Although Kabbalat Shabbat is not customarily led by women, Orthodox Halacha has been interpreted to permit it.)

“When I invite[d] her to lead services, it [meant] some people [would] question me,” Herzfeld admitted. “They might say I’m not doing a good job preserving tradition, but it’s more important to stand up for someone who needs you to stand up for them.”

This was one of the only times Herzfeld had ever heard a woman lead services.

“And that’s when he said, ‘One of us had to be uncomfortable; why should it have to be me?” Goldfinger interrupted, referring to a quote she included in her moving nomination of Herzfeld for the Forward’s America’s Most Inspiring Rabbis series, which appeared in March. (Herzfeld was selected as one of 36 rabbis inspiring Jews across the country.)

After I told this story to Rabbi Avi Weiss, dean of Yeshivat Chovevei Torah in New York, where Herzfeld studied (he also has degrees from Yeshiva and Columbia universities), Weiss was silent for five long seconds.

She grew up in a Reform Jewish family on Long Island and in Manhattan, not far from Herzfeld’s Orthodox upbringing on Staten Island. She was ordained at Hebrew Union College-Jewish Institute of Religion and later joined the Union of American Hebrew Congregations as associate director of the Pacific Southwest Council. But before all that, she was a 15-year-old girl watching her family’s rabbi comfort her dying mother.

“He could not cure her cancer, but he sure did heal her pain,” she said. “I really did feel like I wanted to repay a debt of gratitude, to him and to the whole concept of a rabbi: someone who shows up even when the body and mind are doing embarrassing things — things that remind us of our own frailty and how close we all live to the edge.”

She took a deep breath, wiping her tears.

Goldfinger will likely never recover from her brain injury; as she wrote in an email before this story went to print: “I am going to forget about the article. If you know when it will run, I will put it in my calendar to look for it.” Still, she has made progress. She now accomplishes two activities a day, writes on her blog and plays tennis weekly (her instructor is teaching her to hit with her nondominant hand to exercise her brain). This May, she will take a major step: teaching a one-hour class at Bet Ha’am.

“There are parts of myself that died the day I fell on the ice,” she said. “Perhaps something new can grow in its place. In that place.”

Whatever happens, Goldfinger has Herzfeld supporting her — not on the sidelines, but out front and center. What he did for her is beyond forgetting, even for Goldfinger.

“We’ve built a lot of bridges together without intending to build,” she said. “Just Rabbi Herzfeld being himself, he leaves bridges in his wake.”