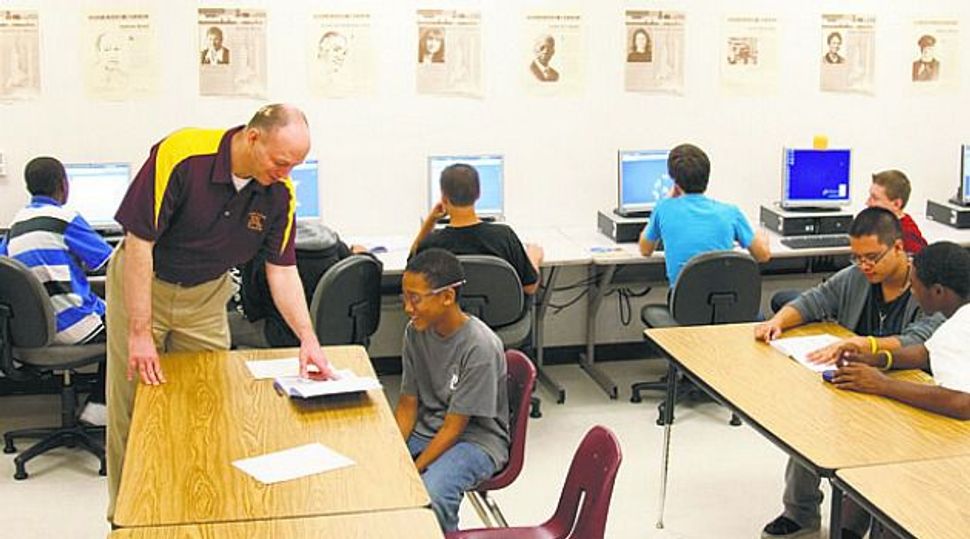 A federally backed program subsidizing Internet access for low-income students has committed more money to schools in the heavily Orthodox Jewish town of Lakewood, N.J. in recent years than to schools in any other municipality in the entire state.

Yet after several years of participating in the E-Rate subsidy program, Lakewood’s schools report having far fewer Internet-capable devices per student than any large New Jersey city, according to a Forward analysis.

Less than one-tenth of the E-Rate money has gone to Lakewood’s public school system, which has one of the worst high school graduation rates in New Jersey. The rest is granted to the town’s private schools, the vast majority of which serve the ultra-Orthodox community.

As well as Internet connectivity, E-Rate funds can also be used for things like telephone systems and voicemail for administrators, but schools in Lakewood report similar numbers of phones in their classrooms, compared to other schools.

Ultra-Orthodox leaders in Lakewood have railed against the dangers of the Internet, especially for young people, raising questions about why the town’s Orthodox schools have benefitted so heavily from E-Rate. One Lakewood Orthodox girls school, Bais Rivka Rochel, reported having five Internet-capable devices in a school of 1,025 students, despite receiving $700,000 in E-Rate subsidies.

“I think it’s unfair,” said J. Michael Rush, a former official with the New Jersey Department of Education and a former public school superintendent who lives in Lakewood, of the large amounts of E-Rate money going to Lakewood’s private schools. “It’s inequality, no matter how you look at it.”

The U.S. Congress created the E-Rate program in 1995 to help financially disadvantaged young people get access to the Web in schools and at libraries. Since 1998, E-Rate has distributed $2.25 billion each year, collected from telecommunications firms, to schools and libraries nationwide. The money is used to reimburse the institutions’ Internet and phone bills and their purchase of some phone- and Web-related hardware. Rates of reimbursement are pegged to poverty levels at individual schools. The program is administered by the Universal Service Administrative Company, a semi-governmental body overseen by the Federal Communications Commission.

Charges of waste and fraud have long followed E-Rate, which was the subject of a congressional investigation in 2005. Recent investigations published in the Forward and The Jewish Week of New York have drawn attention to Orthodox Jewish communities’ exploitation of the program. The Forward reported in February that ultra-Orthodox institutions in Brooklyn that don’t qualify as libraries have received $1.4 million in E-Rate library subsidies. Later in February, The Jewish Week of New York reported that Orthodox schools in upstate New York and in the Brooklyn neighborhoods of Williamsburg, Boro Park and Crown Heights had received millions in E-Rate subsidies despite not providing students with Internet access. The Jewish Week stories also raised questions about possible fraud involving E-Rate service providers to these schools.

The Forward’s latest findings, the result of an analysis of publicly available data, show an apparent imbalance in the distribution of E-Rate funding in New Jersey that overwhelmingly favors Lakewood’s ultra-Orthodox community. The Forward attempted to interview officials both at both private schools and at public schools in Lakewood for this story. None would agree to comment.

The new questions raised about the large amounts of E-Rate funds benefiting the Orthodox Jewish community come as the program struggles to meet its funding requests nationwide, which far outstrip available dollars. The program now rejects requests for expensive services like wiring and network hardware from all but the most impoverished schools, and experts say it could further limit subsidies in the coming years.

Two decades ago, Lakewood was a small New Jersey town with large African-American and Hispanic populations. It was also home to Beth Medrash Govoha, a non-Hasidic ultra-Orthodox yeshiva. Founded in the 1940s, the yeshiva serves as an amalgam of college and graduate school for ultra-Orthodox young men, teaching high-level courses in Talmudic law. The institution is the leading one of its kind in the United States, and enrollment there has ballooned to nearly 5,000 men in recent years.

The growth of the yeshiva spurred a parallel growth in the Orthodox population of Lakewood, and in the size of the town overall. The town’s population grew by 53% between 2000 and 2010, according to U.S. Census data, making it one of the largest municipalities in the state.

Enrollment in Lakewood’s public school system, meanwhile, has remained relatively flat. Yet the growth of the Orthodox community in Lakewood has brought a profusion of private Orthodox elementary and high schools to serve the mushrooming religious population. Those schools began to receive significant amounts of E-Rate subsidies in 2008.

Yet Lakewood’s relative E-Rate success over the past three years has been on a scale unprecedented statewide. Schools and libraries in Lakewood received more in subsidy commitments than any New Jersey city but Newark in 2009, 2010 and 2012. In 2011 the town outstripped even Newark in E-Rate commitments. The $15 million committed to Lakewood schools cumulatively since 2010 is more than twice the amount committed to Trenton during that period and nearly three times the amount committed to Jersey City.

All this was for a township that clocked in at 92,000 people in the 2010 U.S. Census. That’s a third of the size of Newark and Jersey City, which both have populations of roughly a quarter-million people. Lakewood is slightly more populous than Trenton.

Schools receive E-Rate funding commitments based on their requests for particular items and costs that they submit to USAC. The kinds of services they are eligible to have subsidized and the percentage of the cost that USAC will cover are contingent on the income of their students. This, in turn, is measured by the proportion of students who are eligible for free or subsidized lunches through the National School Lunch Program, a federal meal subsidy. That means that cities with larger populations of poor children should receive more in E-Rate funding. Yet Lakewood has only half as many children living in poverty as Newark does, according to U.S. Census data.

The disproportionately high amount of money going to Lakewood schools in recent years doesn’t correspond to similarly high levels of Internet access. Schools receiving E-Rate subsidies are not required to use those funds only to bring Internet into classrooms. They can pay for telephone service, administrative servers, certain kinds of wiring and telephone hardware, and even mobile phones and e-mail addresses. Yet for schools receiving hundreds of thousands of dollars in E-Rate funding, Lakewood’s Orthodox yeshivas report startlingly few Internet-capable devices on campus.

Besides the Lakewood public school district, only eight of the 66 Lakewood schools that received E-Rate subsidies in 2011 report having more than 10 computers or other Internet-capable devices.

USAC, the E-Rate program’s administrator, defended its vetting of Lakewood’s E-Rate applications in a statement to the Forward. “We review all applications under procedures approved by the FCC and based on rules and legislation governing the program,” USAC spokesman Eric Iversen said. “Commitments and disbursements result from this review, which is designed to ensure compliance with requirements for program participation.”

One possible explanation for Lakewood’s success in obtaining E-Rate subsidies could be its unique situation as a town with large numbers of poor students in private schools. That means that the private schools qualify for high-cost items at high levels of reimbursement usually available only to public school districts. That, in turn, means that dozens of independent institutions in the town are constructing their own pricey network infrastructures with E-Rate funds. None can take advantage of the economies of scale achieved by large school districts.

“The preponderance of high-discount private schools is really, really unusual,” said Dan Riordan, president of On-Tech Consulting, a New Jersey-based consulting firm that works with schools and libraries on E-Rate applications, of Lakewood’s high rates of subsidy. “It’s expensive to run a bunch of small networks.”